Markets Celebrate Excesses; Fed Chair Has Skin in the Game!

Powell didn’t provide a specific timeline for starting scaling back the Fed’s $120 billion-per-month in bond buying, a program started last year in response to the Covid-19 crisis. While the economy is on a strong path forward, the Fed will be carefully assessing incoming data to see how risks like the delta variant of the virus might impact progress toward its goals, Powell said.

How many times have we heard that gobbledygook?  It’s amazing to this old timer how events that were supposedly discounted weeks ago are celebrated by the market when they play out as expected. Worse, is when the often-celebrated event doesn’t live up to expectations or is a bust (like the U.S.-China trade deal), there is never a sell-off to return to reality!

In addition to the Fed being the ultimate “wealth inequality machine,” new research suggests that its policies have discouraged productive investments in the real economy. Also, there’s an inherent conflict of interest for Fed Chair Powell never disclosed.  Much, much more, including Victor’s incisive comments and conclusions.

Fed Decries a Wealth Gap It Helps Perpetuate, by Lisa Abramowiczs of Bloomberg:

Federal Reserve officials often decry the unprecedented disparity between the wealthy and poor. But they usually avoid mentioning the direct role they have played in widening these financial disparities over the past few decades.

The Fed is actively making the wealth gap more pronounced. Its policy of keeping interest rates near zero and buying trillions of dollars of bonds has suppressed volatility and turbocharged asset prices, fueling some of the biggest stock and bond returns in history.  As of March, the top 10% of wealthiest U.S. households owned an unprecedented 89% of all corporate and mutual fund shares outstanding. That compares with 84% 15 years ago, before the central bank embarked on any of its quantitative easing programs, Fed data show.

(And what we’ve argued for years): February research, “The Savings Glut of the Rich” by Atif Mian of Princeton University, Ludwig Straub of Harvard University and Amir Sufi of the University of Chicago, suggests that the lopsided distribution of wealth is more than a social issue; it’s dissuading productive investment. Instead, the study shows that wealthy people are parking more of their cash in debt funds, which account for a significant proportion of lending to U.S. governments and households. Basically, the U.S. and lower-income families are becoming more indebted, rich people have more money tied up in debt funds, and less money goes toward fostering innovation and prosperity.

(Powell has) Skin in the Game: FOMC Style, by Dylan Grice

According to disclosures required by the Orwellian-sounding “Office of Government Ethics,” FOMC Chair Jerome Powell’s private incentives are for continued inflation of asset prices.

The OGE requires members of the executive to file 278e forms disclosing the source of all income and assets beyond their public pay. The precise dollar value of holdings isn’t disclosed in the reports, but broad ranges are.

It’s difficult to see where Jerome Powell’s incentive is to “remove the punch bowl as the party is getting started (William McChesney Martin’s October 1955 speech).”  It's very easy, in contrast, to see his incentive to add an extra kick to it. Why? Powell’s net worth is heavily invested in financial assets as per this chart: 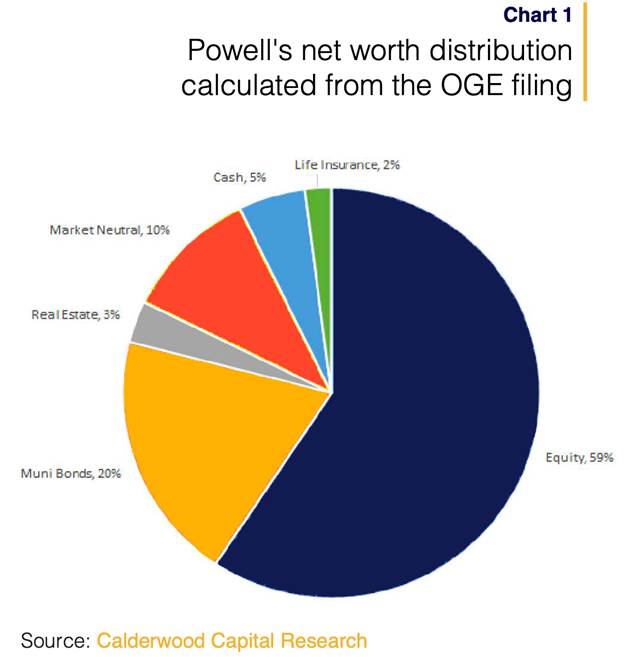 We find it noteworthy that around 60% of Powell’s net investable worth is in (primarily U.S.) equities, a share which is likely much higher today given the stellar performance of U.S. equities since the filing (+39% for the S&P 500).

Equally important is what is absent from the portfolio. In particular, we find it interesting that Powell owns no Treasuries. True, there’s an exposure to a more tax-efficient version – municipal bonds –, but if Powell’s portfolio is a variant on the classic 60-40, there’s a very clear under weighting of nominal assets relative to that framework.

I submit that the Fed Chair and any member of the FOMC should have their assets managed by a Blind Trust! That would eliminate any conflicts of interest.

Reserve bank credit, or interest-bearing assets on the Fed balance sheet, rose to $8.32 trillion, up $26 billion from a week ago.  That $8.32 trillion figure represents a 19% year-over-year increase, and 122% higher than the Fed’s holdings in August 2019.

The People’s Bank of China warned in its quarterly monetary policy report earlier this month that the U.S. faces the “most severe” inflation risk of any major economy, thanks to the fast-growing gap between the money supply and economic output. A bearish pivot from the Middle Kingdom would be no small development: China itself holds some $1 trillion in Treasury's, equivalent to 4.5% of total supply. Foreign creditors as a whole hold a record $7.2 trillion, or one-third of the public debt (The Fed owns ~ 25% of all Treasury’s outstanding).

Curmudgeon Comment: So, any way you cut the cake, recent U.S. Federal Stimulus programs have been greater than New Deal government spending after the Great Depression and 7 times spending for the 2009 Recovery and Reinvestment Act!

Most mergers in the U.S. are never looked at by regulators! Slightly more than 2,000 deals were filed to government antitrust enforcers between October 2018 and September 2019, the most recent period reported by the FTC and the Justice Department, which share antitrust duties. The government reviews account for about 10% of nearly 22,000 acquisitions or company investments announced in that period involving a U.S. company, according to data compiled by Bloomberg. 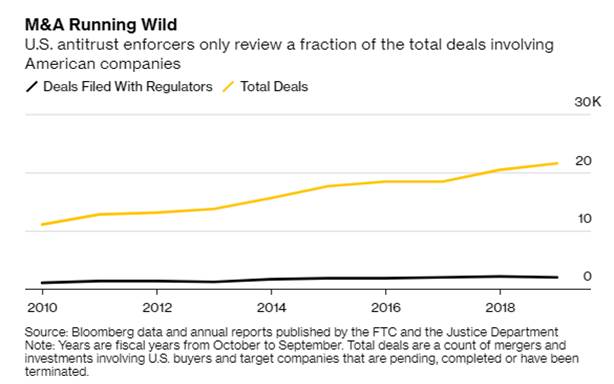 Startups had a blockbuster quarter for funding in Q2’2021, raising $156B in funding. Investors piled onto mega-rounds— the $100M+ deals accounted for roughly 60% of total dollars invested globally. 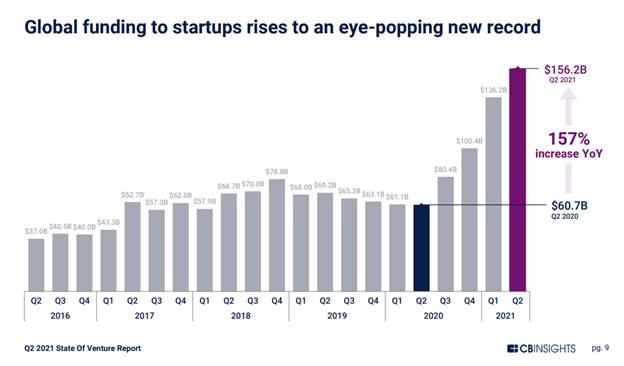 An outpouring of mega-rounds has helped drive the surge in venture dollars, with mega-rounds accounting for 58% of total funding in the second quarter. 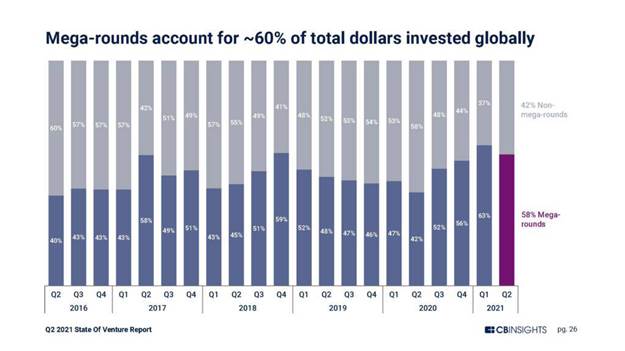 Exits in the quarter also reached an all-time high, with 2,893 IPOs and M&As — a 109% YoY increase. Didi Chuxing’s IPO at a valuation of $73B was the largest exit of the quarter.

We have little doubt that it will take a long period of austerity to correct the world's multi-generational debt binge...

The chart below illustrates the interest-rate environment that holds together this global house of cards. In July, the average interest rate across 20 [advanced] economies fell to 0.5%, a new low (by far) dating back at least a century. 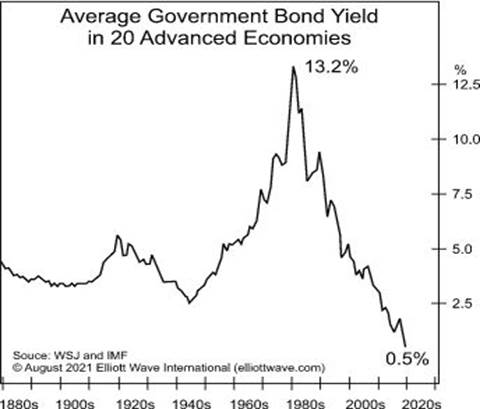 This chart below is a version of one published by Sidney Homer and Richard Sylla in their 2005 book: A History of Interest Rates. Astoundingly, it shows a potential 5,000-year low in both short-term interest rates and long-term interest rates. 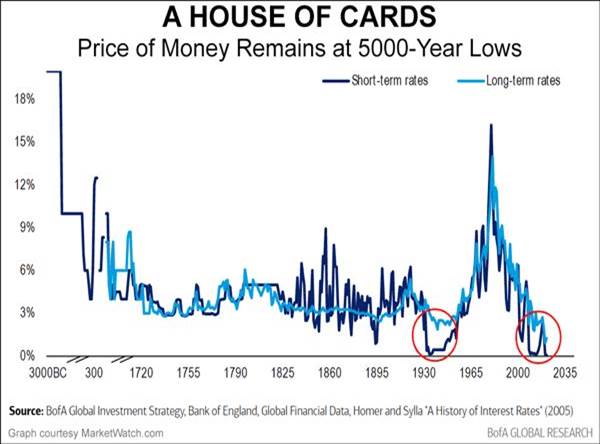 When interest rates start to rise, and it becomes difficult to service debt, a brutal austerity will be the order of the day.

Curmudgeon Comment: As Victor and I have stated so many times, there will be a huge price to pay for the Fed’s debt monetization that has repressed interest rates for so long and inflated so many bubbles.  See Victor’s Conclusions below.

Research shows that hangovers tend to worsen over time during periods of heavy drinking.  Yet the Fed has disregarded that maxim as it continues to figuratively “spike the punch bowl” with high proof alcohol!

At some point in time, foreigners will lose confidence in the U.S. dollar, sell Treasury’s in droves and crash the greenback.  That will cause interest rates to skyrocket along with U.S. debt service costs.  That, in turn, could set of more dollar selling.

Victor - It’s All About the Money:

Fast forward to July 2021:  Due to the incredible, stupendous increase in bank reserves, monetary base and M2 (since March 2020 when the Fed intervened as credit markets froze), the CPI has averaged 6.6% for the first seven months of this year. That’s an annual inflation rate of 7.9%!

MMT proponents say a country can print any amount of money (fiat currency) it desires to pay for huge government spending and budget deficits.  [For reference, please read MMT – When Theories Collide with Reality]

As we’ve clearly seen, the major consequence of such money “created out of thin air” is soaring investment markets and bubbles inflating everywhere.  That benefits the owners of the FED, Chairman Powell, and other asset holders, but it doesn’t do much for the real economy (see Fed Decries a Wealth Gap It Helps Perpetuate above).

The current mix of U.S. government fiscal policies and Fed monetary policies are a systemic risk to everyone’s way of life. It’s a game of musical chairs where the Fed finances huge government budget deficits seemingly without consequences, while asset prices rise nonstop to ever greater bubbles.

Sadly, it has to end with an eventual collapse of the financial system and the U.S. as a Constitutional Republic, then warping into a dictatorship when hyperinflation or bankruptcy conclude this madness. But no one can predict when that might happen?

History shows that the overturning of a government structure also comes with the death of the people who have most benefited from it.  A great example is the French Revolution as per the following quote.

“Little by little, the old world crumbled, and not once did the king imagine that some of the pieces might fall on him.”