We continue our new format of quick takes and charts for this week’s column.  Many thanks to readers who’ve emailed me (ajwdct@gmail.com) to approve it.

Again, readers are encouraged to email the Curmudgeon with any comments, suggestions, or concerns.  We take reader feedback very seriously!

GMO: WHEN THE DUCKS ARE QUACKING, FEED ‘EM

Stock issuance is the highest ever, as firms and Wall Street know when it’s time to sell to eager buyers. (Yet, the market has absorbed the new supply of stocks without blinking!) 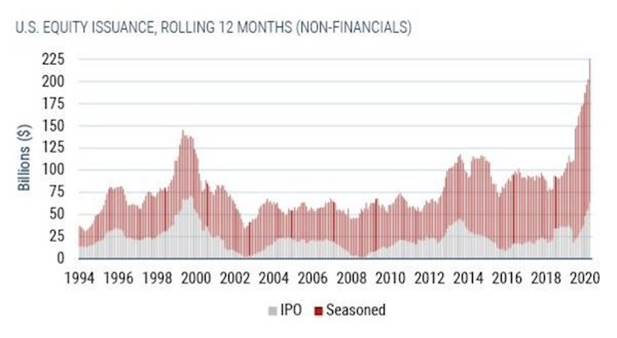 Source: GMO and Federal Reserve Board

Dubious new records: Yes, we are witnessing new price records for the S&P 500, NASDAQ, and a host of other markets. That, in isolation, should not be worrisome. What should worry you, though, is that records are being set on the valuation front. By almost any measure – forward or backward looking – we are staring at some of the most expensive valuations in history, especially in growth stocks. But we’ve talked about that inconvenient truth many times before. Here’s a new worry: Stock issuance in 2021 is also setting a new record, blowing away the last high set in the run-up to the Tech Bubble. This is a dubious item to celebrate if history is any guide.

There is never an unambiguous Batman-style beacon signaling a market top, but record-high stock issuance is an ominous sign that should have Gotham on edge. Wall Street knows an eager, price-insensitive buyer when it sees one. As the cynical expression goes, when the ducks are quacking, it’s time to feed ‘em.

Bloomberg: Wall Street Is the Most Bullish on Stocks in Almost Two Decades

It’s been two decades since Wall Street analysts were this upbeat. About 56% of all recommendations on S&P 500 firms are listed as buys, the most since 2002. It’s one more data point that shows the extent of the euphoria sweeping markets after a blockbuster earnings season.

While analysts are historically a bullish bunch, they’re turning even more optimistic in the face of relentless stock market gains and corporate earnings that topped even the highest expectations. For all the concerns about the delta variant, China’s regulatory crackdown or waning Federal Reserve stimulus, it hasn’t made much of a dent yet on stock prices. 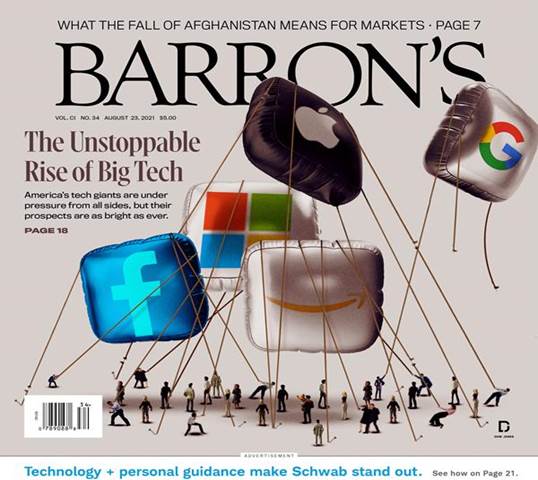 Nonetheless, the regulatory overhang is real, even if there are signs that the risks have been priced in.  Tech regulation is gaining steam in Washington, but the courts could hold back the most aggressive efforts. And some investors think that the worst-case scenario—forced breakups—could unlock value to the benefit of shareholders.

Apple, Microsoft, Amazon, Alphabet (Google), and Facebook now comprise ~25% of S&P 500’s total value as per this chart from Bloomberg:

Curmudgeon’s View:  I despise big tech companies, which are so pervasive they’re taking over our lives. Almost every day, I feel I’m hostage to Amazon, Google, and Microsoft (don’t use Apple or Facebook).  And you’re really stuck if you have a tech problem, especially with Amazon’s software.

Reference: Big Tech Companies Dominate the Stock Market but For How Long?

Frenzied consumption buying in the west has been coming off the boil since last winter, with leading economic data disappointing consensus expectations (below zero) since May US Citi Economic Surprise Index since 2016: 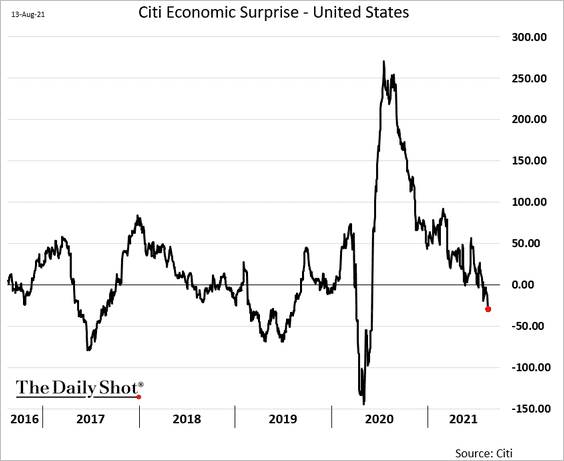 Amid record-low interest rates, (retail) prices have become so elevated relative to incomes that consumer buying conditions for big-ticket items (vehicles, housing, and durable goods) are now the worst in decades (shown here since 1975). 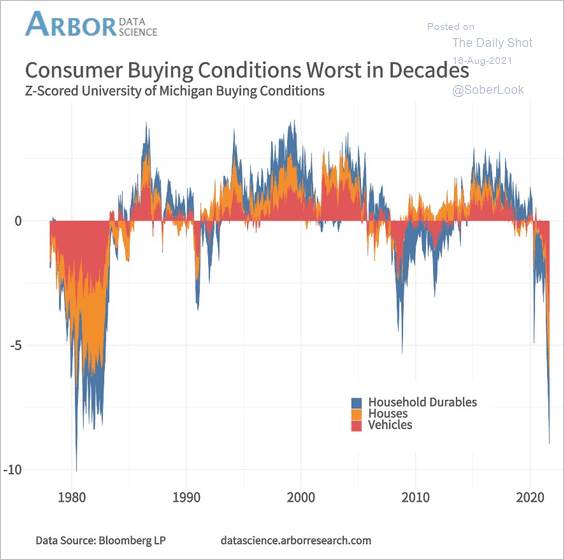 Meanwhile, stock prices have been trading in a world of their own dreaming. Wake-up calls are overdue.

Despite the S&P rallying on Friday to close at yet another new high, the McClellan Summation Index is negative. The worst possible combination for this indicator is when it is below zero and declining. That's when the worst selloffs happen. The current readings for the S&P 500 (SPX) and NASDAQ are now negative and declining as we see in the following two charts: 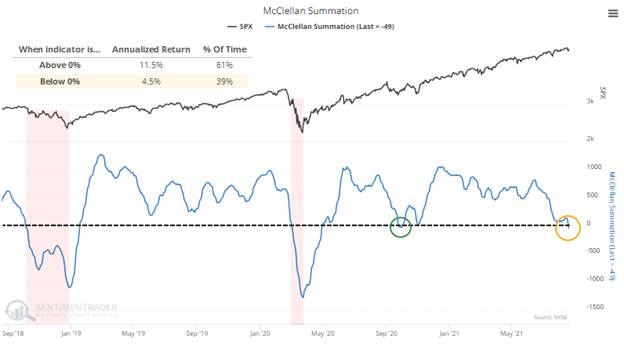 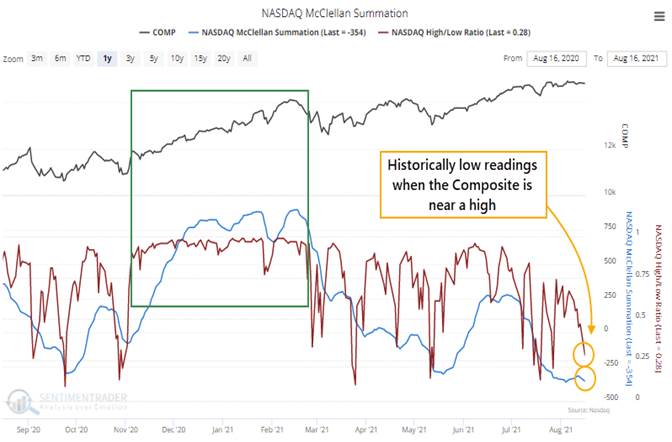 On the NYSE, there are also now more securities falling to 52-week lows than rising to 52-week highs. When this is below zero, the S&P's annualized return is only about a third of what it is when it's above zero.

Debate over QE within central banks is dominated by short-term considerations about the need for stimulus. Yet there is only weak evidence that accumulating or holding bonds helps economies much when, as now, financial markets are calm.

The trouble is that investors have been encouraged to interpret decisions about qe as a signal about when central banks might raise interest rates, a policy whose effects are more tangible.

The resulting sensitivity of interest-rate expectations to QE announcements makes the policy hard to unwind. The Fed is nervous about triggering another “taper tantrum,” the episode in 2013 when the suggestion that it might curtail its bond-buying shook markets (see End Quote below).

"To me, everything, everything–and I emphasize everything from here going forward through the rest of the year and certainly through 2022 and maybe into 2023–I believe is the inflation story.”   Peter Boockvar, Chief Investment Officer, Bleakley Advisory Group.

"If you plug in the current inflation rate over the past four quarters (about 4%), the gap between GDP and its potential for the second quarter of 2021 (about -2%), a target inflation rate of 2%, and a so-called equilibrium interest rate of 1%, you get a desired federal funds rate of 5%." John B. Taylor, The Fed's State of Exception.

“The Fed has trained investors to “buy the dip.” Not surprisingly, they jumped in at the 40-dma to buy rather than waiting for a test of the 50-dma. (Although it was on lower volume and weaker breadth.)”  Lance Roberts, Real Investment Advice.

“The S&P 500 is up 18% this year and sits just 1% below all-time highs, but a broader look at markets reveals a much less constructive tape. The U.S. yield curve is at a 1-year low, emerging markets are negative YTD and both copper and oil are down double digits from recent highs. Following a strong V-shaped recovery, there are many signs of slower growth.” Michael Hartnett, BofA Global Research Chief Investment Strategist.

“The S&P 500 tends to track the ISM PMI (which measures U.S. manufacturing production) and on a Y/Y basis, the ISM will likely turn negative by Oct. Supportive of Michael’s view, the BoA Global Industrials team noted that their Industrial Momentum Indicator, which tends to lead Global PMI, declined yet again. Michael expects negative returns for stocks and credit in the second half of 2021 and suggests investors own defensive quality. Longer term, Michael’s view remains that geopolitical risk and nationalism are inflationary.” Candace Browning, BofA Global Research Director.

“What the Fed worries about is that the minute it starts taking away the liquidity (tapering its bond purchases), markets will become not just volatile, but dysfunctional.”

Mohamed A. El-Erian, Chief Economic Advisor at Allianz, the corporate parent of PIMCO