The Federal Reserve Board said on Friday that its low interest rate policies and bond buying (QE to infinity?) are providing “powerful support” for the economy as it recovers from the coronavirus pandemic.

In its semi-annual report to Congress on monetary policy, the Fed indicated that it plans to maintain that support until further progress is made in recovering from last year’s coronavirus induced recession.

The U.S. central bank has kept its benchmark interest rate near zero, while continuing to buy AT LEAST $120 billion a month in Treasury bonds and mortgage-backed securities.  The Fed said Friday that these efforts will help ensure that “monetary policy continues to deliver powerful support to the economy until the recovery is complete.”

The report will be the subject of hearings in Congress next week, including testimony from Fed Chair Jerome Powell about the outlook for the economy, inflation, and the transition of monetary policy as the impact of the pandemic recedes.

We summarize and comment on the Fed’s report in this article summing it all up in Victor’s Conclusions.  Don’t miss the Chart of the Week and several precious End Quotes!

Shortages of materials and "difficulties in hiring" are holding back the U.S. economic recovery from the coronavirus pandemic and have driven a "transitory" bout of inflation, according to the almighty Fed:

"Progress on vaccinations has led to a reopening of the economy and strong economic growth. However, shortages of material inputs and difficulties in hiring have held down activity in a number of industries."

"Against a backdrop of elevated household savings, accommodative financial conditions, ongoing fiscal support, and the reopening of the economy, the strength in household spending has persisted," while the financial system remains "resilient," the Fed said.  Resilient or incredibly speculative?

With respect to its QE bond buying/debt monetization, the Fed said:

“These purchases help foster smooth market functioning and accommodative financial conditions, thereby supporting the flow of credit to households and businesses. The Committee expects these purchases to continue at least at this pace until substantial further progress has been made toward its maximum-employment and price-stability goals. In coming meetings, the Committee will continue to assess the economy’s progress toward these goals since the Committee adopted its asset purchase guidance last December.”

“The inflation rate over the longer run is primarily determined by monetary policy, and hence the Committee has the ability to specify a longer-run goal for inflation. The Committee reaffirms its judgment that inflation at the rate of 2%, as measured by the annual change in the price index for personal consumption expenditures, is most consistent over the longer run with the Federal Reserve’s statutory mandate. The Committee judges that longer-term inflation expectations that are well anchored at 2% foster price stability and moderate long-term interest rates and enhance the Committee’s ability to promote maximum employment in the face of significant economic disturbances. In order to anchor longer-term inflation expectations at this level, the Committee seeks to achieve inflation that averages 2% over time, and therefore judges that, following periods when inflation has been running persistently below 2%, appropriate monetary policy will likely aim to achieve inflation moderately above 2% for some time.”

An important question which no one seems to ask: Why is the Fed’s inflation target set at 2%?  Do workers get a 2% raise after taxes?  Is there a 2% hurdle for cost-of-living increases in social security or welfare payments?  If not, what’s so magical about 2% inflation?

The Fed attempts to answer this question in “Why does the Federal Reserve aim for inflation of 2% over the longer run?”  However, it never explains why a 2% goal was chosen.  Neither does this text from an official Fed blog titled: From inflation targeting to average inflation targeting:

“Since 1996, it has been understood among Fed policymakers that the (undeclared) target for inflation was around 2%. In January 2012, Chairman Ben Bernanke made this implicit inflation target explicit and official.”

One of the Fed’s two mandates is to achieve “PRICE STABILITY.” In a 2% INFLATION ENVIRONMENT, prices double in 36 years. That means home prices double in 36 years at a minimum. What of the new families that want to buy a home and can’t afford to do so (even if mortgage rates were zero)?  Are they collateral damage for the Fed’s 2% inflation target?

It bears repeating that increases in money supply (M2) are the real inflation and price increases are the result (assuming money velocity increases along with M2).

I believe the Fed aims to help big business and enable the government to get additional revenue without increasing taxes. Their monetary policy is not for the benefit of America’s workers.

Also, the Fed says it wants inflation to “average 2% over time.” What time period is that?  Why not start measuring inflation after the U.S. went off the international gold standard in August 1971?

On example that we recently wrote about is the mania in junk bonds.  It’s only gotten more insane since then.  The WSJ reported on Saturday that for the first time ever, the interest rate investors receive for investing in the riskiest U.S. company debt fell below the inflation rate.

A rally in corporate debt rated below investment grade has pushed yields to record lows around 4.57%, according to ICE Bank of America data through Thursday, while consumer prices rose 5% in May compared with a year earlier.  As of July 8th, the St. Louis Fed calculates the junk bond yield at 3.97% - an all-time low.

That marks the first time on record junk-bond yields have dropped below the rate of inflation, according to Bespoke Investment Group. 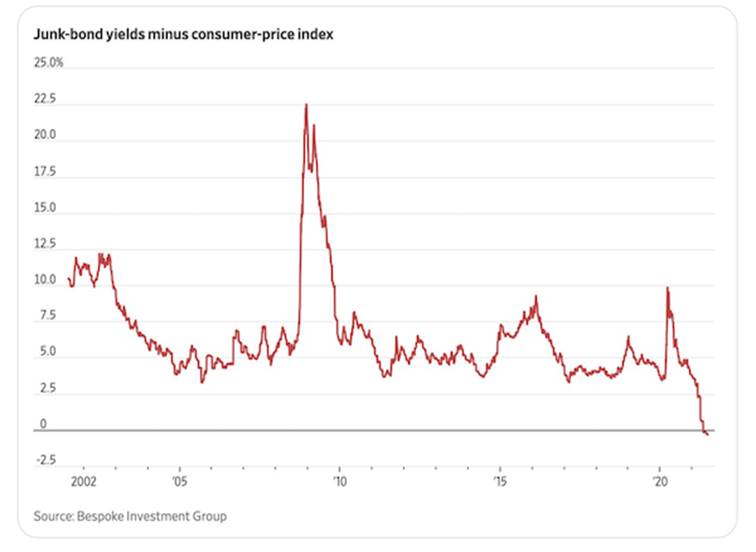 Meanwhile, the spread investors demanded to hold speculative-grade debt instead of U.S. Treasury was 2.62% as of July 6th, according to Bloomberg Barclays data. That is down from more than 10% in March 2020.  Compare 2.62% to the historical average high yield spread ~5.2%.

It’s actually far more egregious than that. An index of the riskiest junk bonds – rated CCC – has increased by 30.91% in the last 52 weeks.

Gennadiy Goldberg, U.S. rates strategist at TD Securities, said the inversion indicates investors are chasing returns far and wide in a low-rate environment, even in riskier places. “This is a function of too much cash in the system and too few attractive assets for investors to put their cash into,” he said.

Through June, equity mutual funds and ETFs have taken in more than $122 billion in assets, according to Lipper. That's the best first half for flows in almost 20 years. The only first half that exceeds this flow, in or out, was the pandemic-inspired outflow last year at the March 2021 lows. Two charts tell the story better than words: 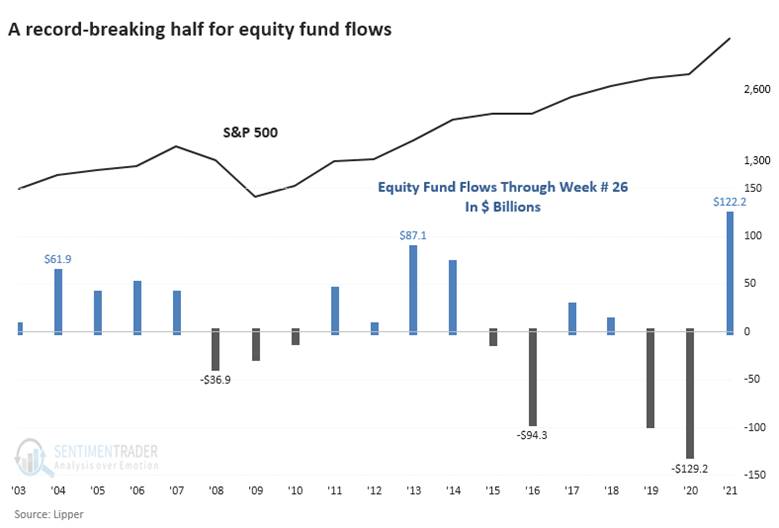 Economist - Tapering without the Tantrum (?):

In America it looks increasingly weird that the Federal Reserve is the biggest buyer of Treasuries, as it was in the 1st quarter of 2021. The U.S. labor market seems to be powering ahead with many job openings. In June it added a stronger than expected 850,000 jobs, according to figures released on July 2nd That’s despite a very low labor participation rate.

On Wall Street, cash is so abundant that over $750 billion is being stashed at the New York Fed’s reverse-repo facility (RRP) most nights, mopping up some of the liquidity injected by the Fed’s QE. On June 30th RRP absorbed nearly $1 trillion. The Fed’s purchases of mortgage-backed securities, given the red-hot housing market in the U.S., now looks incredibly bizarre.

Some central banks have already begun to scale back their asset purchases. The Bank of Canada began curtailing the pace of its bond-buying in April. The Reserve Bank of Australia said on July 6th that it would begin tapering its purchases in September. The Bank of England is approaching its £895 billion ($1.2 trillion) asset-purchase target and looks likely to stop qe once that is reached.

By comparison the Fed has been reticent to even say anything meaningful about scaling back QE. Last month, Fed Chair Jerome Powell, said that the central bank is “talking about talking about” tapering its purchases of assets. Minutes of the Fed meeting preceding his comments, released on July 7th, revealed that officials thought it “important to be well-positioned” to taper. Most economists expect an announcement by the end of the year. Don’t hold your breath!

Global central banks’ balance-sheets will have grown by $11.7 trillion during 2020-21, projects JP Morgan Chase (see chart below).  By the end of this year their combined balance sheet size will be $28 trillion—about 3/4 of the market cap of the S&P 500.

Separately, BofA Global Research says that during the past 15 months, there was a total of $30 trillion of global monetary and fiscal stimulus announced. That’s more than the stated total national debt of the U.S. government.

Bof A Global Research has $3.2 trillion in AUM right now.  Their clients have an all-time record high of 64.9% in stocks (vs. a 55% average equity allocation since 2005). The bank said that the very low level of yields and Wall Street dependence on the Fed remain key reasons why stock and credit “investors” still believe in TINA (there is no alternative). 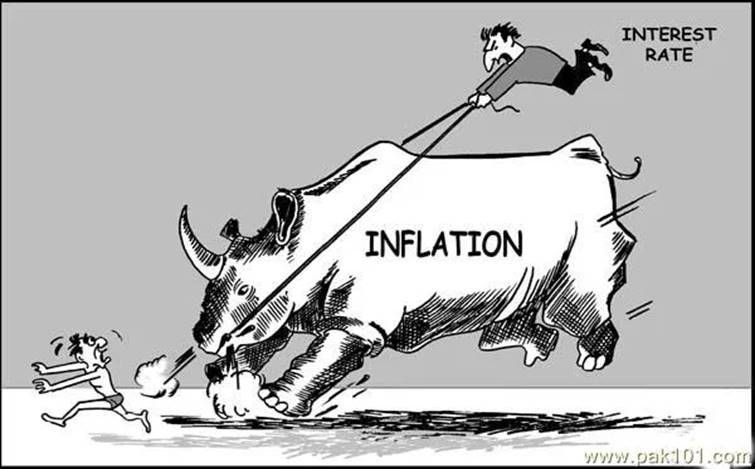 Yet those who propose the Fed’s ultra-easy monetary policies also preach inequality is bad. Yet they never criticize the Fed, which has greatly widened income inequality by pumping up asset prices with “money created out of thin air.” Indeed, Jim Bianco has called the Fed “the greatest inequality machine” of all time.

In reality, the Fed is as corrupt an institution as any in DC.  If the economy slows after the Fed scales back its bond buying/money printing later this year or next, it will surely be increased again to keep the economy strong for the 2022 midterm elections.

The Fed will make forecasts to further its own cause -power! We all should assume its “guidance” is made up to fool most of the people most of the time.

“After eight years as President I have only two regrets: that I have not shot Henry Clay or hanged John C. Calhoun.”  Andrew Jackson.    (Both men were pro central bankers).

“Henry Clay was a lifelong promoter of central banking and participated in a pitched political battle with President Andrew Jackson over the rechartering of the Bank of the United States in 1831—a battle that Jackson won. One reason Clay was such a strong proponent of central banking was that he saw it as a tool for lining his own pockets.” (As the owners of the Fed do today).

“A power has risen up in the government greater than the people themselves, consisting of many and various powerful interests, combined in one mass, and held together by the cohesive power of the vast surplus in banks.” John C Calhoun.

Enjoy summer, go to an outdoor concert, read a good book, visit with friends and family, and till next time…….