Those looking for above-trend economic growth and inflation have a lot of company.  That’s best exemplified by a Bank of America Research survey of institutional investors.  However, there is a strong dissenting view from ShadowStats’ John Williams.  Both agree that inflation is accelerating, as we’ve chronicled in recent posts such as Sperandeo/Curmudgeon: Critque of the Fed’s “Transitory” Response to Rising Inflation.

We’ll examine highlights of both views in this article.

Michael Hartnett’s Bank of America Research monthly Fund Manager Survey (FMS) shows that 69% expect to see both of these.  That’s a record high as per this chart: 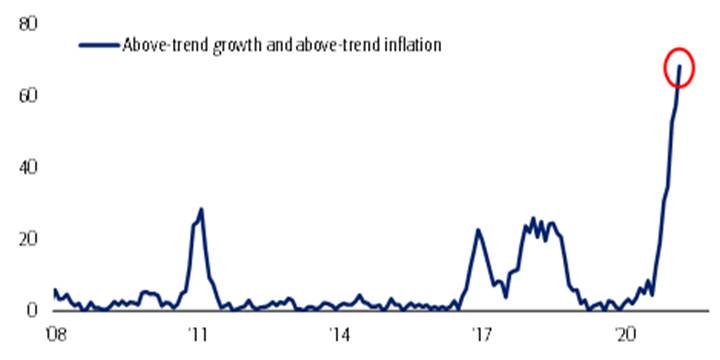 Hartnett says 69% of respondents expect "above-trend" growth and inflation which is a record high, but it’s not yet "stagflation."  A net 84% of FMS investors expect a stronger economy (down -6ppt Month over Month), but still near all-time highs.

(Net % of respondents say the global economy will improve):

Similarly, a net 83% of FMS investors expect higher inflation in the next 12 months, (down -10% Month over Month), but still extremely high.

Which of the following do you think best describes the global economy in the next 12 months?

Those bullish views have pushed fund managers into commodities and late-cyclical stocks.  Overweight positions in those areas are close to 15-year highs.

Those and other risks are illustrated in this chart:

With such bullish views on growth and inflation, the obvious risk for investors is that growth slows, and inflation proves to be “transitory.”

Or conversely, that the economy will actually be much weaker than the heady forecasts which are so prevalent these days.

The Citigroup Economic Surprise index, which measures the degree to which economic data is either beating or missing expectations, dropped recently as some of the key economic data came in weaker than the consensus expectation. That index is flirting with turning negative for the first time since mid-2020.

·       The April 2021 Non-Farm Payrolls report came in well shy of expectations, leading to a big debate about whether the labor market is already getting tight.

·       The recent CPI report came in significantly higher than expected, thanks to certain categories related to economic reopening.

·       Housing starts fell much more in April than economists predicted, owing to a litany of constraints including land, labor and lumber.

·       Overall, expectations for growth remain quite robust. However, it’s starting to look like some level of reality is now setting in.

John Williams on the U.S. Economy:

ShadowStats’ John Williams takes a strong contrarian view of the U.S. economy.  In particular, he states on his website that:

• The Pandemic-Driven GDP Collapse appears to have been Understated and the economic rebound Overstated.

a] April 2021 Housing Starts Dropped by a Statistically Meaningful 9.5% (-9.5%) in the Month, on Top of a First-Quarter Contraction.

b] Despite April 2020 Automobile Assemblies in Production Holding Down by 22% (-22%) from February 2020 Pre-Pandemic Peak Activity, Nominal Retail Sales of Automobiles Were Up by 33% in the same period.

• Major Downside Economic Revisions will be forthcoming in the near future.  Annual Benchmark Revisions to key economic series have been recently released or are pending, with major negative implications for the GDP’s Annual Benchmarking on July 29th.

a] On May 14th, for example, the Census Bureau published major downside benchmark revisions to Manufacturers’ Shipments, Inventories and Orders (2013-2020) [including nominal New Orders for Durable Goods (NODG), which were revised lower by- 5.5% in 2020.

b] Also on May 14th, the Federal Reserve scheduled for May 28th release its long-pending (multi-year delayed) major downside revisions to its Industrial Production master series.

c] Next is the May 27th Bureau of Economic Analysis (BEA) Second-Estimate of First-Quarter 2021 GDP.

d] Where the Fed revised its annualized First-Quarter 2021 Industrial Production growth May 14th) from 2.5% to 1.2%.  That should take a notch out of revised First-Quarter GDP growth, as will today’s May 18th benchmark reporting of New Residential Construction.

• April 2021 Annual Inflation Soared to Record or Decades-High Levels as per PPI and Core CPI rates:

Sum and substance of the forthcoming economic headline number revisions, pending and otherwise, is that the Pandemic-Driven Collapse of the U.S. Economy was much worse than headlined, and the recovery from same is far shy of where it has been hyped to be.

GDP has been a lot weaker than reported.  We expect U.S. industrial production to be revised downwards, which will cause the 1st Quarter 2021 real GDP to be lower than the initial BEA estimate of 6.4% (annual rate).

In conclusion, the underlying economic reality remains much closer to the ongoing depression level of activity reflected in the recent headline Payroll Employment numbers.

Stay safe, be healthy, take care of yourself and each other, and till next time……