Know-Nothings are the New Wizards of Wall Street

Stocks, IPOs, SPACs, Real Estate, Cryptocurrencies, etc. have all been experiencing the type of euphoria that are typically seen at major market tops.  We’ve chronicled all those and more in previous Curmudgeon/Sperandeo posts, but that hasn’t stopped the associated greed and speculation.

We constantly hear talk like: “It’s a generational-buying moment,” or “retail investors defeat hedge funds,” or a “new Roaring 20’s” is ahead, and (of course) “no risk of losses because the Fed will always buy/bailout investors on any serious market decline.”

How long will such talk go on before the bubbles eventually burst?

Risk is a Thing of the Past:

The underlying emotional mindset of today’s “investing” crowd is best exemplified by this chart: 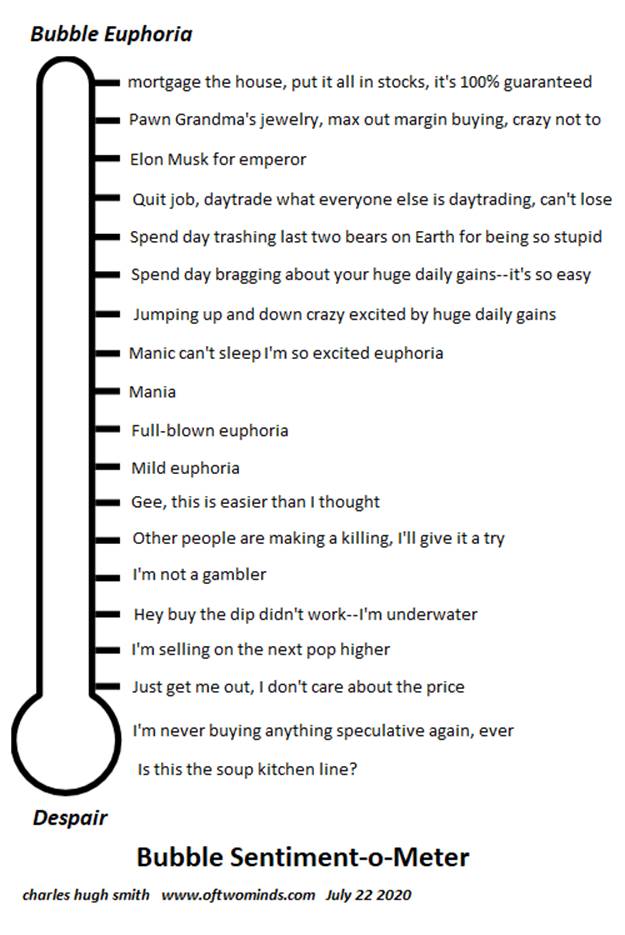 Perhaps, the most frustrating thing to this author is the discrediting of financial professionals with decades of experience in both bull and bear markets.

For most of the last 100+ years, those investors who worked the hardest at learning the most, were disciplined, and had a great respect for risk, were the most successful and admired stock market participants. Now the glory often goes to those who know the least and don’t even care. That has turned the traditional investing hierarchy upside down!

Why waste time and energy educating yourself about stocks or the economy when sheer ignorance pays off so easily?

A backlash has emerged against the experienced professional, to the point that someone with "a knowledge of history and value is eventually judged as an impediment to success."

Newcomers now revel in their ignorance. The chart below, from The Wall Street Journal, shows the "Rise of the Know-Nothings." It's derived from the postings on WallStreetBets' Reddit forum of GameStop fans.

In the wake of GameStop's peak on January 28th, the percentage of those professing stock market ignorance spiked to about 3% of those posting on WallStreetBets. The use of terms such as "stupid," "idiot" and "no idea what I'm doing" identified the know-nothings... The percentage of know-nothing references [spiked] to a high of almost 11% on March 14. So, the foundational basis for the New Era is idiocy.

Historically, such market psychology signals an end -- not the beginning -- of a financial boom.  As we’ve noted many times, this time has been different, largely due to the “free money party,” that has been perpetrated by the Fed (printing money/QE + buying bonds/junk bond ETFs) and the U.S. Treasury (stimulus payments used to speculate in stocks).

What could possibly go wrong?

We believe a “black swan event,”like cascading hedge fund blow-ups, could precipitate the end of multiple bull markets followed by waterfall declines across the board as liquidity dries up.

The Archegos hedge fund blow-up illustrates the dangers that may lie ahead.  Several large investment banks were abruptly pummeled by a series of mysterious, whale-sized trades. Goldman Sachs and Morgan Stanley — two Wall Street powerhouses — were dumping multibillion-dollars’ worth of stock in companies like Viacom and Discovery, the media companies.

Hwang built up a huge position in derivatives on stocks built on borrowed money. In late March, he was unable to offer his bankers enough collateral to meet a margin call, so they were forced to quickly liquidate his assets.  Some banks took humiliating, multibillion-dollar losses when they couldn’t sell Hwang’s positions fast enough.

Last week, Credit Suisse Group asked investors for up to $2 billion in fresh capital after losses from Archegos were much more than previously disclosed.  The Swiss bank has been buffeted by the twin crises of the Archegos loss and the collapse of another client, Greensill Capital. It said it would take another $655 million charge related to Archegos, adding to a $4.7 billion charge in the first quarter.  Credit Suisse said that it only had a small remaining exposure to Archegos after selling 97% of its related positions by the end of last week.

Many knowledgeable analysts and investors believe that the Archegos debacle is NOT a one-off situation but is symptomatic of a broader and subtle danger to financial markets: leverage.

“For all the best laid plans there are shocks we fail to forecast and feedback loops that we cannot fully understand until after they happen,” he observed in a recent report. “When leverage is the underlying explanation behind what appears to be a series of individual episodes in financial markets — the latest being Archegos — the narrative will probably evolve from idiosyncratic to systemic risks.”

We’ll return to that theme later in this article.

Checking the FINRA website, we find that margin debt increased ~$9 billion to $822.55 billion at the end of March 2021 – yet another all-time high!

It’s one thing to suffer a significant loss when one owns shares outright, but quite another when speculator has leveraged their bets using borrowed money.

“It’s very difficult not to be nervous.  It’s classic stuff that after a correction we’ll look back and say the signs were all there,” said Richard Buxton, a veteran UK equity manager at Jupiter Asset Management.

The End Game for When the Music Stops:

Most “investors” don’t realize they’ve been playing a game of Musical Chairs for years and are dancing what seems to be never ending music.  What happens when the music stops and there are no more chairs left?

We envision a scenario where a black swan event triggers "forced selling" by brokerage houses, when "maintenance margin requirements" of hedge funds or family offices are not met.

In a terrific article titled, “The Stock Market Is Just One Hedge Fund Blowup Away from a Crash, Pam Martens writes:

Every American should be up in arms over this (the Archegos fiasco) because the banks involved with Archegos also own federally insured deposits. If those banks blow up again because of their casino culture and tricked-up derivatives, it will be the American taxpayer that once again has a gun put to their head to come to the rescue — in a replay of the bailouts of 2008.

Five U.S. banks are holding $2.66 trillion in stocks and the public has no idea if the stocks are actually owned by these banks or by overleveraged, reckless hedge funds, which have a history of blowing themselves up.

Three of those five banks (JPMorgan Chase, Bank of America, and Citigroup’s Citibank) are the three largest federally insured banks in the U.S. Together, the insured banking units of these three financial institutions hold more than $4.8 trillion in deposits.

Many large family office hedge funds are not reporting their stock holdings in a 13F filing with the SEC and, thus, might have a similar type of derivative swap contract with the banks, as did Archegos.

Furthermore, we think that the “buy the dip” mentality, which has for so long dominated the average retail investor's stock market activity, might result in many inexperienced and unsophisticated new speculators (that never experienced a real bear market) to buy more stocks (or call options) on margin.

The ensuing stock market decline could be further exacerbated by the recent trend of selling put options with low premiums (due to very low volatility and rock-bottom short-term interest rates).  If the market drops suddenly, those put options would increase exponentially creating large losses for naked options speculators.   There’s an old saying (which has been ignored since at least March 2009): Never try to catch a falling knife!

The Great Taper May Have Already Started:

Bank of America Global Research predicts that the ultra-easy and unconventional monetary policies of the world’s central banks will soon end.

To recap, BofA says there were a total of 201 central bank interest rate cuts since February 2020 and 989 since the start of the global financial crisis (GFC) in September 2008. Even more astonishing is that global central banks purchased $1 billion of financial assets every hour since February 2020 ($21 trillion since the GFC).  The issuance of U.S. Treasuries in 2021 will easily exceed the GDP of Germany! And whom do you think bought most of those Treasury securities?  THE FED!

Bank of Canada has already taken the first step of tapering.  Bank Governor Tiff Macklem said on April 21st that purchases of government debt would be reduced by 25% to C$3 billion ($2.4 billion) and the timetable for a possible interest-rate increase would be accelerated.

Could that be a leading indicator that global central banks will start a tapering campaign?  If so, will the oceans of liquidity in the markets dry up accordingly?

Greed can quickly turn to fear when investors realize that their profits are eroding fast, and that their leveraged positions begin to take on an unexpected velocity of losses that catches most speculators/ “investors” by surprise.  The market neophytes (which have never experienced a prolonged, grinding bear market) will likely be in a state of shock - totally unprepared to deal with the sudden negative emotions of denial, false hope, and wishful thinking.

Will this time be any different?  Time will tell.

“Just remember, without discipline, a clear strategy, and a concise plan, the speculator will fall into all the emotional pitfalls of the market - jump from one stock to another, hold a losing position too long, and cut out of a winner too soon, for no reason other than fear of losing profit.

Greed, Fear, Impatience, Ignorance, and Hope will all fight for mental dominance over the speculator. Then, after a few failures and catastrophes the speculator may become demoralized, depressed, despondent, and abandon the market and the chance to make a fortune from what the market has to offer.”  Jesse L. Livermore 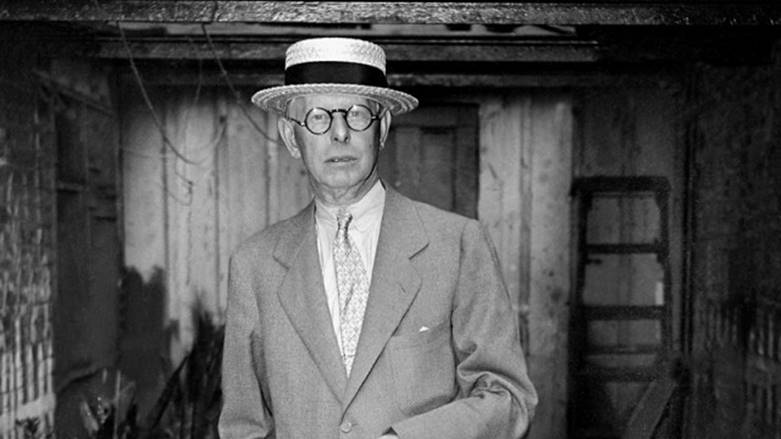 Jesse Livermore started his first and only job as an employee at the Paine Webber investment bank in Boston, MA. He soon earned more money trading at bucket shops then at his official job.  Livermore’s first big win came in 1901 (at the age of 24) when he bought stock in Northern Pacific Railway. He turned $10,000 into $500,000.  He had a unique respect for risk and emotional discipline.

Stay calm, be healthy, optimism is the word, and till next time……