When do bull markets end? Historically, it’s when buying power/pressure is exhausted.  After a long, sustained rise in prices investor sentiment becomes euphoric.  That’s a strong confirmation that the vast preponderance of money that can be attracted to the market has already been committed.  In the past, this exhaustion of sideline buying power led to a market top as profit taking from pros overwhelmed amateur latecomers that wanted to “get in on the action.”

BUT THIS TIME HAS BEEN DIFFERENT!  We examine why in this post. Victor then provides his unhedged market comments and assessment.

Equity funds have attracted more money ($576 billion) in the past five months, then all the inflows recorded over the previous 12 years ($452 billion), according to data from BofA!  In the past week alone, a net $15.6 billion went into stocks.

BofA private clients, with $3.1 trillion assets under management (AUM), have a record 63.6% allocated to stocks. Compare that to 39% in February 2009 - one month before the market bottom. The investment bank has equated this stampede into stocks as a "melt-up" in markets.

Sentiment has become overwhelmingly bullish. The latest sentiment survey by American Association of Individual Investors (AAII) showed retail investors are their most bullish in the past three years.

No one seems to worry that the market has become incredibly expensive.  The new mantra seems to be “buy high, sell NEVER (not higher).”

For example, the S&P 500 trailing P/E is now 46.92 vs 21.19 one year ago.  That’s a P/E expansion of 121+% (stock prices rose while earnings decreased over the past 52 weeks).  The S&P index made its fifth new all-time closing high in the month of April and fourth new all-time high this past week alone!

The P/E of the Russell 2000 cannot be calculated, because the cumulative earnings of the underlying companies are negative!

Meanwhile, volatility has been collapsing.  The VIX (CBOE volatility index) hit a recent closing low of 16.67 on Friday, April 9th.  That’s the lowest level since early 2020.  The VIX was 37.21 on January 29th.  Such current low volatility is a sign of extreme “investor” complacency.

Indeed, many traditional market-top signals, ranging from retail investor surveys to valuations, have been flashing red for some time.

Yet it seems few if any have heard bells ringing? Nothing has been able to stop the inexorable rise in stock prices. 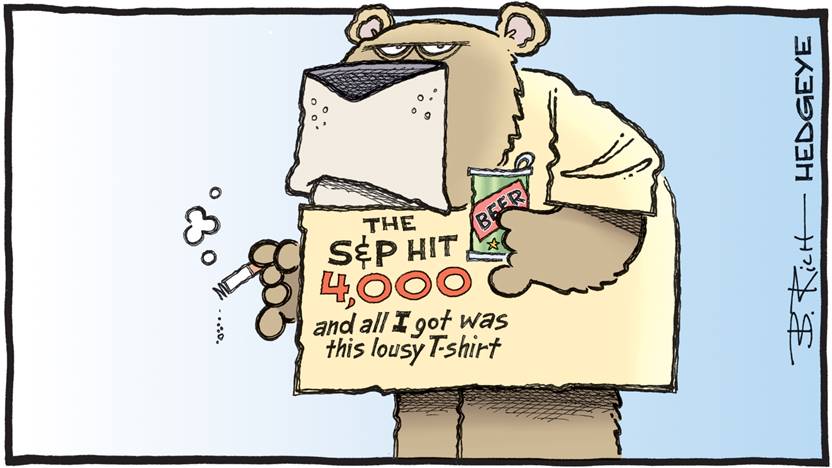 You may think the stock market is a discounting mechanism? We don’t!  A BofA earnings per share (EPS) model for global equities is peaking this month and expected to roll over (please refer to the chart below).  The model is composed of Asian export growth, global PMI, US Treasury yield curve and Chinese financial conditions.

SoGen’s Albert Edwards wrote in a note to clients:

“The highly regarded Chicago Fed National Activity Index (CFNAI) collates 85 U.S. economic indicators into an aggregate measure. It is calibrated so that zero represents trend GDP growth. The economic activity in February has fallen back to trend – only around 2% or slightly below. It may be this data is an anomaly but keep a very close eye on this as given the recent rally, the market is now very vulnerable to cyclical disappointment.”

For Q1 2021, the estimated earnings growth rate for the S&P 500 is 24.5%, according to Factset. With stock valuations so high, there’s little room for disappointment in future earnings.  That implies that if the U.S. economy slows after the anticipated first half 2021 pop, corporate profits will decline leaving the stock market quite vulnerable to a selloff.

Keith McCullough of Hedgeye says the pros were bearish going into last week. In an email to clients, he wrote: “Wall Street is short the S&P 500 by a net -44,528 (futures) contracts.  We told you it would be a short squeeze. That’s the thing about short squeezes, when volatility goes into this bucket and volatility goes into the teens and falling toward 10, it’s bullish.”

"Goldilocks and melt-up are popular terms this week and we think that can be seen through market valuation," said Emmanuel Cau, head of European equity strategy at Barclays. "We remain optimistic but there’s less upside left in our view."

"You should definitely be worried about valuations and all the more so when people start justifying extremely high valuations," said Fahad Kamal, chief investment officer at Kleinwort Hambros.  "We are risk-on, but we haven't put our foot down on the accelerator because of valuations in some parts of the market."

"We see reasons to expect periodic bouts of higher volatility in the near term," analysts at UBS Global Wealth Management said in a report published Friday.

"Very near term, we expect equities to continue to be well supported by the acceleration in macro growth and see buying by systematic strategies and buybacks driving a grind higher. But we expect a significant consolidation (-6% to -10%) as growth peaks over the next three months," Deutsche Bank Chief Strategist Binky Chadha wrote in a research note to clients on April 6th.

Charles Hugh Smith: “If we compare financial-bubble assets (Cloud Castles in the Sky) to the nation’s Gross Domestic Product (GDP), a (flawed) measure of real-world activity, we find financial bubble assets are worth over six times the nation’s real-world economy. This reflects what happens to the valuations of Cloud Castles in the Sky when “money” is created out of thin air and then leveraged into fantastic, monstrous illusions of “wealth.” 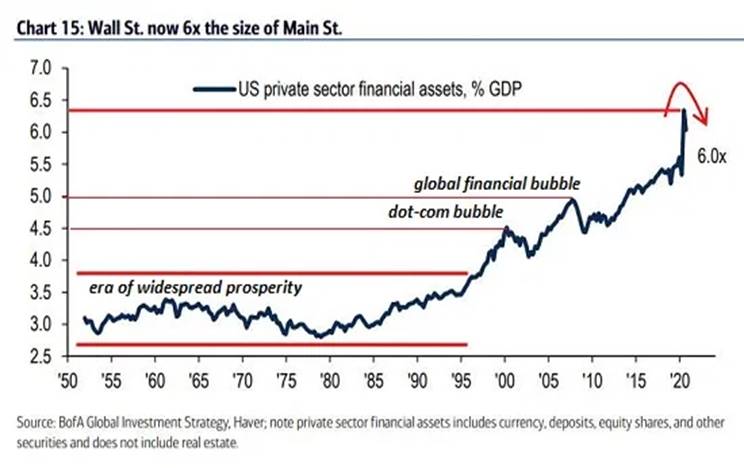 Welcome to The Twilight Zone!

No society in the history of the world has ever had these kinds of free money policies, which benefit those in power and thereby widen income inequality.

My current market views are as follows:

·       Risk on with equities continuing to rise until the U.S. spending bills (e.g., infrastructure) are complete.

·       Bonds - choppy to down, especially if inflation is perceived to be rising rapidly.

·       Silver is the most undervalued asset at this time.

“This over eagerness to buy is a classic sign of a bubble.”  Unknown

“Speculative bubbles are most typically a function of leverage, which takes its cue from aggressive lending practices (when uncollateralized paper loan claims dwarf the pool of reserves of the system).” Paul Brodsky and Lee Quaintance

“To ultimately survive, it is also essential that you become aware of the (warning) signs of a bubble and avoid them at all costs. You will probably leave profits on the table but will also avoid the painful and debilitating financial collapse that follows along with those who were either too short-sighted or greedy to avoid entrapment in the Pollyanna Paradox.”  Matt Blackman

–>Stay tuned for part II of Who Controls the United States of America? with fresh insights from Victor.  We’ll try to post that piece tomorrow.

Stay calm, be well, life will get better, and till next time……