Check back next week for a more in-depth article on a topic (TBD) we feel is important, yet neglected by the mainstream media.  Readers are invited to email the Curmudgeon (ajwdct@gmail.com) to suggest a topic(s) they’re interested in for Victor and I to pursue.

Juan Carlos Artigas, head of research at the World Gold Council told Barron’s: “Gold is a global market.” Indeed it is.  The reduction in interest rates worldwide, high global risk, geopolitics and trade tensions have investors looking to hedge their portfolios by buying physical gold, gold futures, or gold ETFs (e.g. GLD).  Artigas says that Biden’s victory could lead to concerns over higher taxes and larger budget deficits, and a correction in the stock market, he says. Large deficits can boost gold’s appeal as a safe haven investment (see Victor’s Comments below for tech stocks as the new safe haven).

On Friday November 6th, December 2020 (near month) Gold futures closed at $1951.50 – a seven week high, while the U.S. Dollar sank to a six-year low against the Swiss Franc.  Gold and silver prices rebounded strongly on Thursday and Friday. Those price moves could have reflected increasing political uncertainty in the markets, or expectations of greater dollar debasement and inflation under a Biden Administration.

Major central banks sold gold in the third quarter of 2020 and their gold reserves were reduced by 12.1 tons. That was the first time in 10 years they’ve been net sellers of the precious metal. The increased supply of Gold available led to a quick $20 fall in price to $1870.78.  That drop has now been recouped and then some at Friday’s close of $1951.50.

Central Bank net purchases of Gold during the initial three quarters of the year totaled 220.6 tons, World Gold Council said. The central banks are expected to remain net purchasers in 2020, though at a slower pace when compared with the previous two years. The notable buyers during the quarter were the UAE ((7.4t), India (6.8t), Qatar (6.2t), Kyrgyz Republic (5t), Kazakhstan (4.9t), and Cambodia (1t). 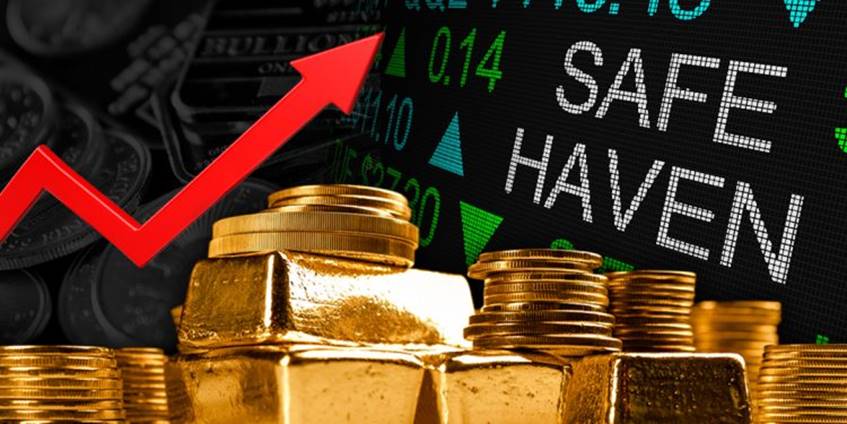 Uncertainty about a second coronavirus wave could propel gold to $2,000 per ounce (or higher) next week, said Afshin Nabavi, vice president at precious metals trader MKS.

“We are now at around $1,950-55. If we can get above that, I think $2,000 is in the cards,” Nabavi said. “Economy is in deep trouble around the world because of the pandemic, stimulus packages will keep on printing money, and the precious metal will benefit on the upside.”

SeeNews analysts believe that the yellow metal will rise in the medium term as investors are optimistic about Biden’s victory, yet, prices will observe a drop in the long term as the new president is expected to ease the trade war and provide a better medical system against the pandemic. Analysts see a sharp drop once a COVID-19 vaccine is announced, reaching 2018 gold price lows of around $1,200 an ounce.

For perspective, the chart (courtesy of goldprice.org) below shows gold has been in a major bull market since its 2018 lows of approximately $1200: 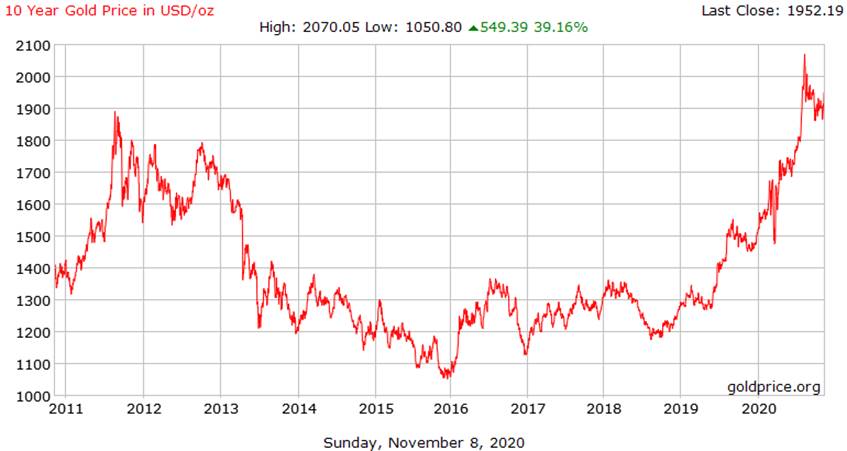 When compared to financial assets like stocks and bonds, precious metals are a relatively inexpensive asset class.  Gold and silver are expected to benefit from large fiscal spending plans, no matter who is finally confirmed as the next U.S. President.  As usual, the Fed will be a major printing money tool to boost all asset classes.

If  Biden is confirmed as President [1.], his 110 page “Manifesto” (Unity Task Force Recommendations) has MMT (Modern Monetary Theory) proponent Stephanie Kelton writings all throughout the document. Thereby, a great deal of federal government money printing “to spend” will be done in addition to the Fed’s seemingly endless rounds of QE. That augurs well for higher gold and silver prices.

Note 1.  It should be noted that the State Legislatures, NOT news outlets, elect the U.S. President via the Electoral College. The media has absolutely no say as to who is elected President. They seem to be trying to psych the courts into NOT ruling against voter fraud in the key battleground states.

The Certificates of Ascertainment must be provided to the Electoral College not later than December 14th (Monday after the second Wednesday in December of presidential election years). In the event of a contested election in a state, a governor has up until December 8th, which serves as a "Safe Harbor" deadline to provide certified election results.

On December 14th, Electoral College delegations meet separately in their respective states where the electors cast paper ballot votes for the President and Vice President.

Gold is predicted to go to $2,500 before the end of the first quarter by most gold bulls. I think that is quite reasonable.

If you divide the amount of gold owned by the US (291 million ounces) into the current $27+ trillion stated U.S. debt, you get a gold price of $92,000 per ounce! The official deficit in 2020 fiscal was 3.1 trillion, but the real number is actually $4.2 trillion. The fact is the money has been allocated, but yet spent. In fiscal 2021 another $3+ trillion deficit is expected.

Stocks are very overvalued by any standard, but of course fundamentals and value have no meaning these days (the Curmudgeon 100% agrees).  The Nasdaq-100 index, a proxy for large tech stocks, trades at 29 times earnings estimates for 2021, versus 21 for the S&P 500.

The likely reason the S&P 500 rallied 7+% last a week was that investors believed that “if” Joe Biden becomes the next U.S. President, the tech sector will not come under monopoly/breakup threats.  That thesis is far from certain, yet the overvalued tech sector is still seen as a safe (yet super crowded) trade.

Indeed, tech has become all things to all investors.  “The bottom line is that tech has been both a bull- and bear-market play,” Jim Paulsen, chief investment strategist of the Leuthold Group, told Barron’s on Friday.  Who says you can’t have it both ways?

Opinion: The U.S. is in deep decline and wherever you look you’ll find corruption.  One can’t be too pessimistic in my view. For the reasons why, please review my October 2020 post here.

Gold’s price has continued to trade in an uptrend and investors trading gold are expected to be more active in the next several weeks.  The trading pattern is shown in this chart:

The Fed’s buying of U.S. Treasury securities with “money created out of thin air” continues to pressure the U.S. dollar.  So do the negative real interest rates across the maturity spectrum. As Gold’s price is inversely proportional to the U.S. dollar, the yellow metal is expected to continue to be supported and could accelerate to the upside this November if the dollar continues to weaken.

Good health, stay calm, good luck and till next time….