We re-iterate that readers should NOT pay much, if any, attention to financial markets until the COVID-19 pandemic stabilizes and new cases/deaths start to level off.  Doing so, with the volatility expected, will surely raise your anxiety levels.

Instead, we highly recommend participating in video meetings of your choice, reading good books, talking with friends and family, practicing meditation and deep breathing, listening to relaxing music, etc.  At least till the Shelter in Place orders are lifted.

At its recent low on Monday March 23rd, the S&P 500 had fallen much faster and by much more than any bear market in post-World War II history during its first 23 trading days. Indeed, it was off by about -34%, more than six times greater than any bear market post-1945. The intensity of volatility over the past 5 weeks has been especially noteworthy, reaching all-time highs based on many measures.

As we expected and noted in last week’s post - Curmudgeon/Sperandeo: Perspective: U.S. Economy and Stock Market Implode in Just 21 Trading Days!, there was a huge three day rally from Tuesday to Thursday, before Friday’s ~4+ % selloff in the popular averages.

Investor sentiment from AAII's weekly survey are showing bearish readings right now, despite the big rally this week.  That’s not surprising after the 23-trading day market stock market crash.  Only 32.9% of respondents reported as bullish this week, down from 34.4% last week. Bearish sentiment increased to 52.1% from 51.3%. 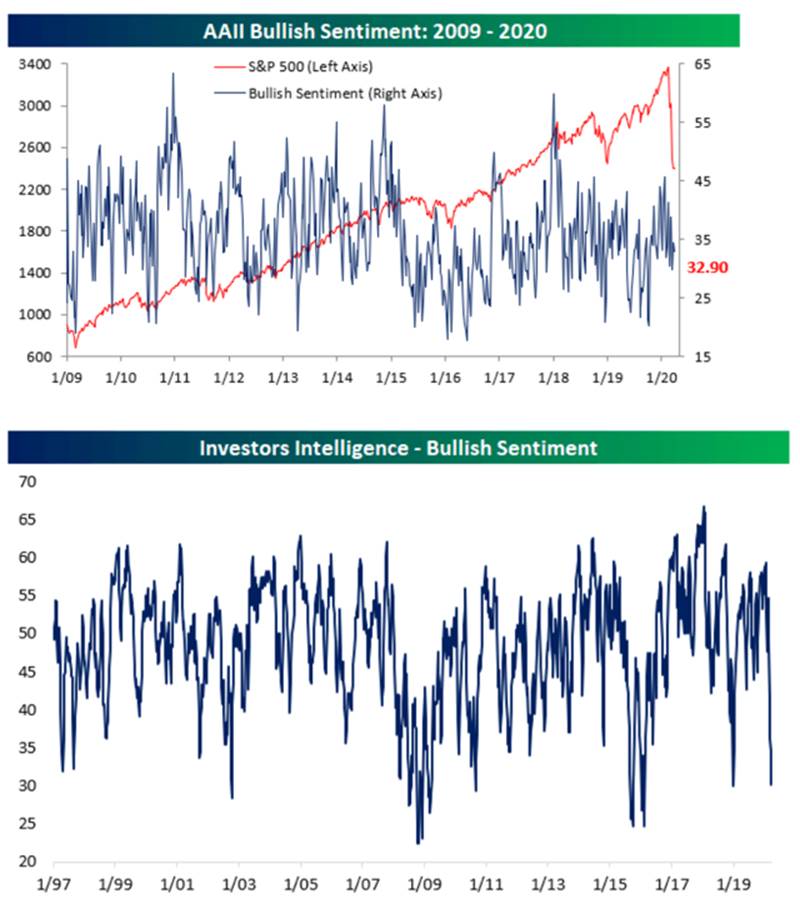 As of Saturday night March 28th, the Timer Digest top ten stock timer consensus is Bearish with 2 Bulls, 7 Bears, and 1 Neutral.  The Top Long-Term Timers are Bearish with 1 Bull, 5 Bears, and 4 Neutral. To a large extent you should ignore such “expert” market timers or even take their consensus as a contrary indicator. That is because they seem to be always wrong when you need their advice most (almost all were bullish at the top and throughout the first 3 to 4 weeks of the bear market)!

Leuthold’s Major Trend Index (MTI) ticked up this week to 0.90 which is only slightly bearish (0.95 to 1.05 is considered neutral).

The late and great Richard Russell’s Primary Trend Index (PTI) is bullish by 6 points and slightly above its 89 day moving average: 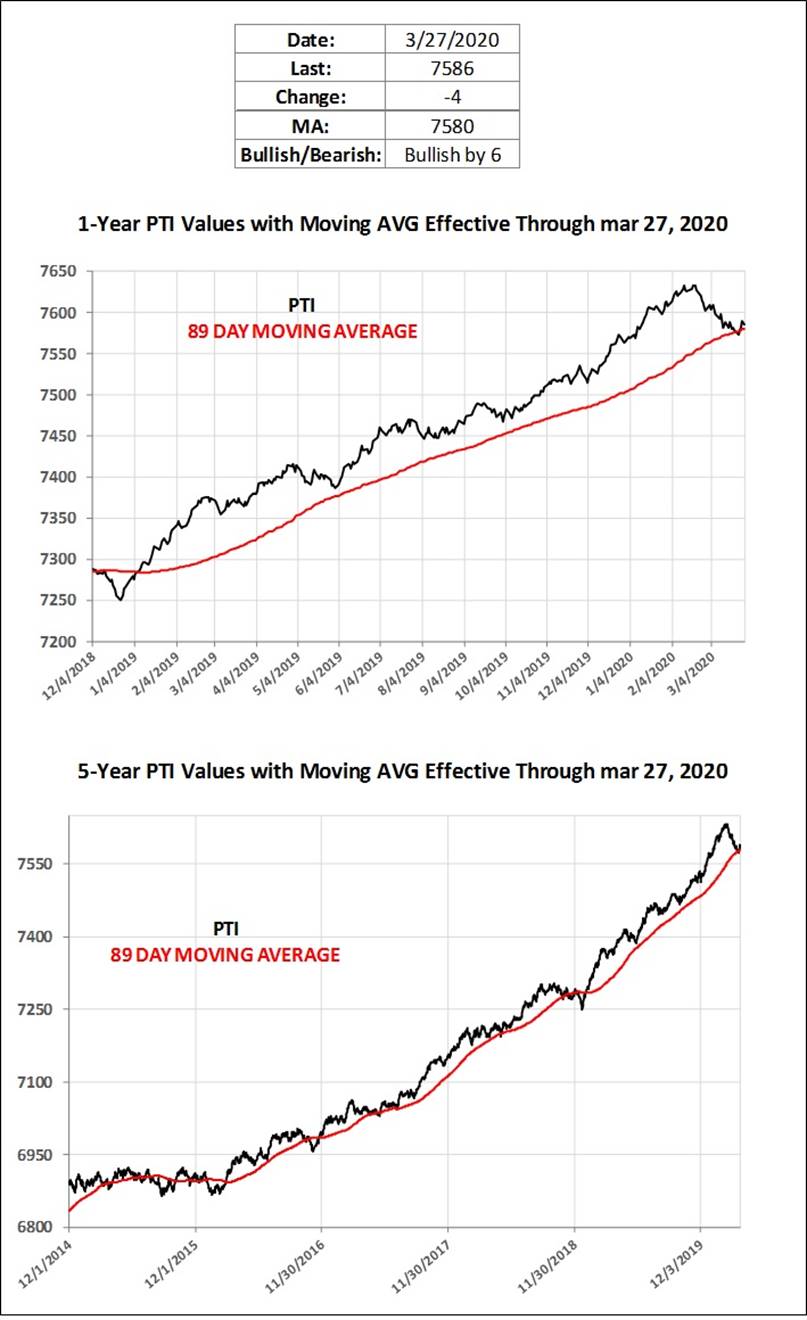 U.S. Economy will be Bad to Horrific:

Thought Thursday’s off the charts 3.3M new initial jobless claims report was bad?  It certainly surprised economists who had forecast only about 1M new claims.

Did you notice last week’s Michigan Consumer sentiment index report?  At 89.0, it dropped 11.9 Index-points in March.  That was the fourth largest one-month decline in nearly a half century [1.].  The Index of Consumer Expectations, at 79.7, decreased by a whopping 13.5% or 12.4 index points from the February 2020 reading of 92.1.

Chief Economist Richard Curtain wrote: “There is no silver bullet that could end the pandemic as suddenly as the military victory that ended the Gulf war. To avoid an extended recession, economic policies must quickly adapt to a new era that will reorder the spending and saving priorities of consumers as well as the relative roles of the public and private sectors in the U.S. economy.”

The economic numbers are going to get a whole lot worse, which is very scary if you still have a job or live off your investments.

Economists surveyed by Fortune predict a -8% to -30% drop in 2nd quarter GDP and an unemployment spike that will grab headlines for many weeks. St. Louis Fed President James Bullard said U.S. unemployment could rise to 30 percent in a few months.

-->It's going to be very, very ugly. That implies that, for no other reason (like technical analysis of historic bear market price patterns), we will see a re-test of last Monday’s stock market lows, especially if volatility persists. Please see Stock Market Outlook below for more insight and perspective.

The response of both the Federal Reserve and the U.S. federal government have been unprecedented. The Fed has stated that it’s willing to provide unlimited monetary stimulus, announcing program after program, as its balance sheet exceeds $5 trillion for the first time.

Similarly, the $2.2 trillion fiscal stimulus package passed by Congress is more than double the $800 billion package passed in 2009 to ease the Great Recession.

The Financial Times says the increase in fiscal spending and loans in the U.S. this year alone will reach more than 10% of gross domestic product (GDP).  That’s larger than the rise in the U.S. federal deficit through financial crisis years 2008 and 2009 combined.

Of course, that will lead to $4 trillion dollar deficits, but that’s “the day after tomorrow’s problem.” Or is it?  See Victor’s comments below on the exploding U.S. debt.

These efforts will likely dampen the economic fallout that has already begun to take place, but the full impact that will be realized is still largely unknown. The spike in new jobless claims to 3.3 million coupled with the sharp drop in Consumer Sentiment indicate that the ongoing economic damage will be significant for the next few months, if not longer.

Victor: When Will Debt Become an Issue?

Debt has not yet been an issue for the U.S. economy or financial markets.  Even the bond vigilantes are a thing of the past. That will all change once the national debt becomes so large that paying interest on the debt becomes a major government budget item and a burdensome percentage of projected tax revenues.

President Trump signing this so called “Stimulus Package” into law on Friday guarantees the end of the U.S. political system as we know it in 10 years (or maybe less time).  Here’s why:

The national debt is currently $23.5 trillion with an additional $1 trillion budget deficit forecast in January by the CBO for the 2020 fiscal year, which ends on September 30th. But that was BEFORE the economic toll of the coronavirus could be factored in!

With the $2.2 trillion fiscal stimulus package, $2 trillion in estimated reduced tax revenues collected, and additional unemployment insurance/social programs required to mitigate a recession, I estimate the fiscal 2020 budget deficit to be ~$4.7 trillion.

[I’m not alone in forecasting such a large U.S. budget deficit.  Ben Ritz wrote in Forbes that “America Is On Track For A $4 Trillion Deficit In 2020.”]

What will collected tax revenues be? From 2000 to the present time, U.S. tax revenue has grown at a 2.85% annual rate.  Being very generous, let’s use the current projected CBO base number of $3.632 trillion for September 30, 2020.  So, in ten years the U.S. will receive $4.819 trillion in tax revenue assuming no more recessions or tax cuts.

Perhaps, now you see that the interest on the U.S. national debt will be impossible to pay in 10 years time.

You can borrow to create debt, but any loan shark will tell you... you can’t borrow interest- to pay interest. The dollar will be cremated. The result will be HYPER-INFLATION (as John William’s has also forecast for quite some time)!

Does any of the above tell us where the stock market is going after the largest three-day rally in almost 90 years (since 1931)?

It could possibly be one to sell or sell short on rallies to hedge a portfolio in the near term.  Too early to buy, but there might be good long-term value from these levels, especially considering all the monetary and fiscal stimulus that’s now in place. That puts the market somewhere between a sucker's rally and a long term buy.

Hence, we advise investors to do little or NOTHING until volatility subsides and the COVID-19 new cases/death curves flatten.

“When an investor focuses on short-term investments, he or she is observing the variability of the portfolio, not the returns – in short, being fooled by randomness."

“The stock market is the story of cycles and of the human behavior that is responsible for overreactions in both directions.”

“Unless you can watch your stock holding decline by 50% without becoming panic-stricken, you should not be in the stock market.” Warren Buffett

“Where wealth is health, bankruptcy is death.”