Did Your Market Timing Service Get You Out at the Top?

By the Curmudgeon with the SuperBear

Due to increased anxiety caused by the Coronavirus and this week’s stock market volatility/2-day crash, we will keep this blog post short and to the point.

The sharp and scary market plunge is clearly depicted by this chart which is worth more than 1,000 words: 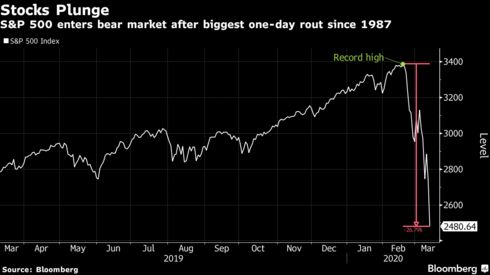 Note 1.  The Dow was down over 520 points in the last 10 minutes of trading to close at the low of the day.

After the first circuit breaker kicked in at the open after the S&P 500 fell 7%, the equity markets resumed trading shortly before 10am and stocks plummeted yet again. The Fed’s liquidity injection announcement sent shares briefly higher before tumbling once again to close at the day’s lows.

These huge stock declines today came despite the New York Fed announcing new rounds of liquidity to keep banks afloat.  The steep losses this month show that there has been little remedy provided by governments and central bankers that could calm jittery investors.

The Dow Theory triggered a bear market signal today [2.], when the Dow Industrials joined the Transportation Average by breaking below their 2018 lows as shown in this chart: 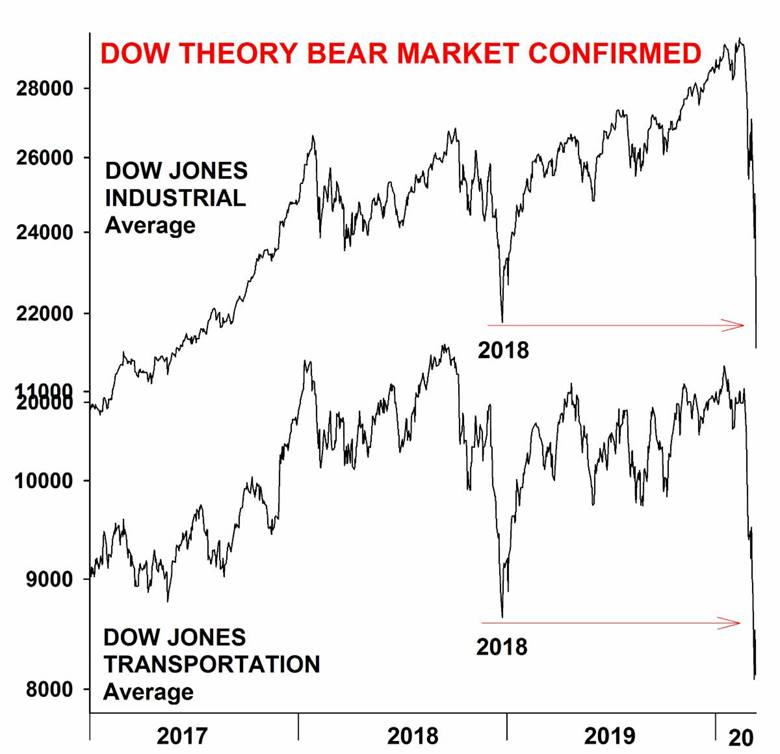 Note 2.  The Dow Theory bear signal is something Victor anticipated earlier in the week.  He sent me a detailed analysis which I can email to readers on request.

This acclaimed index, which measures the primary trend of the U.S. stock market, is now maintained by the Aden sisters who this author respects tremendously for their hard work, honesty and integrity.  As of today’s nightmare on Wall Street (March 12th) it is still (barely) bullish as per this chart: 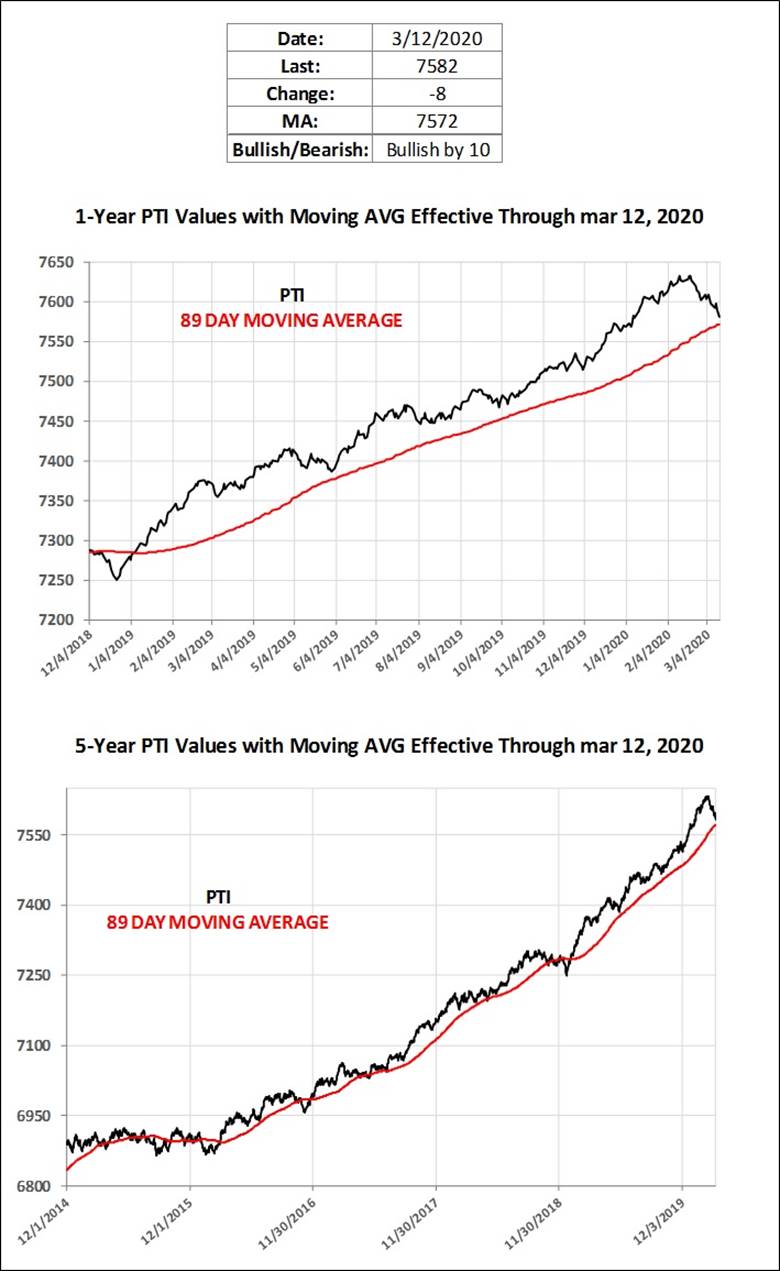 In our last post Did You Buy the Dip? How is Your Melt-Up Portfolio Doing? (03/10), we noted that all the top market timers were bullish or neutral at the February 2020 top and none were bearish.  As of Wednesday, March 11th Timer Digest evening hotline:

·       Diversified Select Program: On Thursday, the one third of the Fidelity Money Market Fund balance will be used to Buy Select Biotechnology (FBIOX).

àThe moral of this story is that you can’t trust market timing, especially in fast market conditions or when there are unexpected shocks to the global economy, like the coronavirus and oil price war.

Recommendation for Investors (not Traders):

We believe the only viable and safe hedge against stock and other asset class steep declines is cash, CDs, T-bills, or high grade bonds that you intend to hold to maturity (for my granddaughter’s Trust account I have several bonds that mature in 3 to 4 years and are highly unlikely to default, but they might be called).

The exception is when you feel a given asset class is severely overvalued and/or the outlook is very bleak.  In that case, it’s OK to reduce or even eliminate that asset class from your portfolio.  I did that for Treasury notes and T-bonds which I used to purchase all the time for clients, my family, friends and myself when I was managing money. Treasuries were eliminated because the real yield was either negative or only marginally positive (before taxes).

àObviously, I was wrong about the outlook being bleak when the 10-year T-Note was at 2%, as it is now well below 1%!  However, I have no regrets for not buying T-Notes or any long-term bond.

As a result, I’ve built up a sizeable cash/CD/T-bill position which buffers the losses I’m taking on “at risk” investments.  I also own a lot of gold coins and gold futures contracts through a managed futures fund I own which is always long gold.  Here’s what the latest Aden Forecast (subscription required and recommended) has to say about the yellow metal:

As you know, gold has traditionally been a safe haven during uncertain times. For thousands of years it’s been the safe haven of choice. And even though gold has been volatile, this time has not been an exception. That’s primarily due to the fact that gold is gold. It’s durable, it’s accepted throughout the world, and it has the longest track record for being the world’s favorite global money and wealth... dating back to 3000 BC.

During times of war, revolutions, economic chaos, political upset and devaluations, for example, gold has always emerged as #1. It has enabled people to flee from one country to another, taking their savings with them, say in the form of gold coins. Gold has also maintained its purchasing power for thousands of years.

Gold is currently in strong demand. The world’s central banks have been piling into gold because they know the global economic outlook is not good. They’re trading they’re cash and bonds for gold. And now, private investors are starting to do the same.

By all indications, this trend is going to continue in the years ahead. So you clearly want to hold onto your gold and other precious metals. If you haven’t bought yet, it’s not too late. The bull market is still in its early stages and it has a lot further to go.

The U.S. dollar and gold used to move in opposite directions, but that hasn’t been the case in recent years. Overall, however, gold is much stronger than the dollar.

“We are beyond the logical, mathematical approach to things,” said Steven Dudash, president of Chicago-based IHT Wealth Management. “We’ve got complete overreactions going on because of the fear of the unknown. When you see that, you can’t expect to see a logical response to interventions,” he added.

“Markets simply don’t know what the next steps are in terms of the virus spread,” said Edward Park, deputy chief investment officer at Brooks Macdonald. “We will see a dip in global growth in Q1 and Q2 and all the fiscal stimulus out there can’t avoid that.”

“Until there are details on the steps that leadership intends to pursue to remedy the economic effects of the viral outbreak, equity markets will be vulnerable,” said Carl Tannenbaum, chief economist at Northern Trust.

“Markets are likely to remain volatile. The fear coming off from the coronavirus is going to be something that continues over the next few weeks at least,” said Paul Sandhu, the Asia-Pacific head of multi-asset quant solutions and client advisory for BNP Paribas Asset Management in Hong Kong.

The biggest crash since 1987 causes the old bear to come out of his cave. First off, I want to give big thanks to the Curmudgeon and Victor for keeping the fires of rationality going through years of Fed induced mania. I just have a few thoughts to add.

First off this is the first time that I’ve seen the Fed fail in its mission to do whatever it takes to keep the markets rolling. A surprise rate 50 bp cut had no impact and promises of practically unlimited liquidity could not stop the markets from rolling lower. Now next week expectations are for another Fed rate cut of 75 bp or maybe even 100 bp to really try to shock and awe the markets. Even if they just go for a pedestrian 50 bp that brings the Fed Funds down to 75 bp which doesn’t leave much room for further conventional moves.

I suspect that things will get worse before they get better. I’ve been watching the spread of the coronavirus from the start when it was still contained in Asia. My concern was the ease of its transmission more than its lethality. Dead or really sick people have a hard time spreading viruses. Now we’ve come to the point where institutions and businesses are shutting down. I’m not sure anyone can estimate how big of an impact this will have going forward. Cases in the US are still listed as under 2,000 but when more tests become available that number is likely to increase tremendously. The rest of this month and April could see a pandemic worse than any other in living memory. I can’t imagine this wouldn’t be a total disaster for an economy built on debt and leverage.

As the Curmudgeon mentioned above folks are still not all that worried. I’ve seen client notes comparing the current crash to previous crashes and stressing that the market have always recovered. That has certainly been the pattern for the past 30 years, but it is possible that will no longer be the case. Maybe the Fed can pull another rabbit out of its liquidity hat and keep the game going a bit longer. There is always a chance since they are willing to try anything that is ruinous in the long run if it can kick the can a little further down the road. However, if the Fed’s multi-decade financial experiment is coming to an end, we may see a bear market that will rival the great bear markets of the past (1929-1942; 1966-1982)