Did You Buy the Dip? How is Your Melt-Up Portfolio Doing?

No, we didn’t buy the dip and we never believed in a melt-up portfolio, despite huge advertisements and promotions for same.

Victor has warned for a very long time that the equity markets would just “top” without any prior technical deterioration or warnings.  Indeed, the top market timers were ALL bullish or neutral at the end of February when the sharp decline started in earnest.  NONE were bearish!

Furthermore, Victor said that a severe correction or bear market would start with an event(s) the Fed could not control.  Obviously, the coronavirus is such an event.  Note that the Fed’s 50 bps emergency rate cut last week did not stop the panic selling, which hit critical mass today (Monday, March 9th).

An oil price war between Saudi Arabia and Russia is another event which the Fed can do nothing to mitigate.

After reviewing today’s market sell-off we analyze and provide perspective on oil, credit markets, and what might happen next.

Stock markets around the world were a sea of red ink today. The S&P 500 index fell by 7.6%. The UK FTSE 100—laden with oil firms, such as Shell and BP, and other natural-resource companies—suffered a similar drop.  France’s CAC 40 was down by 8.4% as were other European bourses.  Here’s a world stock market map you can check for daily performance.

Investors rushed for the safety of government bonds. The yield on the 10-year U.S. Treasury note closed below 0.5% for the first time ever.

While there’s growing anxiety about a global recession as covid-19 spreads, the trigger for today’s panic stock selling was a collapse in the oil price, following a meeting of OPEC ministers and other oil producers on March 6th.  Russia, which is not an OPEC member, refused to cut production to stabilize the crude oil price.  The response from Saudi Arabia, OPEC’s largest producer, was to start an oil price war.  The oil kingdom offered discounts to its customers and announced an increase in its output starting next month. 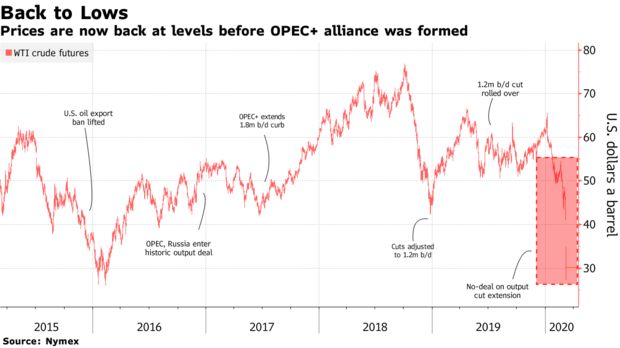 Thanks to the shale oil boom, the U.S. is once again a big producer of oil, so our economy suffers (as well as gains from cheaper energy) when oil prices fall.  Listed oil companies in the U.S. and Europe will endure a direct hit to profits if the oil price stays where it is. Much of the red ink on March 9th was from listed oil stocks.

An immediate effect of lower oil prices was a further tightening of corporate-credit conditions for the riskiest borrowers. A boat load of investment-grade issuers—hoteliers and carmakers as well as airlines and oil firms—may also be at risk.  Many have seen their bonds downgraded to “junk” status (rated 'BB' or lower by Standard & Poor's and 'Ba' or lower by Moody's).

àThe more stressed markets become, the more credit will be withheld from those companies most desperate for cash to tide them over.

Another worry is that offshore borrowers of U.S. dollars may find it hard to secure funding in the future. Japanese banks and insurance companies have been voracious buyers of bonds in the U.S. and Europe. Were they to back away, credit markets would come under further strain.

The Fed Responds (yet again):

Today (March 9th), the New York Federal Reserve has boosted its overnight repo operations from $100bn to $150bn. That means there's an extra $50bn on offer to U.S. banks, who might be worried about lending to rivals in the current climate.

The two-week Fed repo operations on March 10th and 12th will also increase to $45bn from the current $20bn mark.

Big financial institutions fund much of their operations by borrowing money over very short time periods. But if these short-term money markets dry up – as they did in 2007-8 when Bear Stearns and then Lehman went bankrupt – it can put Wall Street firms under extreme pressure (aka a liquidity crisis).

What’s Next for Oil and Stock Markets?

Goldman Sachs expects oil could fall as low as the mid-$20s, which is the cash cost of production for some U.S. and Canadian producers. Given that those companies are the swing producers in the market, those levels would cause production cuts that would be likely to bring the market back into balance.

Analysts say Chinese demand fell by at least 4 million barrels at the height of its virus-related shutdown, and that demand isn’t fully back yet. Now other countries are severely cutting business production amid quarantines, which will likely remove even more demand from the market. In that environment, a price war becomes even more risky. And there’s no initial reason to think “cooler heads will prevail.”

“While OPEC leadership retains hope that the price collapse will be a catalyst for a reconciliation between the two oil heavyweights, Russia President Putin may not quickly capitulate,” wrote RBC Capital Markets strategist Helima Croft. “We fear that it could be a protected struggle, as Russia’s strategy seems to be targeting not simply US shale companies— but the coercive sanctions policy that American energy abundance has enabled.”

For stock markets to stabilize, several things are required:

1.     Clear evidence that virus infection rates in rich economies are peaking or even being reduced.  NO MORE EVENT CANCELLATIONS!

2.    Oil prices must stabilize and build a base such that confidence is restored.

3.    The price of risky financial assets, such as stocks and high yield corporate bonds, must become cheap enough to attract bottom-fishing investors.  We are a long way from fair valuations so don’t try to buy the dip or “catch a falling knife.”

“I never buy at the bottom and I always sell too soon.” – Baron Rothschild