Whatever Happened to the Inflation Premium on 30-year U.S. Treasury Bonds?

Combining those two data points and you get a negative real yield of -0.46% (-46 bps) on the 30-year T-bond, based on Friday’s close.  To the best of my knowledge that has never happened before, yet no journalist has called attention to it.

Ever since 25 or 30-year T-bonds were auctioned, there was an inflation premium [2.] of three to five percent (depending on the direction of inflation and bond market volatility) built into the nominal yield.

Note 2.  The inflation premium can be estimated as the difference between the Treasury bond yield MINUS the yield of Treasury inflation-protected securities (TIPS) of the same maturity.  Inflation Premium = YieldTB – YieldIP

If we already have a nominal rate and a real rate, we can isolate inflation risk premium using the following equation:

Now it seems the demand for U.S. long bonds is so voracious that buyers don’t mind losing purchasing power by holding a long T-bond for 30 years.  Alternatively, the bond market may be forecasting zero inflation (or deflation) for the next 30 years. Or T-bond traders are expecting even lower yields so they can sell bonds purchased today at a profit tomorrow?

“I expect the Treasury 10-year yield to fall to zero, perhaps within two years,” said Akira Takei, a global fixed-income fund manager at Asset Management One Co., which oversees more than $450 billion. “I’ve been overweight U.S. Treasuries. That’s based on my view that developed economies are facing a combination of aging demographics and falling birth rates, slow growth and low inflation.”

Where is the Demand for Long T-Bonds Coming From?

·       Pension funds have been ramping up bond allocations for more than a decade after a change in regulations.  They now hold a record amount of longer-dated Treasuries.

·       Bond mutual funds saw a historic inflow of money last year, with no sign of a slowdown. In the week ending February 12th, Taxable Bond Fund Inflows were $11.7 Billion.

·       Banks are buying record amounts of Treasuries [3.] as they scale back their lending.  For example…..

·       The Financial Times reported in November that JP Morgan Chase had bought more than $130 billion of long-dated bonds and cut the amount of loans it holds, marking a major shift in how the largest U.S. bank by assets manages its enormous balance sheet.  The twin moves, which have seen the bank’s bond portfolio increase by 50 per cent, are prompted by capital rules that treat loans as riskier than bonds. JP Morgan’s new approach comes down to an economic decision: they can make more money selling [loans] than buying them.  “It’s incredible,” said an executive at a large institutional investor. “The scale of what JPMorgan is doing is mind-boggling . . . migrating out of cash into securities while loans are flat to down.”

In other words, heavily skewed regulations have gifted banks the proverbial money machine. And by cranking that machine, the banking sector has become a gigantic and somewhat price-insensitive government bond buyer, one on which the Treasury Department can depend even as debt spirals higher.

Victor had first noted these new rules for banks in this article, which was subsequently republished at Zero Hedge.  This is the part I liked best:

The really interesting part is skirting around mark-to-market accounting. Since the banking crisis, banks have been permitted to hold assets in a special account called an HTM (held to maturity) account.  Government debt held in this account is not marked to the market.

So even if interest rates rise and the prices of the bonds fall, the bank reports no decline in the value of the debt, which means no negative effect on quarterly earnings. But it still gets to collect the interest.

·       While the Fed continues to buy T-bills at a rapid clip (see last week’s post: Curmudgeon: Fed T-Bill Buying Persists Despite Ultra Easy Financial Conditions), it is not buying long term Treasuries at this time.

·       China has steadily accumulated U.S. Treasury securities over the last few decades. As of May 2019, China owned $1.11 trillion, or about 5%, of the $22 trillion U.S. national debt, which is more than any other foreign country.

With U.S. long term treasuries at or near all-time lows, buyers are still buyers ready to pounce and buy every dip (see chart below).  Even surging stocks, record auction sizes and the tightest labor market since the 1960s can barely make a dent in bond prices. 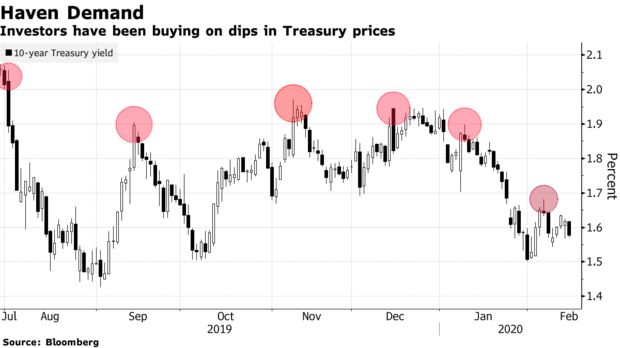 Investors’ apparently hunger for ANY positive nominal yield in a global market with nearly $14 trillion of negative-yielding debt. It could also be a sign that some investors are hesitant to take on additional risk until they know more about the potential spread of coronavirus.

“The demand for (Thursday’s 30-year T-Bond) auction was amazing considering the low coupon,” Simons and McCarthy wrote in a Thursday note. “However, yield is hard to find around the world.”

The appetite for debt has extended to sovereign obligations of all flavors. One example: Greek 10-year rates once near 45% slid below 1% this month. The country’s junk rating is proving little deterrent with the world’s pile of negative-yield debt climbing above $13 trillion amid the latest global bond rally.

“Low yields may well be a sign that bond markets are correctly priced for the likely risks posed by the virus outbreak,” wrote Gaurav Saroliya, director of macro strategy with Oxford Economics.