S&P 500 Forecasts Bullish but Prices Bolstered by Buybacks and ETFs, Not Earnings

2020 stock market forecasts issued by the big investment banks and brokerage houses are out and, as expected, they are mostly bullish.  Only four of 14 firms forecast a negative return for the S&P 500 next year as shown in the following table: 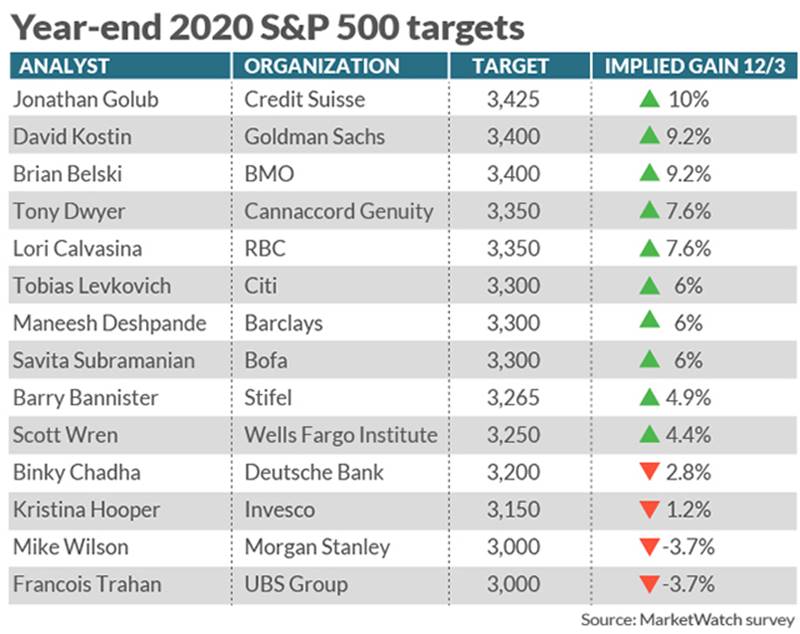 We caution readers not to put too much faith in these forecasts. Why?  Because they have a dismal track record.  The main reason is that stock market forecasts are typically based on earnings growth for the coming year.  In fact, CFA Institute (and other) students are taught that earnings are the number one driver of stock prices.  Based on 2019 stock market performance, that no longer seems to be true.

In this new era of never-ending financial bull markets, we wonder if the stock market even cares about earnings anymore.  That’s in light of S&P 500 3Q-2019 YoY earnings decline of -2.3% with the index +24% YTD.

Let’s look at P/E ratio, which has become greatly distorted by share buybacks which reduce the number of outstanding shares of stock. The S&P 500 is currently at a relatively high 23x earnings (without buybacks it would be much higher). Historically, investors have been willing to pay anywhere between 5x and 40x earnings for the U.S. market. That valuation swing translates in anything from a 70% gain in stocks to a 70% decline.  With interest rates so low and monetary policy so easy, it is highly unlikely that the P/E ratio will decline to single digits, which makes a major stock market decline unlikely in 2020- an election year in the U.S.

However, we have been in an earnings recession for quite some time as documented in previous Curmudgeon posts and elsewhere, like this piece from Morgan Stanley Wealth Management: 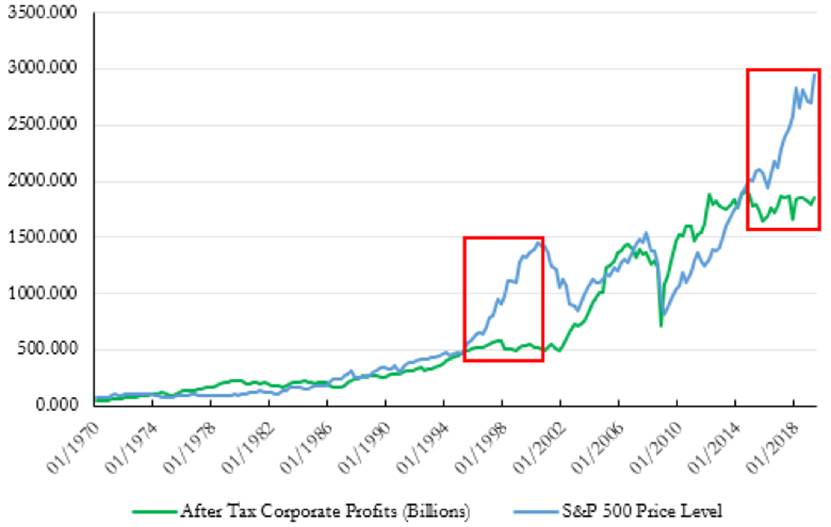 The red box on the right shows that S&P 500 after tax profits (not EPS which is distorted by buybacks) peaked five years ago in 2014 and have been basically flat since then. JULEX Capital reflected on this dichotomy in a December 6th blog post:

Although the stock market continues reaching record highs, companies are making less than they did five years ago, so this performance is largely driven by P/E expansion.

There is good reason to believe that the current environment represents a fundamental mispricing in the stock market. For instance, applying a linear model to the most recently available earnings data would yield a predicted S&P 500 price level of below 2566 with 97.5% probability, quite the far cry from the current levels of over 3100.

A large part of this P/E expansion can be attributed to aggressive corporate buybacks. According to Goldman Sachs’ Research Team, only corporations and households have been net buyers of equities since 2015, with buybacks accounting for a large majority of the demand (see chart below). If the market loses this key piece of support going forward, either through government regulation or from natural causes (e.g. difficult to do buybacks without a significant increase in after tax earnings), then one would expect equities to come back down to more reasonable valuations.  But don’t bet on it! 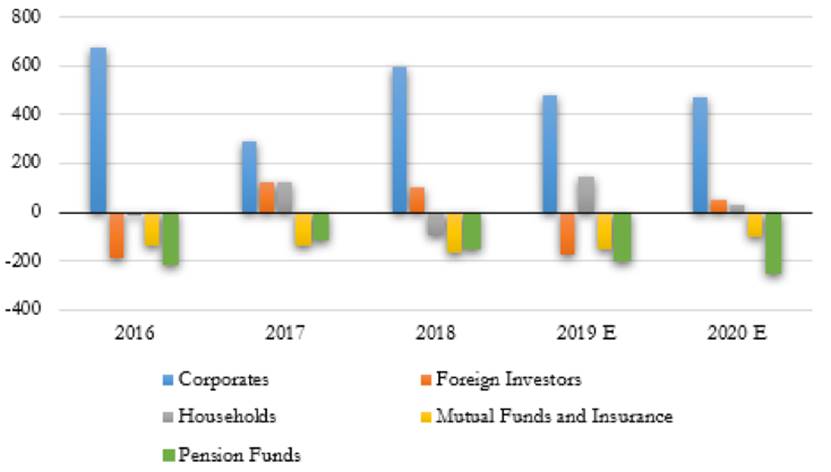 Morgan Stanley’s Michael Wilson is one of the more bearish analysts on Wall Street. “Easier monetary policy and trade stabilization will help global growth accelerate, but only stabilize GDP growth in the US at 1.8%, leaving pressure on corporate margins from tight labor markets,” he wrote in a note to clients.

Wilson argued that central bank stimulus may keep stock prices elevated in the near term, “but by April, the liquidity tailwind will fade and the market will focus more on fundamentals, where uncertainty is higher than normal.”

He believes that profit margin headwinds and sluggish U.S. economic growth will keep earnings gains nearly non-existent, as has been the case in 2019, while international trade and policy uncertainty will keep a lid on equity valuations.

UBS’ Francois Trahan also has a target of 3,000 on the S&P 500 for the coming year, driven by what he predicts will be an earnings recession — or two or more consecutive quarters of declines in S&P 500 earnings.

“Directly in front of us, we see S&P 500 forward earnings falling and expect them to remain under pressure for several quarters,” Trahan wrote in a recent 2020 outlook note. He said that earnings declines in small cap stocks are presaging what will happen to large caps as a slowing of economic growth, which began in 2019, continues next year.

Tim Quast on ETFs Influence on the Market:

Our long-time colleague Tim Quast, principal of ModernIR [1.] has several cogent comments on how ETFs are artificially propping up stock prices.

Note 1.  ModernIR is the No.1 Market Structure Analytics™ firm in the Investor Relations (IR) profession, serving a rapidly growing client base in excess of $1.5 trillion in market capitalization.

ETFs are fostering inflation in stocks precisely the same way issuing excess currency beyond the market’s requirements diminishes purchasing power.  ETF shares continue to expand at an eye-popping pace even as investors exit U.S. equities via net redemptions (the WSJ said over the weekend that investors have pulled a net $135 billion this year from equity mutual funds).

How is it possible to create more ETF shares as money leaves U.S. equities?  Very easy:  Create them WITHOUT accumulating the underlying stocks (academics refer to this as “operational shorting,” Professor Rich Evans from UVA in Charlottesville VA wrote a paper on it, and I moderated a panel with him in June this year to discuss it).  Selling ETF shares that have no associated underlying collateral inflates prices, because arbitragers trade the ETF shares up in line with the benchmarks they track – which in turn pulls stock prices up too.

We track the ETF data from the Investment Company Institute every month.  There’ve been $3.2 TRILLION of ETF creations and redemptions this year, with creations outstripping redemptions by $224 billion (monthly average of $325 billion total create/redemptions per month in 2019 through October, the most recent data available).   From ICI’s November 26th report: 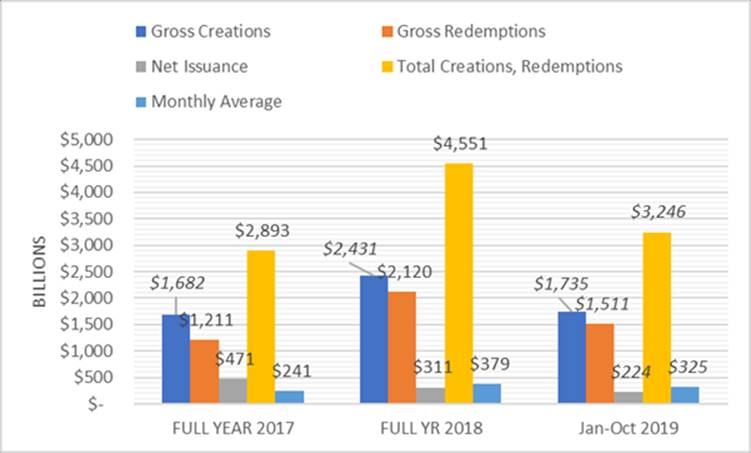 “Just because something isn't a lie does not mean that it isn't deceptive. A liar knows that he is a liar, but one who speaks mere portions of truth in order to deceive is a craftsman of destruction.”

àThe Fed does not understand this!