Why Gold Is More Than a “Pet Rock”

by Victor Sperandeo with the Curmudgeon

The purpose of this critical review is not to promote gold, but rather to portray the bias, misleading, and misrepresented facts that have unfortunately become an epidemic in the press over the last 10 years. The distorted reporting by Jason Zweig, a well-known reporter for the esteemed Wall Street Journal, shows that "honest reporting" is a dinosaur (except for the Curmudgeon blog posts!).

First, Mr. Zweig made a bearish call on Gold one year ago (July 17, 2015) in a WSJ article and blog post. As gold has rallied strongly this year, Zweig now referred to himself as a "moron."  I respect him for that, as human beings are not infallible and making a mistake is normal.

Yet Zweig again compared gold to a "pet rock!" For this I will use the terms dumb and unintelligent for him.

If you go to a park with hills you will find many rocks, but no gold.  One would need to discover gold, recover a sample and spend a great deal of money on geologists doing so.  To mine the gold one has to hire miners, trucks, workers, assayers, buy machinery, get licenses from government bureaucrats, and incur many other costs and risks.

-->To suggest all that effort is a similar "value proposition" to picking up a rock is totally absurd!

First and foremost, “Gold is money; Everything else is just credit," said JP Morgan. 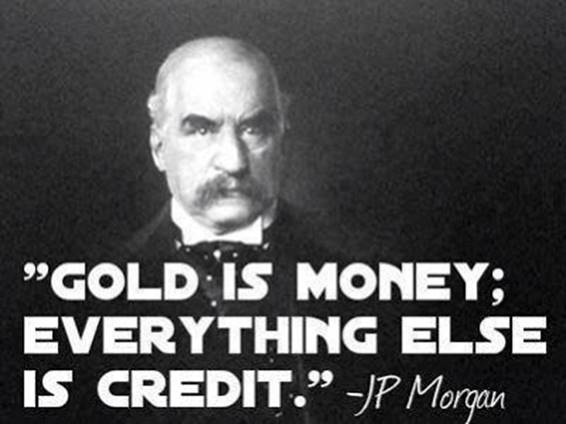 Gold has been valued for approximately 6,000 years.  Gold treasures have been found dating back to as early as 4000 BCE in a burial site in Varna, Bulgaria (from the ancient Thracian civilization).

Let's now examine some of Zweig's statements about gold (with my assessment in parenthesis):

·       "While gold is a reliable store of value over extremely long periods, most investors don't lock up their money for a couple thousand years at a time. (More than true).

·       "In the shorter term, gold fluctuates so wildly that it is a surprisingly poor hedge against increases in the cost of living." (Sometimes true).

·       "From its peak of more than $800, as inflation raged in 1980 gold fell relentlessly over the next two decades even as the cost of living continued to rise."(Not True! The misrepresentation of this statement is a biased fabrication).

Gold acted true to form as GDP increased and inflation fell from 1982-1999. Inflation always increases (without a gold standard) at some amount, over a two-year period, but it is the "slope or trend" of the increase that counts, not the nominal amount.

Zweig further claims that “Adjusted for inflation gold remains 35% below the 1980 peak." Thereby, a two-day event in 1980 is what Zweig sets as a standard to create the misrepresentation that gold is not doing its supposed job as a hedge against inflation and geopolitical chaos?

-->To use gold's artificial 1980 high (based on a surprise Russian invasion of Afghanistan) along with misleading facts and context is not a service to Zweig's readers!

Let's attempt to objectively examine gold to see if Zweig is biased or dumb.  The way to fairly view the inflation rate versus a gold is to set a standard of using the "average price" for the year, which was $615 in 1980.

Zweig goes on to say "Gold is a partial, not a perfect, hedge against chaos."  Really? What a profound discovery!  Further, he explains this non-perfect hedge in action using 2008 as an example year:

-->It should be noted that gold will be sold along with most assets in a deflationary panic.

"The future always can be different from the past. But if gold shoots far up from here, it won't be following the precedents of the past. It will be violating them. So am I a moron? On many things, yes. On gold, I don't think so."

→Sadly, Mr. Zweig you are!  [The Curmudgeon agrees with Victor].

He makes the incredible claim that if gold goes up with millions of investors, traders, money managers and many governments involved in buying it, they are wrong, and he is right?  That's megalomania taken to a whole new level!

As Karl Popper (a favorite philosopher of George Soros) once said:  "Denying realism amounts to megalomania."

In 54 years of watching financial markets, I have never seen such a mania in global government bonds (especially the $10T in negative yields, BoJ buying perpetual JGBs, and 30 year US T bond yielding < ½ of its pre-financial crisis all time low yields).

The bubble trouble is almost as bad in US stocks (i.e. Dow, S&P 500, Russell 2000) when compared to their recent earnings and subdued growth prospects.  The recent market melt-up comes after a 7+ year old bull market with five consecutive year over year down quarters in corporate earnings.

But earnings don't matter anymore with central banks determining stock prices…or history been repealed because this time it's different?

“The first breadth thrust1 reached a reading of 2.2, which is significant as there have only been six readings of 2.2 or greater in the current bull market, all occurring in 2009 after the market low.”

Note 1.  The late Martin Zweig developed this momentum indicator that illustrates a thrust when, during a 10-day period, the average number of issues that are advancing goes from below 40% to above 61.5%.

“On July 8th, two days before the breadth thrust was registered, a volume thrust was recorded, with upside volume (volume in stocks closing higher on the day) exceeding downside volume (volume in stocks closing lower on the day) by a ratio of 19:1. In itself this is a bullish signal, as such one-sided volume is often seen at the start of new bull market legs.”

“The combination of a breadth and a volume thrust of these magnitudes in the same week has only occurred twice since 1950 –in 1982 and 2009– both at the start of long-lived bull markets.”

-->Does that imply this very old bull has many years left?

Rather than provide my own assessment of that, I leave the reader with quotes from others who are well paid for their market opinions:

1.  Credit Suisse’s Lori Calvasina is warning clients that the S&P 500 has hit a “post tech bubble peak” on a next 12 months P/E basis:

“Given the rally in US equities seen so far in July, we have refreshed our various valuations models for the July 13th close,” Calvasina noted. “The most dramatic change is that our S&P 500 model is back in worrisome territory, at 1.57 standard deviations above its +30-year average.”

This is troublesome, Calvasina notes, because history is not on the side of the longs.  “The S&P 500 has been down 58% of the time on a 12-month forward basis from these levels, and in our opinion, expensive valuations will continue to keep US equities vulnerable to bad news in the back half of the year,” she said.

2.  Bill Strazzullo, chief market strategist at Bell Curve Trading, told the AP that he thinks the recent stock market gains have more to do with easy money policies by central banks in the US, Europe and Japan than any improvement in fundamentals.

"The market isn't really trading on economic growth and earnings. It's being propped up by wildly accommodative monetary policy.  The music will eventually stop and stock markets around the world will fall significantly."

3.  Alan Newman in an email to Crosscurrent subscribers wrote:

“Huge on balance volume divergences continue to show a considerable contraction in the market's internal dynamics.  Also of note, the non-confirmation of the Dow Transports, 14.2% below their November 2014 peak.  Wow.  Stunning.   The weekly advance/decline numbers are far more reliable that the dailies and as you can see, despite the huge run for the roses, there is still a significant divergence.  We are now leaning to the view that this divergence is as significant as at the peak in 2007.”

Good luck and till next time...

Copyright © 2016 by the Curmudgeon and Marc Sexton. All rights reserved.