To look at the histrionic vote for Speaker of the House one would think it was an extended Saturday Night Live TV show.  As spectacles go, you’d have to look back more than 160 years to find a comparable failure to elect a speaker. This week, Republicans referred to one another as the “Taliban” and “terrorists” and “hostage takers.” They traded obscenities in a caucus meeting. There was a heated exchange of words, finger pointing and a confrontation between GOP party leader Kevin McCarthy Rep-CA and Representative Matt Gaetz Rep-FL.

It took 15 ballots (the most since 1855) for Mr. McCarthy to finally make enough “deals and concessions” to get the Republican party members to vote for him OR not against him by voting present (which reduced the majority needed for McCarthy to be elected Speaker of the House).

Among the concessions, McCarthy agreed to allow any member of the House to force a vote at will to “vacate” his speaker role — essentially agreeing to be in permanent jeopardy of losing his job. He agreed to put rebels on the Rules Committee, giving them sway over what gets a vote on the House floor, and in key committee leadership posts. He agreed to unlimited amendments to spending bills, inviting two years of mayhem. He agreed to other changes that make future government shutdowns and a default on the national debt more likely, if not probable.

Here is a list of seven concessions compiled by the respected Epoch Times reporter Roger L. Simon via U.S. Rep. Andrew Ogles (R-Tenn).  There are likely a whole lot more backroom deals and concessions that we don’t know about yet. We will find out next week when the House votes on the new rules.

-->Looks like the GOP Conservative Caucus won the battle for control of the House with those deals and concessions!

Speaker McCarthy is a “Neo-Con” who favors war.  He gets legal bribes (aka donations) from defense contractors who are flush with new money after President Biden signed the National Defense Authorization Act into law on Dec. 23, 2022, approving the 2023 defense budget allocating $816.7 billion to the Department of Defense. You may take note that all the “defense contractor” stocks are at or near all-time highs, despite the ongoing bear market in U.S. equities.

McCarthy has been called a RINO (Republican in Name Only and part of the “Swamp” (a political hive) in Washington DC.

Side Comment: Senate Minority leader Mitch McConnell (REP-Kentucky) is way ahead of Kevin McCarthy as the leader of GOP phonies in this area calling themselves “Republicans.” Dick Morris, who advised Bill Clinton as chief Strategist, called McConnell “The Poison in the GOP” in a recent blog post.

Please refer to our companion piece which suggests that much of the dysfunctional U.S. government is due to political corruption.

What is meant by a Dysfunctional Congress?

Congress becomes dysfunctional when it malfunctions such that it can’t agree on any legislation and effectively becomes paralyzed.  The unbridled chaos of this week’s House speaker debacle confirmed and compounded an unsettling truth: The United States could be on the cusp of its most dysfunctional Congress ever.

With a narrowly divided chamber, 222-to-212, the new speaker has shown the far-right wing of his GOP caucus that they can get their way through obstruction — a recipe for nonstop hostage-taking by small factions going forward.

Let’s look at McCarthy’s highest-profile concession: to allow any one member — down from his previous compromise of five — to force a House-wide no-confidence vote in the speaker at any time (which is known as “a motion to vacate”).  The real issue here is that the current, 10-seat Republican majority is so small — and McCarthy’s speaker victory so slim — that the threat of defection is likely to loom over every bill, giving the same rebels who have paralyzed Congress this week endless opportunities to do the same thing again and again.

“He’s going to be the weakest speaker,” Rep. Ruben Gallego, D-Ariz., said of McCarthy. “The problem is that he’s also weakened the institution in general."

Raising the U.S. Debt Ceiling Will be Contentious:

A marquee federal-debt-ceiling showdown might be the most explosive confrontation of 2023. Economists, Wall Street analysts and political observers are warning that the concessions McCarthy made to fiscal conservatives could make it very difficult for him to muster the votes to raise the debt limit — or even put such a measure to a vote. That could prevent Congress from doing the basic tasks of keeping the government open, paying the country’s bills, and avoiding default on America’s trillions of dollars in debt.

The U.S. budget deficit is projected to average in excess of $1 trillion a year for the next decade. Those deficits will add to a national debt that topped $31 trillion last year.

Congress must periodically pass laws to raise the borrowing (or national debt) limit to avoid a situation in which the government is unable to pay all of its bills, jeopardizing payments including military salaries, Social Security benefits and debts to holders of government bonds.

Legislation passed in December 2021 raised the debt limit by $2.5 trillion to stave off the threat of default until 2023. Unless it is raised again, the statutory cap is expected to be reached at some point this year.  Goldman Sachs researchers estimate Congress will likely need to raise the debt limit sometime around August to stave off such a scenario.

Lifting the debt limit does not authorize any new spending. It simply allows the United States to finance existing obligations. If that cap is not lifted, the government would be unable to pay all of its bills, which include salaries for military members and Social Security payments.

The next round of debt-limit brinkmanship could be the most fraught on record — as evidenced by the battle over the speakership. Conservative Republicans have already made clear that they would not pass a debt-limit increase without significant spending curbs, likely including cuts to both spending on the military and on domestic issues not related to national defense.

Administration officials have given no indication that they would negotiate with Republicans over a debt-limit increase at all — nor that they were preparing to act unilaterally to bypass the debt ceiling, as some progressives have pushed for, in the event of a House speaker refusing to put a debt-limit increase to a vote without steep spending cuts.  So, there’s a serious threat of a debt ceiling stalemate leading to a U.S. government shutdown sometime this summer!

Other Spending Bills to be Adversely Impacted:

More is at stake than just the debt ceiling bill. Any spending bill could also now become a platform for hard-right brinkmanship under a return to so-called open rules, another one of McCarthy’s reported concessions to conservatives, who say they’re frustrated by large catchall measures, such as Congress’s recent $1.7 trillion omnibus package.

This move would allow any member to force votes on an unlimited number of amendments designed to eviscerate or derail the legislation altogether.

“If everything we’re seeing is a symptom of a totally splintered House Republican conference that is going to be unable to come together with 218 votes on virtually any issue, it tells you that the odds of getting to the 11th hour or the last minute or whatever are very high,” Alec Phillips, the chief political economist for Goldman Sachs Research, said in an interview Friday with the NY Times. 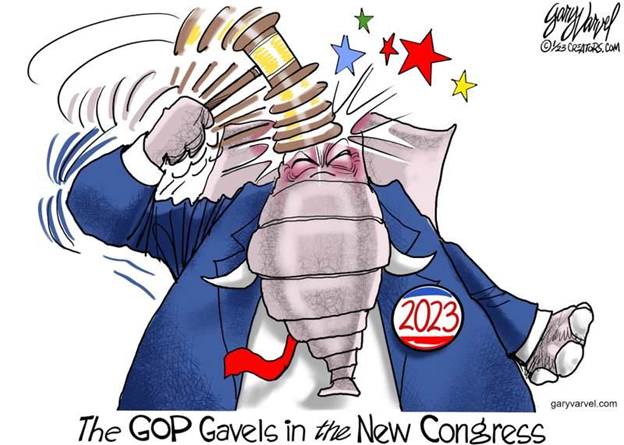 ·        By making concessions to far-right representatives, Mr. McCarthy has effectively agreed to give them carte blanche to disrupt the workings of the House — and to hold him hostage to their demands.

·        Fears on Debt Limit: An emboldened conservative flank and the concessions made to win far-right votes could lead to a protracted standoff on the critical fiscal issue that could cause economic pain.

·        The tumultuous, emotional climate that prevailed in the House last week will make it difficult for GOP to agree on any legislation, especially relating to the U.S. economy.

“This is what happens when a political party, year after year, systematically destroys the norms and institutions of democracy. This is what happens when those expert at tearing things down are put in charge of governing. The dysfunction has been building over years of government shutdowns, debt-default showdowns and other fabricated crises, and now anti-government Republicans used their new majority to bring the House itself to a halt.” by Dana Milbank, Washington Post.