Geopolitical tensions dominated 2022.  Contrary to popular belief, they were far more important than what the Fed’s ultra-hawkish monetary policy did to crash markets and may yet do to weaken the U.S. and global economy.

Escalation of Russia’s war in Ukraine, Iran’s role in supplying drones to Russia, and the real threat of China invading Taiwan could collectively cause unprecedented world-wide havoc with severe disruptions of supply chains.  If unchecked by peace talks, these threats could lead to the potential end of civilization and life as we know it!

Several experts and respected world news sources weigh in with their take on these and other geopolitical hot spots they are watching closely in 2023.

An escalation by Russia could take the form of further large-scale attacks on civilian infrastructure or restrictions on export capacity through military constraints on the use of Black Sea shipping routes. More significantly, it may take the form of using prohibited nuclear, biological, or chemical weapons to defend what it sees as Russian territory, preemptively striking arms shipments to Ukraine by members of NATO, or drawing others into the conflict with either an intentional or unintentional strikes on neighboring countries.

“The main socioeconomic trend I will be following in 2023 is geopolitics. Russia’s invasion of Ukraine in February 2022 came after its clear negative trend in social mood. China too, has been experiencing a negative trend in social mood since then and so, with the territorial issue of Taiwan increasingly in the spotlight as well as other regional tensions, the probability of negative social actions is growing by the month.

European politics is also on my radar. In 2022, Italy elected its first far-right government since Mussolini and is now led by the country’s first female prime minister. Both are manifestations of the country’s 22-year negative trend in social mood. Without the full fiscal union that only a positive mood trend will bring, the European project will continue to come under pressure. As for the dis-United Kingdom, Scotland has promised to hold another vote on independence, perhaps in 2023, as the fallout from the Brexit vote in 2016 (a result of a 16-year negative mood trend) continues to ripple through society.”

"In my view, a movement towards negotiations on peace needs to begin in the next two months or so. The outcome of the war should be outlined by them before it creates upheavals and tensions that will be even harder to overcome, particularly between the eventual relationship of Russia towards Europe and of Ukraine towards Europe," Kissinger said at the World Economic Forum in Davos, Switzerland.

"Ideally, the dividing line should return to the status quo ante. I believe pursuing the war beyond that point could turn it into a war not about the freedom of Ukraine, which has been undertaken with great cohesion by NATO, but into a war against Russia itself, and so this seems to me to be the dividing line, that it is just impossible to define... It will be difficult."

European Economy Hits Skids due to War in Ukraine:

The European Union (EU) continued its economic slowdown in the third quarter. High inflation, an energy crisis, a global slowdown, and tighter financing conditions were drags on EU growth. The war in Ukraine continues to take its toll on regional economies. High prices depressed consumer and business confidence and hampered energy-intensive industries. Emergency fiscal measures have offset some of the effects but at the cost of higher debt.

Tensions in the European energy market continue to loom large, with Russia suspending natural gas flows through the Nord Stream gas pipeline indefinitely and the European import ban and G7 price cap on Russian oil recently implemented. But adequate reserves, conservation of gas use, new Liquid Natural Gas (LNG) contracts, and a very mild start to Europe's winter weather have reduced the risk of an energy crisis in the form of forced rationing this winter. Markets have reassessed the risk, with natural gas prices in Europe having fallen sharply from their summer highs and European stocks rebounding in the fourth quarter.

Curmudgeon Note: A new wrinkle is Russia planning to ban oil sales to states that impose a price cap.  That would certainly worsen any European energy crisis. 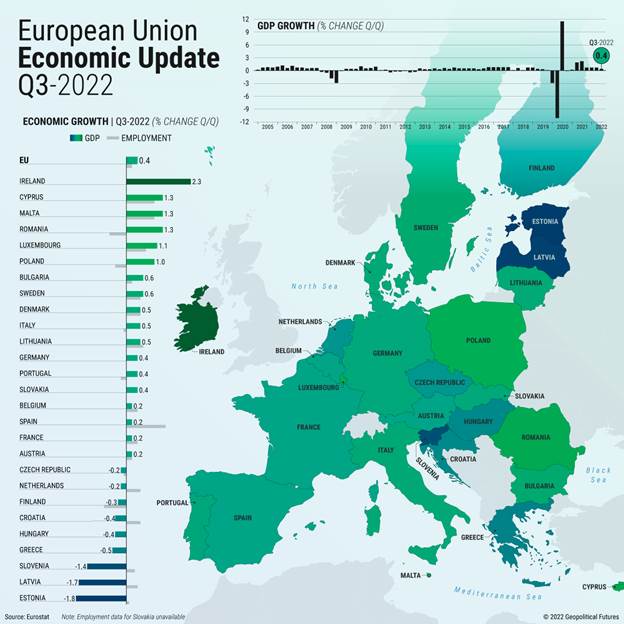 Nothing is more gravely existential then this threat and it’s hardly discussed as a major problem in the mainstream media.

The obvious consequence, assuming the world does not enter a WW III, is the end of Globalism due to the split of the East and West on world trade. In that case, we will have two different economic, monetary, and political systems that are getting further apart.

Several are close to full-fledged financial crises! Around the globe, spiraling debt in low- and middle-income countries is threatening their pursuit of sustainable development. Between 70 percent and 85 percent of developing nations’ debt is in a foreign currency. So far in 2022, around 90 percent of countries have seen their currencies depreciate against the U.S. dollar. If the dollar strengthens further, it will make debt repayment prohibitive which risks multiple defaults.

Government debt levels as a share of gross domestic product have increased by about $2 trillion. With interest rates rising sharply, the debt crisis is putting enormous strain on public finances, especially in vulnerable nations with deficient investment in education, health care and economic growth. As developed countries try to cope with high food and energy prices, they have been reluctant to restructure loans. As a result, several developing countries are close to defaulting and being pushed into full-fledged financial crises. 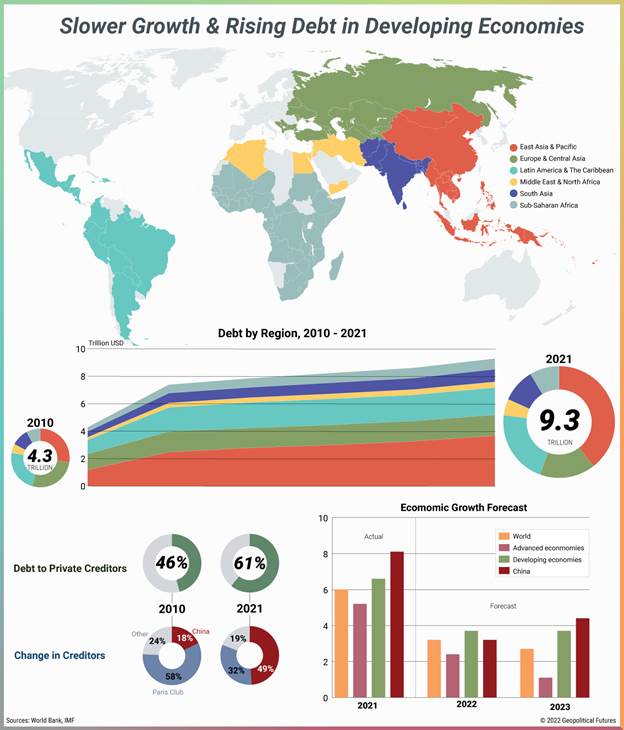 Latin America shifts to the left:

Latin America has seen (once again) a tilt to the left, with six of the largest economies run by leftist governments once Brazil’s Luiz Ignacio Lula da Silva takes office in January. While this could create space for more cooperation on issues of mutual interest (climate protection and expanded intra-regional trade, for example), there are two different competing economic models at play — the more populist economics of Argentina and perhaps Brazil, and the more statist policies in places like Chile and Colombia. Contrary to trend (and regional cooperation) sits Uruguay, which is seeking bilateral trade deals outside the Mercosur [1.] framework and testing the limits of South American cohesion.

Note 1. The Southern Common Market, commonly known by Spanish abbreviation Mercosur, and Portuguese Mercosul, is a South American trade bloc established by the Treaty of Asunción (Paraguay) in 1991 and Protocol of Ouro Preto in 1994. Its full members are Argentina, Brazil, Paraguay, and Uruguay.

Venezuela is a full member but has been suspended since 1 December 2016. Associate countries are Bolivia, Chile, Colombia, Ecuador, Guyana, Peru, and Suriname.

While North Korea’s nuclear weapons normally get all the attention, Pyongyang (capital of North Korea) has stepped up development and testing of conventional weapons, with a particular focus on large-caliber rockets and shorter-range ballistic and cruise missiles. These are relatively low-cost battlefield weapons that give Pyongyang a greater ability to strike at military bases, depots, and staging grounds in South Korea.

By upping its conventional capabilities, North Korea has developed a capability and apparent doctrine of calibrated escalation, something demonstrated this year during U.S.-South Korea defense exercises, when the North launched multiple rounds of missiles and artillery and ran large-scale air exercises of its own.

North Korea continues to rely on nuclear weapons as the backbone of its strategic defense, but the expanded conventional capabilities give the North the ability to step up coercive military behavior.

While seemingly contradictory, this both increases the risks of short, sharp clashes between North Korean and South Korean (or even U.S. or Japanese) forces or assets and decreases the risk of rapid escalation to nuclear conflict or all-out war. Coupled with Japan’s shifting defense posture and continued Chinese military expansion, it portends a more contentious and unstable Northeast Asia in the coming year or two. 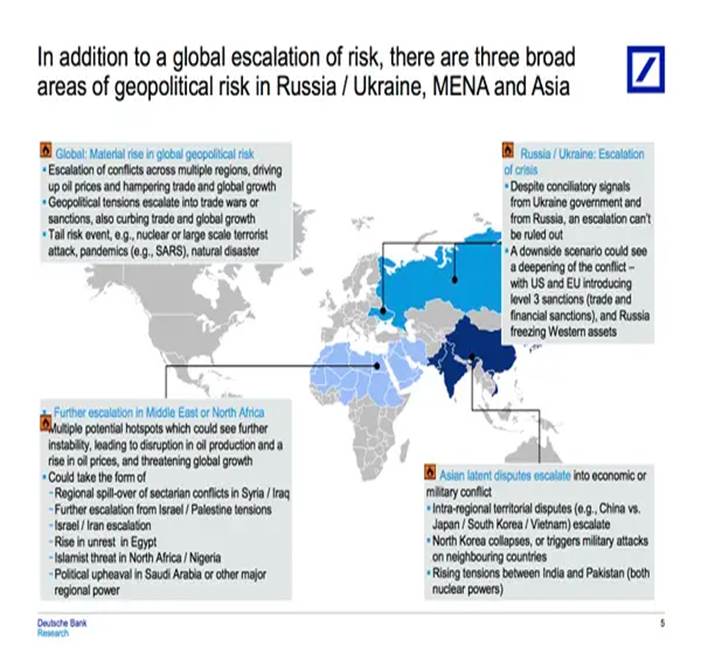 Russia’s Finance Ministry announced that it is doubling the maximum share of Chinese yuan and gold that can be held in the National Wealth Fund (NWF) to 60 percent and 40 percent, respectively. It also reset its accounts in British pounds and Japanese yen to zero. Previously, they could account for up to 5 percent and 4.7 percent of the fund, respectively. In addition, NWF resources can no longer be used to purchase assets denominated in U.S. dollars. The ministry said the changes were made to reduce the share of currencies of “unfriendly states.”

The talk of the BRICS nations (Brazil, Russia, India, China, and South Africa) developing a reserve currency and clearing facility, which will be backed by a commodities basket is real (not a fiat currency like U.S. dollar or Euro). I believe it will happen. However, the timing and the details are not known yet.

Central Banks around the world have bought more Gold in the last four years- more than at any time since 1967!

“The Russian central bank is leading the way as it looks to reduce its reliance on dollar reserves.”

China also has been a huge buyer of Gold. Saudi Arabia is looking like it’s also moving in this direction.  That could threaten the U.S. dollar being the world’s reserve currency!

Geopolitical tensions and uncertainty are likely to boost the price of Gold in 2023 due to its safe haven status.

The obvious world changes are very profound indeed! 2023 has to be considered in the light of these changes. Please do not ignore them.

Happy New Year, stay healthy, happy, warm, and dry. Please let us know your interests for 2023. Till next time…...