Despite Pledge, Bernanke’s Fed Has a Total Lack of Transparency

Ron Paul's 2009 End the Fed called for abolishment of the Federal Reserve System. In that book, Dr. Paul states that Fed is both corrupt and unconstitutional. He argues that the Fed is inflating our currency by creating more and more US $'s. And that was before the massive QE programs, which went into acceleration mode in Sept 2012 with its $85B per month of bond purchases. The CURMUDGEON sincerely believes it's time to dismantle the Fed now and replace it by a more trustworthy government institution.

Our argument is based on the Fed's irresponsible monetary policy which have already caused several asset market bubbles; debasement of our currency (by printing money such that the Fed's balance sheet is north of $4T); lack of transparency (contrary to Bernanke's objective);  and manipulation of markets.  In addition to those complaints, some pundits say that the Fed has been leaking its policy intentions to the big investment banks that they claim own the Fed.

Retired SCU Economics Professor Fred Foldvary believes the U.S. economy would be better off with no Central Bank. He wrote in an email: "In my judgment, the economy would indeed be improved if central banking and governmental money were replaced by free-market money and banking, as analyzed by George Selgin and Lawrence White." Fred thinks the main cause of suppressed employment is fiscal policy. "Taxes, mandates such as medical insurance, restrictive regulations, and excessive litigation make labor more costly to hire, and limit self-employment," he added.

Let's look at the total lack of Fed transparency.

‘Fed talk’ has been an obsession and the main driving force for stock and bond markets since Bernanke’s May 22nd testimony before Congress. Markets have ignored economic reports, valuations, investor sentiment, etc. as they weigh every word from Bernanke's speeches, minutes of Fed meetings, Beige Book releases, and hints from individual Fed governors.

The chart below (courtesy of Street Smart Reports) shows Bernanke's effect on the DJI average (DJIA): 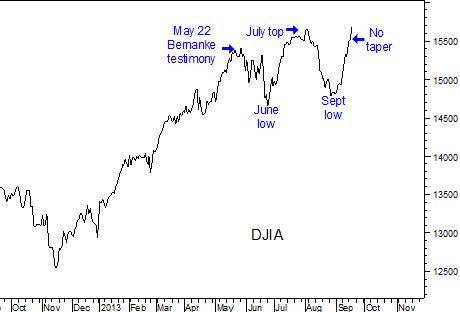 The key points on the chart are as follows:

1. Bernanke’s first warning - a total surprise- of perhaps tapering QE as early as June but certainly by September. That was in his May 22nd testimony before Congress. Result: a stock and bond market plunge.

2. Bernanke's panicked rush to calm markets at the June low, with assurances he didn’t really mean the Fed would scale back bond purchases/QE right away. A sharp rally to new highs.

3. The market peak at the end of July when the hints from the Fed began again, this time that tapering might begin at the September meeting. Result: a market plunge.

4. At the September low, assurances from the Fed that any tapering would be only a baby step. A big rally.

5. The Fed's Sept 18th announcement that it had decided not to taper at all produced another surprise reversal to the upside, with the DJI, S&P 500, and Russell 2000 closing at new highs and the NASDAQ at a 13 year high.

Think about the turning points in the chart above.  Fed Chair Bernanke has repeatedly said it wants the Fed to provide guidance to avoid surprises and calm markets.  Was such transparency and guidance evident anytime in the past four months?

Another point to ponder: Was the stock market's September rally BEFORE yesterday's "no taper" announcement due to leaking of that decision to big banks on Wall Street (who may say own the Fed)?

If so, that's equivalent to massive insider trading.  How about auditing the investment bank proprietary trading desks to see when they increased their long equity positions?