We attribute the recent U.S. equity market rally to Wall Street’s perception (yet again) that the Fed won’t raise rates as much as they’ve hinted at with their seemingly never-ending hawkish drumbeat talk.  While that also drove the rally from July to mid-August which fizzled (all averages broke their June lows in September), the market believes “this time is different.”  Do you?

The “Fed Whisperer” that seemingly sparked this month’s rally on October 21st has just published a WSJ article that implies the Fed will be raising rates higher than they planned due to a resilient consumer.  That despite the Fed’s attempt to reduce consumer spending via a “reverse wealth effect” due to crashing markets.

We examine the Fed’s balance sheet and an under reported shortage of diesel fuel that could drive up prices and keep rates higher for longer. Finally, we conclude with a comment on the November 8th U.S. mid-term elections and a supporting cartoon.

Equity Markets Rally on (yet another) Perceived Fed Back-Off:

The stock market rally that began on Friday morning, October 21st was stimulated by an article in the WSJ by a reporter known as the “Fed Whisperer” (whose real name is Nick Timiraos).  It was very important because Timiraos is supposedly connected to leaked inside Fed information. He let it be known that the Fed was going to hike rates by 75bps in November followed by a lower Fed Funds rate increase (50bps?) in December.

Timiraos wrote, “Some Fed members are concerned about the danger of raising rates too high.” However, he indicated the Fed did NOT want markets to rally as they did from July to mid-August on the expectations of a more dovish Fed monetary policy.

“Markets rallied in July and August on expectations that the Fed might slow rate rises. That conflicted with the central bank’s goals because easier financial conditions stimulate spending and economic growth. The rally prompted Fed Chairman Jerome Powell to redraft a major speech in late August to disabuse investors of any misperceptions about his inflation-fighting commitment.”

“If officials are entertaining a half-point rate rise in December, they would want to prepare investors for that decision in the weeks after their Nov. 1-2 meeting without prompting another sustained rally.”

-->According to several credible sources, this new assessment of the Fed backing off their jumbo rate hikes is what caused the equity markets to rally this month.  It’s the best October rally since 1976 for the Dow Jones Industrial Average (DJIA) which has rallied for the last six consecutive trading days (from the 30,291.18 open on October 21st to the 32,861.80 close on October 28th).

“With a month-to-date gain of 14.40% through Friday, the DJIA, +2.59% is on track for its best monthly performance since January 1976, when it rose 14.41%, according to Joe Adinolfi who reports for MarketWatch.

The DJIA just needs to close higher by 2 basis points on Monday, October 31st to surpass January 1976 as the best month since the 1930s. A historical look at October DJIA rallies is depicted in this table: 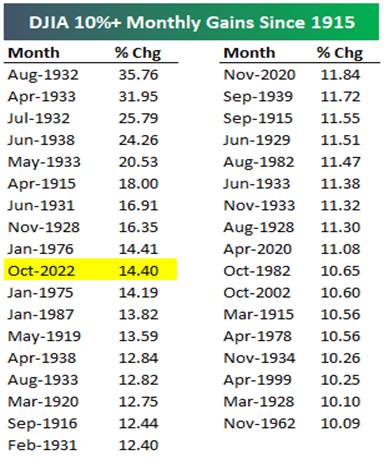 Is the “Fed Whisperer” Now Trying to Talk the Markets Down?

This Sunday, October 30th, Mr. Timiraos wrote a WSJ article implying the Fed will have to raise rates higher than the U.S. central bank forecast at their September 2022 meeting.

From that new WSJ article:

“Some economists think it (the Fed Funds rate) will have to go higher than 4.6%, citing in particular reduced sensitivity of spending to higher interest rates.”

“The big question will be, given the resilience the economy has had to interest-rate increases so far, whether that will actually be sufficient,” said former Boston Fed President Eric Rosengren. “The risks are they’re going to have to do a bit more than they’re suggesting.”

“This is not the earnings season the [Fed] wanted to see,” said Samuel Rines, managing director at Corbu LLC, a market intelligence firm in Houston. “For now, the consumer is too strong for comfort.”

The Commerce Department reported Friday that consumer spending adjusted for inflation rose 0.3% in September from August, a pickup from prior months.

The upshot is that cooling the U.S. economy might require even higher interest rates. The household savings buffer “suggests to me we may have to keep at this for a while,” said Federal Reserve Bank of Kansas City President Esther George in a webinar earlier this month.

Steven Blitz, chief U.S. economist at research firm TS Lombard, thinks the central bank’s policy rate will rise to 5.5%. “A recession is coming in 2023, but there is more work for the Fed to do to create one,” he said.

The danger is that higher interest rates or a stronger dollar make trouble in corners of a global financial system that had come to expect low interest rates to persist.

The original Fed (dot plot) projections for rate increases were: +75bps November 2nd, then 50 bps on December 14th and 25bps in January.   We’ll have to wait for Powell’s November 2nd news conference to get a hint at what’s to expect at the December FOMC meeting (the market now expects a 50bps rate hike) and for early 2023.

IMPORTANT Opinion: The Curmudgeon and I strongly oppose Fed talk (hawkish or dovish) and forward guidance outside of FOMC meetings. We think there should be a quiet period, much like what applies to companies before earnings releases.  Furthermore, the Fed should NEVER use a “whisperer” to convey its plans to the markets.

Instead, the Fed should deliberate and debate the course of monetary policy at each FOMC meeting and not say anything for public consumption between meetings!  Such silence would be golden for the markets.

Despite the jumbo rate hikes and accelerated pace of Quantitative Tightening (QT) that commenced in September, the Fed’s balance sheet is still higher than it was on 11/30/21 when the Fed admitted that inflation was NOT TRANSITORY.  As we’ve previously noted, it’s mind boggling to us that Powell and his motley crew waited till March 2022 to stop QE and raise rates by only 25bps.

On October 19th, Bloomberg reported that the U.S. has just 25 days of diesel supply, the lowest since 2008, according to the Energy Information Administration. At the same, the four-week rolling average of distillates supplied, a proxy for demand, rose to its highest seasonal level since 2007. While weekly demand dipped slightly, it’s still at highest point in two years amid higher trucking, farming, and heating use.

The diesel crunch comes just weeks ahead of the midterm elections and has the potential to drive up prices for consumers who already view inflation and the economy as a top voting issue. Retail prices have been steadily climbing for more than two weeks. At $5.324 a gallon, they’re 50% higher than this time last year, according to AAA data.

Fox News host Tucker Carlson ripped the Biden administration Thursday for the U.S.’ ongoing diesel shortage, saying that America faces an “economic catastrophe” if stocks aren’t replenished.  “Thanks to the Biden administration’s religious war in Ukraine, this country is about to run out of diesel fuel. According to data from the Energy Information Administration, by the Monday of Thanksgiving week, that’s 25 days from now, there will be no more diesel [fuel]. So, what’s gonna happen then? Everything will stop,” Carlson said.

The mid-term elections on November 8th are of great importance and we strongly recommend all Americans vote. The Curmudgeon spent the better part of two days reviewing the candidates and CA/Santa Clara propositions and is voting today.

However, don’t look to the polls to forecast the election results as per this cartoon: 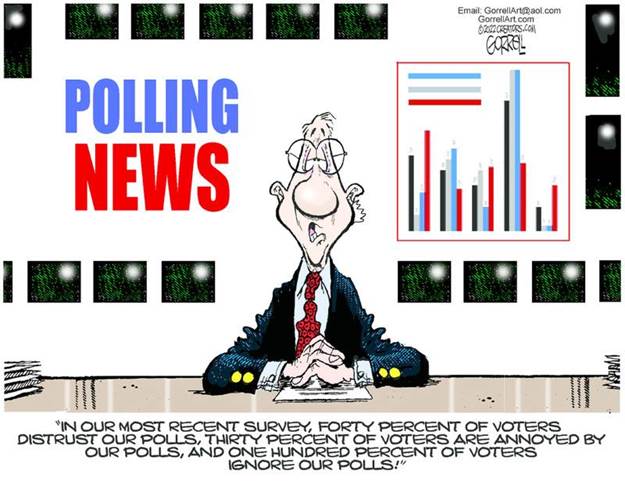 With this week’s FOMC meeting, please think about this quote:

“The process [of monetary inflation] gives rise to a redistribution of income in favor of those who first received the new injections or doses of monetary units, to the detriment of the rest of society, who find that with the same monetary income, the prices of goods and services begin to go up.”    ……………. Jesus Huerta de Soto is a Spanish economist of the Austrian School. He is a professor in the Department of Applied Economics at King Juan Carlos University in Madrid, Spain, and a Senior Fellow at the Mises Institute

Be well, stay healthy, try to cope with the financial chaos and all asset wipe-out the Fed has created. Wishing you peace of mind, and till next time………