We provide our perspective on the market massacre on Friday as well as updates on various other topics we’ve discussed in previous Curmudgeon blog posts.

Fed Chairman Jerome Powell is generally a moderate likable type of man, who speaks in words and tones that are well balanced and temperate. Not at Jackson Hole, Wyoming!

In a 10-minute speech (some say it was only 8 minutes) at the annual Jackson Hole Economic Symposium on Friday, Fed Chairman Jerome Powell said returning the economy to price stability will take “some time” and will require bringing “some pain to households and businesses.” He said that would be the “unfortunate costs of reducing inflation.”

“We must keep at it until the job is done,” Powell said. “Restoring price stability will take some time and requires using our tools forcefully to bring demand and supply into better balance.” 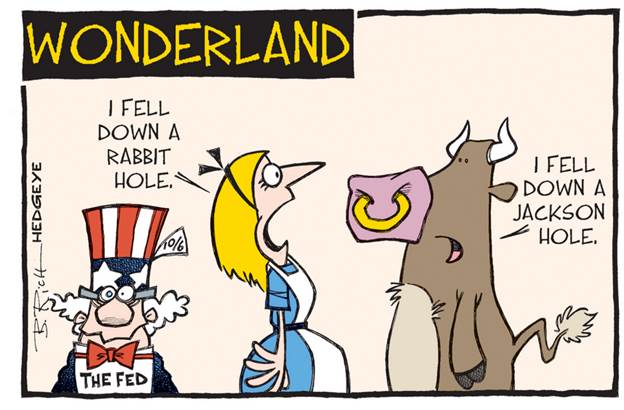 Almost all other asset classes declined after Powell’s speech.  Bitcoin, corporate and high yield bonds, the 10-year T-note, REITs, gold and silver also ended substantially lower on Friday.  As expected, the U.S. dollar rose in a “flight to safety.”  A diversified, balanced portfolio did not help investors one bit on Friday!

It’s astonishing that one man can have such tremendous impact and influence on markets!   From an institution (the Fed) which is unconstitutional and is not an official branch of the U.S. government!

Powell looked like General Santa Anna attacking the Alamo on March 6, 1836.  The steep financial losses on Friday are equivalent to what Davy Crockett, Jim Bowie, and Bill Travis must have seen and felt like as Santa Anna’s troops stormed the Alamo. It was the worst day of the year for the S&P 500 and second worst for NDX 100.  It looked sort of like this: 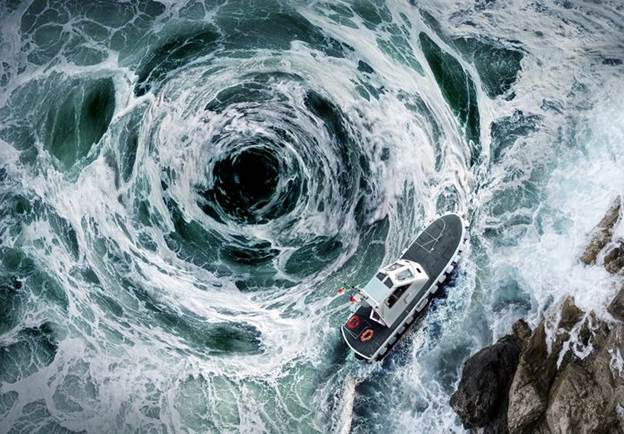 What Happened to the Fed Pivot?

For quite some time there’s been talk of a “Fed Pivot” from raising short term interest rates (followed by a pause) and then lowering rates in 2023.  Powell dispelled that notion in his Friday speech.  “The historical record cautions strongly against prematurely loosening policy,” Powell said.

To understand the market mentality of looking for the Fed to “Pivot” we need to understand that over the last 13 years, the Fed has trained equity investors and traders to be lemmings which follow the Fed’s talk and action rather than the real economy.

-→As a result of the Fed’s largesse, the S&P 500 outperformed the real economy by approximately EIGHT TIMES!  That was mostly due to the Fed’s QE and ZIRP, which injected unprecedented amounts of liquidity into financial markets.

So, when Powell nixed the notion of a Fed Pivot on Friday, equity markets collapsed.

Fed Has Tightened Beyond Raising Rates:

In addition to the rapid and large increases in the Fed Funds rate, the Fed has tightened credit in several other ways:

Note 1. A reverse repurchase agreement, or "reverse repo," is the purchase of securities with the agreement to sell them at a higher price at a specific future date.

Inflation has declined, mostly due to lower gas prices. On July 26th, the Biden Administration announced that it was releasing the next Notice of Sale to supply additional barrels of crude oil from the Strategic Petroleum Reserve (SPR) onto the global market, building on the more than 125 million barrels of oil that have already been sold.

Consumer prices rose 6.3% in July from a year earlier, down from 6.8% in June, as measured by the Commerce Department’s personal-consumption expenditures (PCE) price index which was reported on Friday.  The core PCE index— which excludes volatile food and energy prices—increased 4.6% in July from a year ago, down from 4.8% in the year through June. On a monthly basis, core prices rose a seasonally adjusted 0.1%, slowing markedly from June’s 0.6% pace.

The main beneficiary of 13 years of stock market gains have been the richest Americans.  Those that do not own equities (~44% of the U.S. population) have not profited from the Fed’s super easy monetary policy, which included four rounds of QE and holding the Fed Funds rate at zero (ZIRP) for exceptionally long periods of time.

According to Gallup, The wealthiest 10% of Americans hold 89% of stocks, worth $35.87 trillion.  The top 1% of Americans (in terms of net worth) increased their ownership of stocks during the pandemic while the value of their stock holdings grew by $10 trillion.

Also, the Fed is owned by the richest families (whose names are a secret).

Can the Fed Manipulate the Economy to Lower Inflation?

Since Powell admitted that inflation was NOT transitory on November 30, 2021, the Fed’s balance sheet actually INCREASED by ~2.2%!  So, the Fed was not really focused on curtailing inflation.

Now the Powell led Fed has reversed course with talk and actions that have caused financial markets to fall this year.  The Fed believes that will cause a “reverse wealth effect” which will result in reduced consumer spending and smaller price increases.  We’re not sure if that will work. The economy is not that easy to manipulate.

It is still my belief (as I do not trust a word the Fed says) that if new data indicates the U.S. economy is steeply declining, the Fed will not raise rates at its September 20-21, 2022 FOMC meeting.

Conversely, If the economy holds up according to new U.S. government reported economic numbers, then the Fed may raise rates by 50 to 75 bps at that meeting.  That would not be good for the economy and markets.

Cleveland Federal Reserve President Loretta Mester said that the Fed will move rates higher until there is compelling evidence that inflation is easing, adding that it’s too soon to say whether price growth has peaked.  “It’s really premature to say inflation has peaked and that it’s on a downward trend,” she said in an interview on Yahoo Finance.

“We want it to be on a sustainable downward trend and I’m just going to need to see several more months of better inflation data to be able to even say that it’s peaked.”  That was a repeat of comments made earlier in the day on Bloomberg Television, where she said, “rates would likely have to move above 4% and stay there for some time to see price growth decelerate.”

But as Mike Tyson learned, “Everyone has a plan till they get punched in the mouth.”  In this case, recession and large job losses substitute for the mouth!

Investors have reacted negatively to the Fed’s hawkish tone.  They’ve pulled money from U.S. stock funds with $1.2 billion in net outflows in the period ended Wednesday, according to Refinitiv Lipper data.  That’s after a brief stretch of inflows in the first half of August.  All told, investors yanked $44.1 billion from equity funds in June and July showing a lack of confidence in the recent bear market rally.  Junk bond funds had more than $4 billion in net withdrawals this past week.

U.S. and Europe in Recession; China and Japan Slowing:

We believe the U.S. economy is in recession and raising rates in a recession is like rubbing salt in a wound.  We’ve discussed this in many recent Curmudgeon posts (check Links of Interest @fiendbear.com).

Paul Samuelson (whose textbook I studied in college but learned virtually nothing) wrote: “Economists have long defined a recession as a period in which real GDP declines for at least two consecutive quarters…. Let those who will write the nation's laws if I can write its textbooks."

Europe is also in recession, as we’ve previously noted in many recent Curmudgeon posts.  In April, UK energy prices rose 48% and are forecast to rise 80% in October.  Germany is greatly dependent on Russia supplied natural gas, whose price has increased sharply while the supply has greatly decreased due to the war in Ukraine.

Economies in China and Japan are also declining rapidly:

The Fed is likely to cause something worse than a recession if they actually execute the rate increases they’ve been talking about.  Financial markets will decline a lot more and Americans will be poorer.

We’ll soon see if the Fed is real or bluffing about large rate rises at the September FOMC meeting.

A message for Fed Chairman Powell, “Be careful what you wish for and remember the Alamo!”