The Calm Before the Economic Storm

This week will set-up the markets for the next two months.  Victor explains why in this post. We also provide an interesting chart from BofA Global Research, market comments and an assessment of Fed Chairman Jerome Powell and his cohort Janet Yellen.

The Fed is expected to raise rates by 75 basis points at the July 26-27th FOMC meeting.  What will be important is the Fed’s tone and language after the announcement.

That will be the last FOMC meeting till 9/20-21/2022, which is 48 days before the U.S. mid-term elections in November. The next important Fed get together will be the Kansas City Fed sponsored 2022 Economic Policy Symposium titled "Reassessing Constraints on the Economy and Policy," in Jackson Hole, Wyoming on August 26-28th. The Fed’s remarks at that conference may provide additional insight into its monetary policy, especially with respect to quantitative tightening which is scheduled to increase in September.

In addition, next week will be loaded with volatility due to the FOMC meeting and earnings reports from many large cap stocks (Alphabet/Google, Amazon, Apple, Meta/Facebook, Exxon-Mobile, etc.) plus other prominent companies.

Earnings season is still in its early innings, with about a fifth of companies in the S&P 500 having reported results. About 70% have topped consensus estimates, and 26% have missed projections, according to FactSet.

Analysts have cut their profit estimates in recent months, but many investors say the projections are still too rosy. Corporate earnings for the 2nd quarter are expected to rise 4.8% based on a blend of actual results and projections. If that figure holds, it will mark the slowest growth since the fourth quarter of 2020.

There are also several important economic reports that will be released this coming week:

Based on the Atlanta Fed GDP Now estimate of -1.6%, 2nd quarter GDP will likely be a negative number.  Many pundits will say that puts the U.S. in a “technical recession” (two consecutive quarters of negative real GDP growth).  Other economists will play down the recession talk as they believe unemployment has to start rising significantly for a recession to take hold.

The ISM reports on manufacturing and services will be released the first week of August.  Those numbers will be very important and should be below 50 if we are really in a recession.  For reference, the June Manufacturing PMI® (latest reading) was at 53%.

Construction spending and U.S. International Trade in Goods and Services reports will be released on August 1st and 4th, respectively.

From EPM Macro Research: “The downturn in economic activity has become a consensus view, over a year after the deceleration in growth began.  Leading indicators of real economic growth imply that more downside is coming over the next 1-3 months.  Economic data will continue deteriorating across all corners of the economy, including income, consumption, production, and lastly, employment.”

→ I believe the U.S. economy is weak and ready to fall off a cliff (sort of like Wile E Coyote chasing the Road Runner) as per the image below: 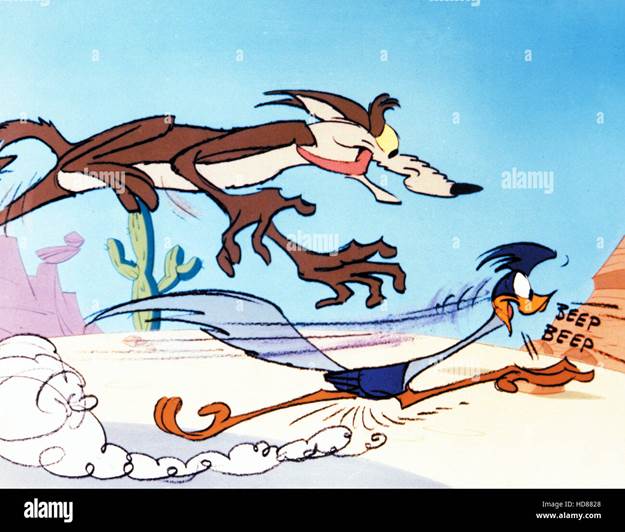 The market is overbought from the rally in stocks and bonds last week.  Therefore, I’m assuming down for equities into Wednesday’s FOMC announcement.  Also, the S&P 500 is just beneath the downtrend line at 4200, as shown in this chart (courtesy of Elliott Wave International):

I believe U.S. bonds have made their price lows and should do well this coming week.

“Consensus earnings estimates are still too high, but the market had already discounted in many companies the expected decline in earnings,” said Kent Insley, chief investment officer of Tiedemann Advisors.  “The next few quarters are going to be more representative of the slow growth, persistent inflation environment,” Mr. Insley added
.……………………………………………………………………………………………………….

Chart of the Week (Courtesy of BofA Global Research):

Without a doubt, Jerome Powell is the worst Fed Chair since G. William Miller (1978-79).  Powell was educated as an attorney and politician who knows little of economics as we’ve seen with respect to his “transitory” inflation remarks and ignorance of the strong correlation between money supply growth and rising prices of goods and services.

How’s this for duplicity: At his May 4th press conference, Powell declared that a 75-basis-point (bps) increase in its federal-funds target rate was “not something the committee is actively considering.” At the mid-June FOMC meeting, the rate was raised by 75 bps, to the present 1.50%-1.75% range; the decision apparently was leaked to The Wall Street Journal a couple of days earlier.

Here is how he is described by Wikipedia:

“Jerome Hayden "Jay" Powell (born February 4, 1953) is an American attorney and investment banker who has served as the 16th chair of the Federal Reserve since 2018. Powell earned a degree in Politics from Princeton University in 1975 and a Juris Doctor from Georgetown University Law Center in 1979. He moved to investment banking in 1984, and worked for several financial institutions, …”.

The Janet Yellen (former Fed Chair and current U.S. Treasury Secretary) and Jay Powell combo have not been an effective team. Whatever they do has and will turn out badly for the U.S. economy and its residents.

Where America is today is very well described by Frederic Bastiat [1.]

“When plunder becomes a way of life, men create for themselves a legal system that authorizes it and a moral code that glorifies it.”

Note 1. Claude-Frédéric Bastiat (30 June 1801 – 24 December 1850) was a French economist, writer, and a prominent member of the French Liberal School.  A member of the French National Assembly, Bastiat developed the economic concept of opportunity cost and introduced the parable of the broken window.[2] He was described as “the most brilliant economic journalist who ever lived” by economic theorist Joseph Schumpeter

Be well, stay healthy, try to find diversions to uplift your spirits (Curmudgeon goes to live concerts, walks in nature, and does volunteer work), wishing you peace of mind, and till next time………