After a review of Friday’s markets, we examine Fed talk’s huge effect on the markets, Sentiment Trader findings, B of A Global Research and EPB Macro Research highlights which are illustrated with very relevant charts.  Please let us know what you think of this post.

Sparked by hawkish Fed comments, U.S. stocks tumbled on Friday with the S&P 500 registering its biggest one-day loss in almost seven weeks.  The 2.8% decline in the benchmark S&P 500 came a day after Federal Reserve chair Jay Powell said a 0.5% interest rate rise was “on the table” to combat soaring inflation. The weekly decline was also 2.8%. The technology-heavy Nasdaq Composite lost 2.6%, for a 3.8% weekly decline as investors pulled out of growth stocks as inflation expectations have surged.  U.S. stocks are within one or two percent of the March 2022 lows.

This week, we saw evidence of a split stock market, with many issues at 52-week highs or 52-week lows. The Nasdaq 100 has gone from year-over-year gains of more than 50% to a negative total return.

The yield on the 10-year Treasury note (which underpins borrowing costs worldwide) was steady at 2.9%, also close to its highest level since late 2018.  The yield curve has suddenly surged while investors battle high and rising inflation.   A steepening yield curve is typically, but not always, associated with more robust economic conditions.  This seems to be an exception condition as a stronger U.S. economy isn’t likely due to all the headwinds directly ahead.

Fed Talks the Talk – This Time the Market Reacts:

Fed Chairman Jerome Powell on Thursday sent his strongest signal yet that the Fed would raise borrowing costs rapidly to “fight” inflation which has been accelerating as per this chart:

“It is appropriate in my view to be moving a little more quickly,” he said at an IMF panel.  “We’re going to be raising rates and getting expeditiously to levels that are more neutral, and then that are actually tightening policy if that turns out to be appropriate, once we get there,” Powell added.

Earlier in the week, Federal Reserve Bank of St. Louis President James Bullard said he wouldn’t rule out the prospect of a 75-basis-point rate hike next month.

Markets are now pricing in a fed funds rate of 2.8% by the end of the year, up from the current 0.25% and 0.5%.  Many pundits say the Fed will raise rates by 50bps at EACH of the next three FOMC meetings.  But look at the ultra-low rates in place since the 2008-2009 financial crisis, as per this graph:

Apparently, the nonstop, multi-month talk about the Fed raising interest rates to curb inflation had not been properly discounted by the equity markets. Why not?  For many years, we’ve said that the market is not a “discounting mechanism” and perhaps never was.  We wrote about that 10 years ago in this post.

This cartoon captures the Fed’s tricky task of raising rates to tame inflation without causing a recession:

One of the requirements for a healthy environment is that 52-week highs on the NYSE must outnumber 52-week lows. That's not happening with any consistency. Not only that, there is currently a remarkable split in the market, with too many securities at both extremes.

This has been a familiar problem for months. The 50-day average of the HiLo Logic has now climbed above 2%, and the Back test Engine shows that when the 50-day average got this high, three months later, the S&P 500 was higher only 8 of 22 times. Returns across every time frame were terrible.

The air has been let out of the Big Tech balloon. For the first time in over a year the tech dominated NASDAQ 100 (NDX) index has a year-over-year loss.  This comes on the heels of what had been a historic rise as shown in this chart: 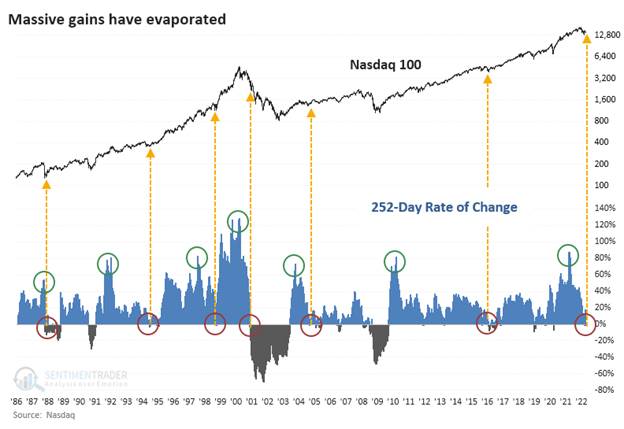 Looks to us that the bear is in control of the market at this time: 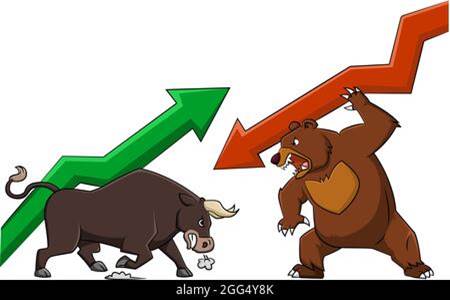 Few economists believe the U.S. will be in recession this year, despite the widely anticipated Fed rate hikes. However, BofA’s Global Fund Manager Survey indicates optimism around global growth has fallen to an all-time low. 26% of respondents say a global recession is the greatest “tail risk” for equities with hawkish central banks a close second at 25%.

Meanwhile, in a poll carried out on behalf of CNBC last month, 81% of U.S. adults said they believe a recession is likely in 2022. By contrast, Goldman Sachs economists recently put the odds of a U.S. recession in the next year at 20-35%.

The highly respected EPB Macro research firm thinks the economy is weakening, but a recession is NOT YET an imminent risk.  That may change by this summer.  Here’s EPB’s executive summary, a look at declining real income growth, and recession risk.

·        Real growth continues to decline and will soon fall “below trend.”

·        Lower real income will pull down consumption and then production/employment. 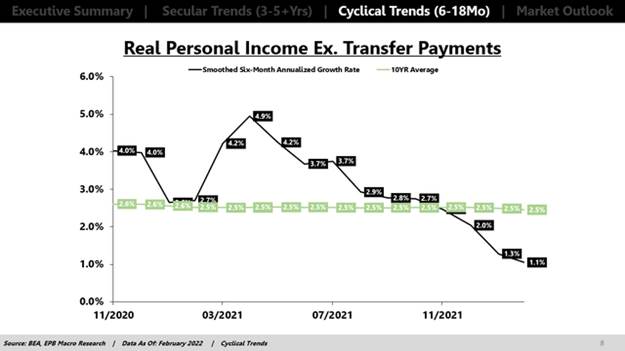 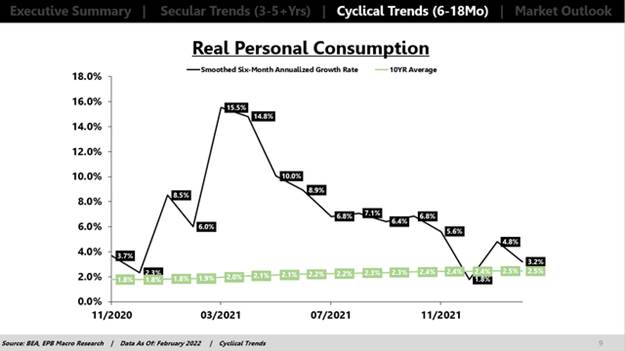 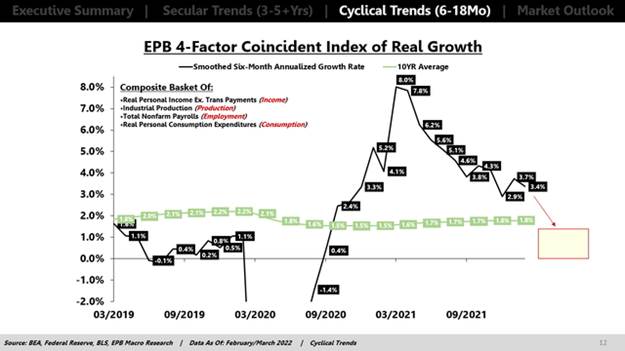 It will soon become more apparent that U.S. stocks are in a bear market and that real economic growth will fall closer to the 1% range over the next three to six months. The Atlanta Fed GDP Now index is currently forecasting 1.3% GDP growth for the current quarter.

Once U.S. real economic growth slows into the 1% range, recession risk is highly elevated which will make for a very bearish stock market.

EPB’s Eric Basmajian sums up as follows: “The conditions for a recession will likely be in place by the summer. By tracing the economic sequence back to its usual origins, we can confirm that there's limited evidence that an inflection towards higher economic growth is on the horizon.”