Not to be outdone, the Nasdaq erased a 4%+ intraday decline to close higher on the day.  That was just the sixth time (since 1988 when open/high/low/close data begins) that the Nasdaq has done that.

Below is a table showing the prior occurrences along with the NASDAQ index's performance in the days and weeks that followed:

Also, more than a quarter of Nasdaq stocks are now at 52-week lows. Among sectors, Healthcare stocks have been hit even harder than Technology shares. 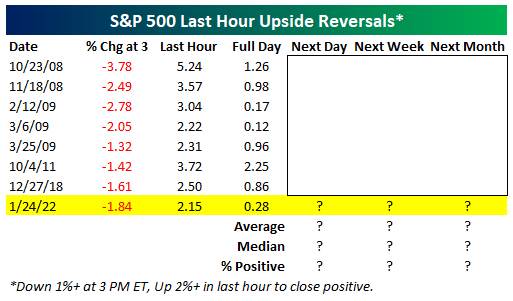 The small-cap Russell 2,000, which has been the weakest index for months, out-gained all the major U.S. stock indices today with a 2.29% move higher.  At its low for the day, the Russell was down only 2.84%.  This was just the 21st time that the Russell has erased a 2%+ intraday decline to close higher by more than 2% on the day, according to Bespoke. 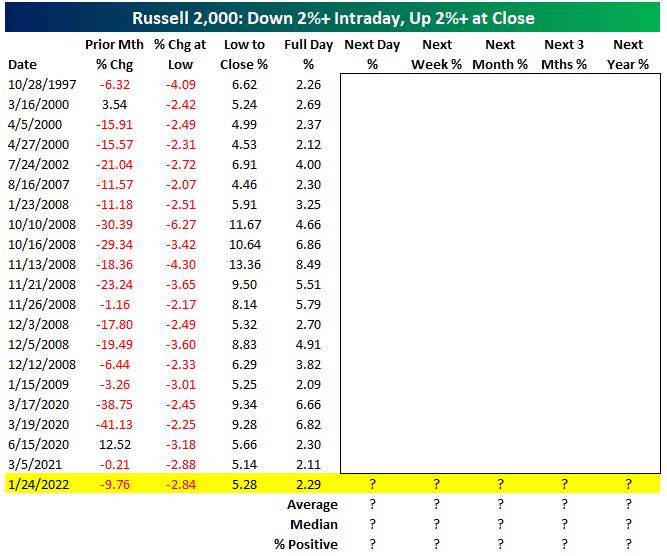 Options activity hit the highest level ever on Friday, with more than 62 million contracts changing hands, according to CBOE Global Markets data, and volumes remained elevated on Monday.

“That’s creating this very high intraday volatility that we’re seeing,” said Peter van Dooijeweert, a managing director at Man Solutions, a unit of investment firm Man Group of London.  “We’ve seen plenty of ‘buy the dip’ type activity,” Mr. van Dooijeweert said. But for the most part, “the ‘buy the dip’ crowd is starting to get overrun by the ‘sell the rally’ crowd.”

In a note to subscribers, Jason Goepfert of Sentimentrader wrote:

“A historic reversal: Stocks enjoyed one of the best reversals in history on Monday, especially the Nasdaq. But the S&P 500, the most benchmarked index in the world, enjoyed a notable reversal of its own. The S&P was off by more than 3% and traded to a 6-month low, before reversing all of its losses.”

“We've highlighted the danger of relying on single-day price patterns many times, and this is no different. The sample size is tiny, but all equivalent reversals saw losses either 1 or 2 weeks later.” 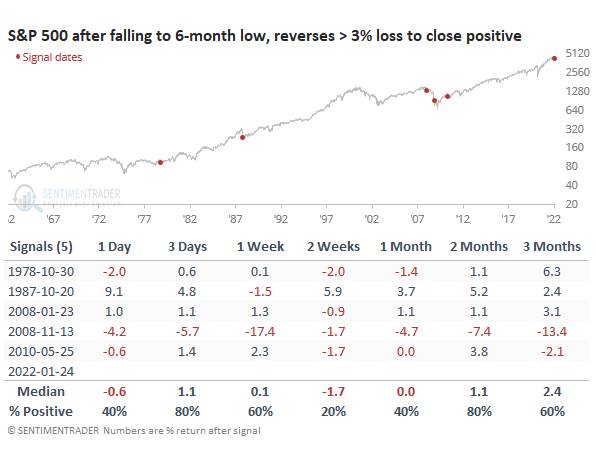 Victor and I have seen these huge, bungee jump rebounds in the last 60 to 90 minutes of trading many times before. They almost always come when the market averages are all down intra-day by 10% or more.

The most notable upside reversal was on October 4, 2011, when U.S. stocks closed significantly higher, despite the large losses going into the last half hour of trading. At the close of trading that day, investors ignored the S&P 500's early slide into bear territory (-20% decline) and furiously bought back into stocks.

There is similar anecdotal evidence of reversal days in 2015 and 2019 such that there is a “mysterious and invisible” last hour buyer that supports the market to prevent a serious decline.

Personally, I believe the invisible hand belongs to global investment banks, who are encouraged to buy stock index ETFs and stock index futures by the Plunge Protection Team or PPT (officially known as “The President's Working Group on Financial Markets”).  It’s because the U.S. government and the Fed want to avoid a bear market for fear it would cause a recession.

Victor explained how markets are manipulated to the extreme of history in this post.

“The return to normalization that we will see this year will include more moderate growth and higher interest rates. That’s a difficult environment for large-cap tech.” – Ryan Jacob, the portfolio manager of the Jacob Internet Fund.