More news and views you might’ve missed this week.  Please let us know what you think.

Neutral as the New Restrictive, by Jurrien Timmer, Director of Global Macro at Fidelity:

Is neutral the new restrictive? The economy has become so levered to low rates, perhaps a return to 2% is all that the Fed can do or needs to do. Look at this chart, and I'll explain. (THREAD) /1 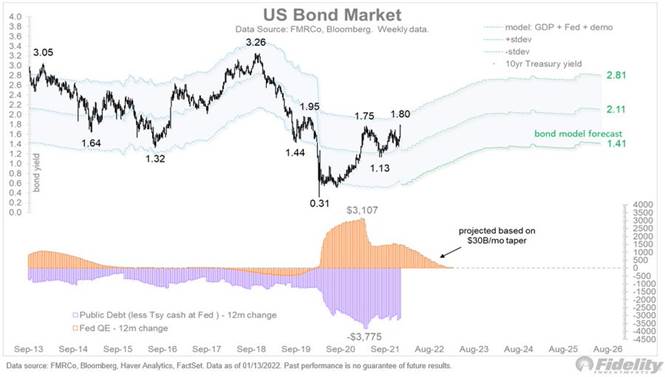 In the past, the monetary policy pendulum would swing all the way from 2-3% below R-Star to 2-3% above. That was the full Fed cycle. But in 2018, it only made it back to neutral, before the markets started to seize up. /2

So maybe neutral is the new-restrictive. Indeed, my bond model above suggests as much, with 2% as the upper bound of a rising range. /3

And with the TIPS break-even stable at the 2-2.5% area, a return to 2% on the 10-year will bring it almost back in line with where nominals have traded in the past vis-à-vis inflation expectations. /4

Perhaps German insurance companies and Japanese pension funds will pick up some of the slack when the Fed stops buying US Treasuries. /END

Debt Bubble- What Can Central Banks Do Today?

This is the sixth chapter of the documentary. It studies what the Central Banks can do today to solve our debt problems and looks at what happened the last time it was attempted, which led to a crash in the markets.

Henry Kaufman is one of the rare Wall Street veterans who can authoritatively draw parallels between the inflation scare of the 1970s and today’s alarming run-up in prices. And he has zero confidence Fed Chair Jerome Powell is ready for the battle it now faces.

“I don’t think this Federal Reserve and this leadership has the stamina to act decisively. They’ll act incrementally,” Kaufman, 94, said in a phone interview. “In order to turn the market around to a more non-inflationary attitude, you have to shock the market. You can’t raise interest rates bit-by-bit.” 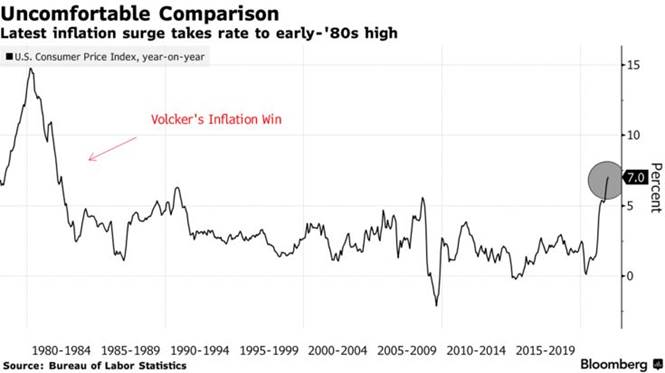 A more serious pledge to tame inflation would require the Fed going much further, Kaufman said. Volcker’s 1979 decision to restrict the supply of money drove short-term rates to excruciating levels but eventually, also crushed inflation. Prices, rising at an annual 14.8% in March 1980, were ticking up at just 2.5% a year by July 1983. Volcker emerged a hero.

If he were advising Powell, Kaufman said he’d urge the Fed chair to be “draconian,” starting with an immediate 50-basis point increase in short-term rates and explicitly signaling more to come. Plus, the central bank would have to commit in writing to doing whatever is necessary to stop prices from spiraling higher.

“The longer the Fed takes to tackle a high rate of inflation, the more inflationary psychology is embedded in the private sector -- and the more it will have to shock the system,” Kaufman said.

Upon examination of the actual Advance/Decline line data, we find that bond CEFs (Closed End Funds) give a good message about the health of the liquidity stream that affects the entire stock market.  So, if anything, they are making the composite A-D data better by virtue of their inclusion in it.  This week’s chart shows a big bearish divergence versus the S&P 500 price trend. 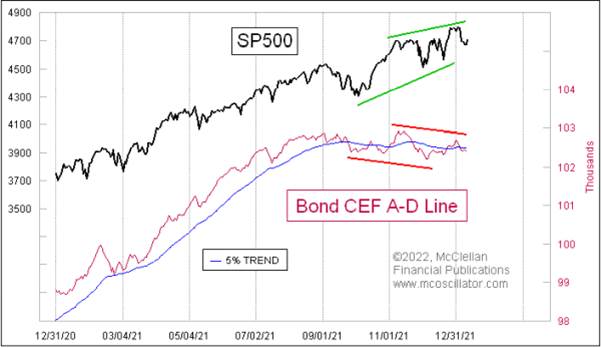 The message of the current divergence shown above is that liquidity has suddenly become a problem, and it is affecting the more liquidity-sensitive issues first.  That can be a prelude to that same illiquidity coming around and biting the big cap stocks that drive the major averages.

Most who hear this message about the current divergence between the SP500 and the Bond CEF A-D Line won’t believe in it, because these bond CEFs are interest rate sensitive contaminants to the proper A-D data.  This is fine with me that they don’t believe in it.

Jones (often referred to as “Tudor”), who won fame for predicting the stock-market crash in October 1987, has been a sharp critic of Powell and the Fed, previously complaining that policy makers were “inflation creators not inflation fighters.”

Powell is “going to play catch-up. And he’s got a lot of catching up to do, and I think that’s why you’re seeing them talk about quantitative tightening, because I don’t think he can catch up fast enough to try to deal with the inflation problem that he has right now,” Jones said. Quantitative tightening refers to the Fed shrinking its balance sheet, which has expanded sharply since the pandemic took hold because of the central bank’s quantitative easing measures.

“I know that I think it’s going to be tough sledding for the inflation trades, the pandemic going forward. So, the things that performed the best since March of 2020 are going to probably perform the worst as we go through this tight tightening cycle.” 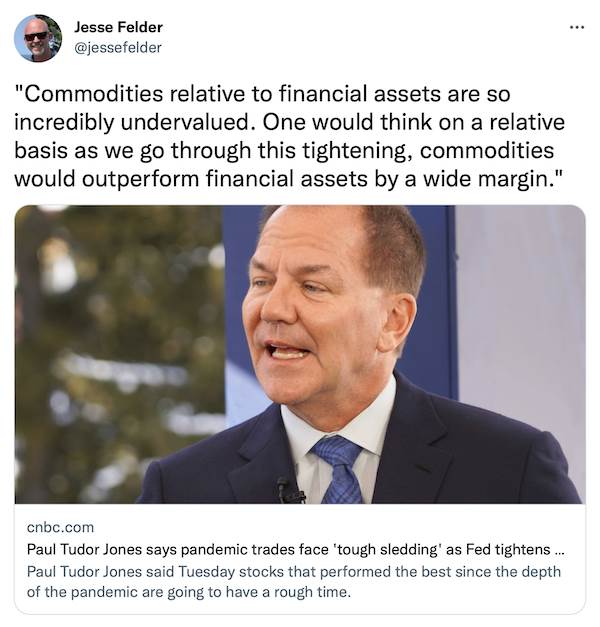 This shows how incredibly overvalued some S&P 500 stocks are today.

S&P 500 Price to Sales Ratio (P/S or Price to Revenue) = Current price to sales ratio is estimated based on current market price and 12-month sales ending June 2021 — the latest reported by S&P. 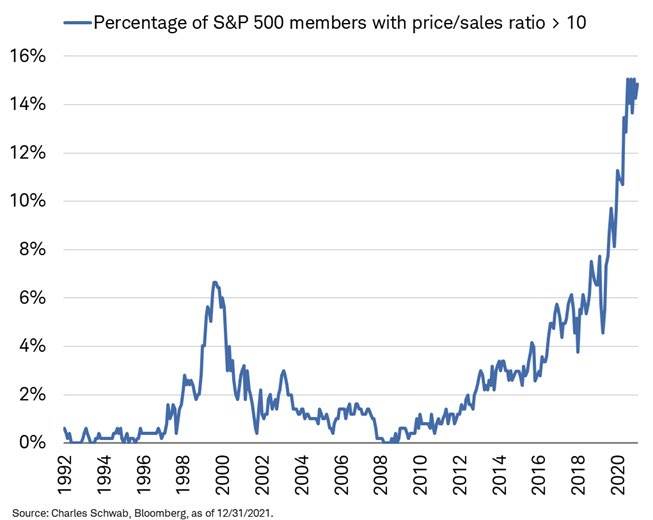 The wind down of pandemic-era monetary policy has pushed global levels of negative-yielding debt down to $10tn for the first time since April 2020.

Government bond prices around the world have fallen since the start of this year, as investors position for central banks to lift interest rates and end large-scale asset purchases in a bid to contain surging inflation.

Bond yields — which rise as prices fall — have, in turn, jumped to their highest level since before the coronavirus pandemic took hold in many markets.  In the eurozone and Japan, swaths of government debt have traded at sub-zero yields in recent years — a scenario that occurs when prices climb so high that investors are certain to lose money if they hold their bonds to maturity. But a drop in bond prices has led many such yields to move back into positive territory.

“This is a reflection of the changing times and the changing monetary policy landscape,” said Kristina Hooper, chief global market strategist at Invesco US. “A reduction in negative yielding debt is a symbol of that desire to return to normal.”

History cautions that the end of extreme bubbles does not augur well for those arriving last to the party.

Today, what is most expensive is what is the most extremely abstract — the enterprises that have the greatest “hypotheticality”, the anti-real as it were. The crowd adores everything that is at the far reaches of psychological distance — in time, in place and in familiarity. We all but need binoculars to see it out there on a far horizon. Futuristic investment themes like space travel speak to our insatiable appetite for the psychologically distant opportunity.

We’ve come a long way from the intense concreteness at the bottom of the 2008 financial crisis, when the greatest psychological distance investors were willing to consider was about as far as the mattresses in which many were intent on stuffing their physical cash and gold.

The net result of the high confidence is startling: investors are now committing the most money to the most abstract opportunities in history while paying the least amount of attention.  Blind investing is one thing, but the extreme approach by investors cautions that we may have reached sentiment peak for the record books over the past year.

As I look ahead, the greatest risk to the financial markets isn’t a decline in corporate earnings or a policymaker misstep, but an abrupt change in investor thinking. After years of devouring abstraction, does the crowd turn to more substantive investment themes — a year of getting real? That process would be far from smooth. Even if more solid ground is better for the long-term direction of markets, those who rushed in when prices were “to the moon” will be hurt as valuations return to earth.

“The markets have come to believe that if there’s a major correction in the equity market, Powell will help them out,” said Komal Sri-Kumar, president of Sri-Kumar Global Strategies. “The result is a seesaw motion in which the market corrects in anticipation of tightening, then the Fed eases and the market goes up.”

“The Fed has instilled a sense of complacency in the markets.  That’s going to make their job a lot harder from here, said Rick Rieder, head of the global asset allocation team at BlackRock.  “If they waited too long and have to brake hard on the other side, it will cause the markets to go down hard.”