Fed Has Difficult Task to Contain Inflation Without Crashing Markets

News and views you might’ve missed this week, which the mainstream media tends to downplay or ignore.  Please let us know what you think. 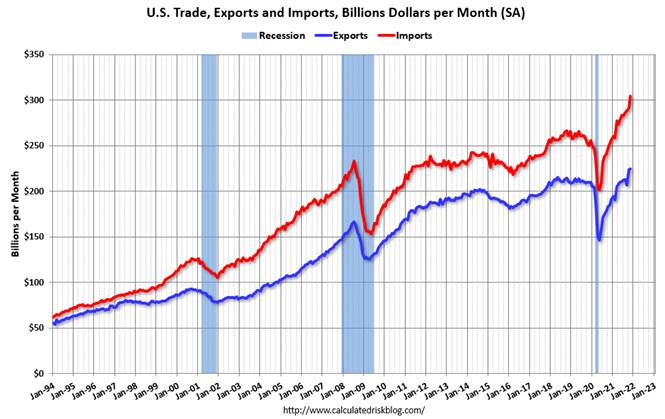 The U.S. Census Bureau and the U.S. Bureau of Economic Analysis announced on Thursday that the U.S. goods and services trade deficit was $80.2 billion in November, up $13.0 billion from $67.2 billion in October, revised.

Curmudgeon Comment: A trade deficit, in theory, should weaken the U.S. currency due to net dollar outflows as imports exceed exports.  Yet the U.S. dollar hasn’t weakened (yet) because it’s the world’s reserve currency.  However, when the DXY index declines, we expect it to decisively take out the June 2021 low of 81.  The DXY closed Friday at 95.74 which was -0.6% lower than Thursday’s close.

Once the Federal Reserve stops buying assets, it could keep the holdings steady by reinvesting the proceeds of maturing securities into new ones, which should have an economically neutral effect. Alternatively, the Fed could allow its holdings to shrink by allowing bonds to mature or run off.  [The Fed would remit the proceeds of maturing bonds to the U.S. Treasury, thereby shrinking its balance sheet]

If the Fed allowed the securities in its $8.76 trillion asset portfolio to mature without reinvesting the proceeds, its holdings of Treasury securities would shrink relatively quickly—by about $2.5 trillion over three years.

When the Fed began the run-off process in late 2017, the economy was weaker than it is now: Inflation was below the Fed’s 2% target, and the unemployment rate was higher.

“The economy is so much stronger now, so much closer to full employment,” Mr. Powell said at a Dec. 15 news conference.”  This is just a different situation, and those differences should inform the decisions we make about the balance sheet at this time.”  [Note that at the current 3.9% unemployment rate, the U.S. economy has reached full employment.]

Curmudgeon Comment:  Shrinking the Fed’s bond portfolio faster or sooner could come as a surprise to most investors and speculators.  It represents a huge market risk that has yet to be discounted.

Interview with Louis Gave: If the Fed Tightens Too Much, They Will End up With an Equity Market Crash

The Fed will say they are worried about inflation, but deep down, all the policy settings were put in place to get this result. 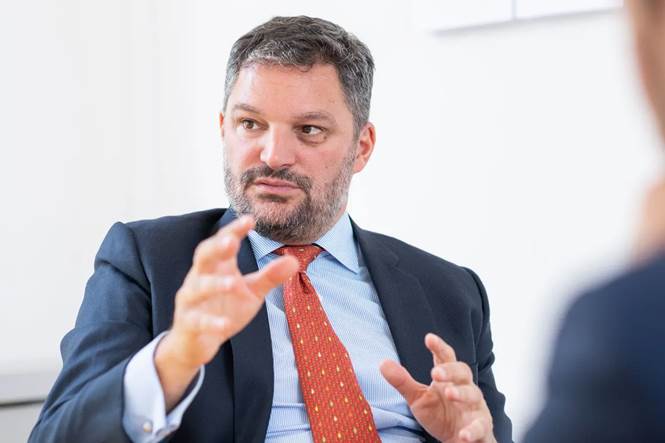 If the Fed tightens too much, they will end up with an equity market and a real estate crash. I think the Fed will try to continue on the side of always being late. And this is based on my core belief that today’s inflation rate is not a bug. It’s a feature. It’s what they want. It’s how you deal with an excessive amount of debt. So, they will say they are worried about inflation, but deep down, all the policy settings were put in place to get this result. It’s just like the 1950s and 1960s: You know, we came out of World War II with very high levels of debt to GDP, and we took care of it through 15 years of negative real rates. It’s the same plan this time around.

“Ethan Harris continues to believe the Fed is behind the curve and expects a total of eight rate hikes over the next two years. The Fed has taken notice and FOMC minutes revealed some members thought Quantitative Tightening (QT) could start soon after hikes. Our rates strategists expect QT to be announced at the September FOMC, though they suggest there is a chance it could happen by early summer.”

The Nasdaq Composite lost 4.5% in its worst week in more than 10 months, as rising yields hit shares of technology companies and other businesses that derive much of their value from profits expected further in the future. The tech heavy ARK Innovation ETF lost 11%.

A near-record number of tech stocks have plunged by some 50% in an echo of the dot-com crash.

Roughly four in every 10 companies on the Nasdaq Composite Index have seen their market values cut in half from their 52-week highs, while the majority of gauge members are mired in bear markets, according to Jason Goepfert, chief research officer at Sundial Capital Research (which publishes the excellent SentimenTrader newsletter.

“Whatever the fundamental and macro considerations, there is no doubt that investors have been selling first and trying to figure out the rest later,” Goepfert said in a note to subscribers.

At no other point since the bursting of the dot-com bubble have so many companies fallen like this while the index itself was so close to a peak. 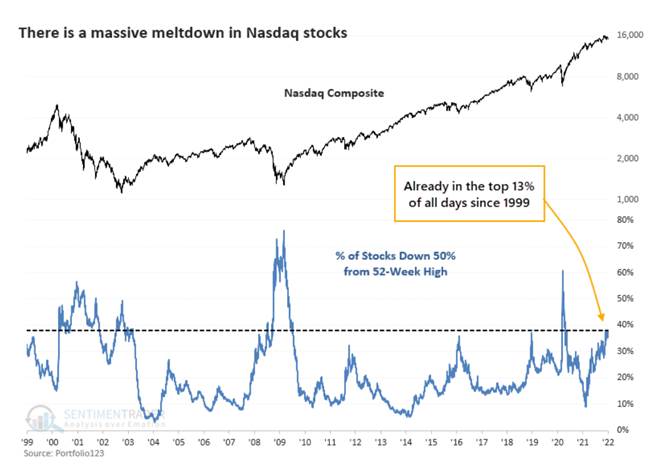 “Valuations are at historical highs, companies are raising billions based on fairy dust, and the Fed is signaling a tightening cycle,” Goepfert said. “All of these are scaring investors that we’re on the cusp of a repeat of 1999-2000.”

For investors looking back on the long bull market that commenced in March 2009, it may now feel like research is unnecessary, unrewarded, and more likely to reduce than enhance returns.  The free cash flow yield of the S&P 500 excluding financials is 3.4%—the lowest level since 2002.Considering inflation, real free cash flow yields are negative and have never been lower. 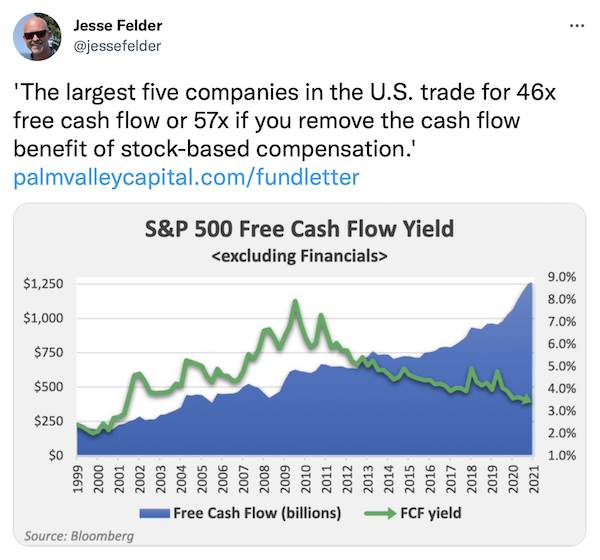 The market feels like a bubble. Does it matter?  Evidently not, to new investors.   Between NFTs, crypto, and GameStop, AMC, and other meme stocks, money has rarely felt more fake. Or, at the very least, value has rarely felt so disconnected from reality. 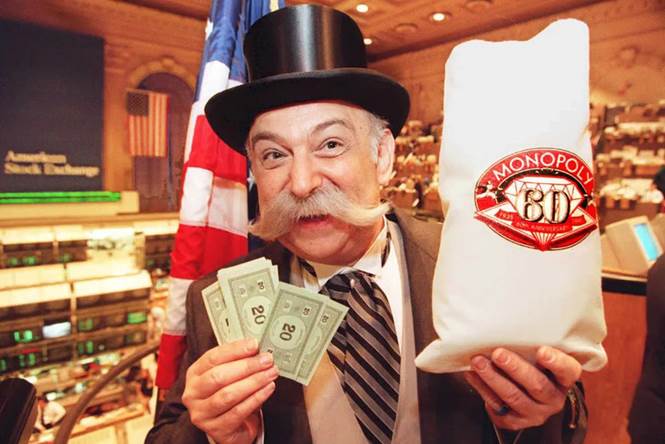 Rich Uncle Pennybags, the Monopoly game figure, shows some of his “funny money” as he prepares to strike the opening bell at the American Stock Exchange in New York in February 1995. Bob Stron/AFP via Getty Images

The concept of value is a fuzzy one, and valuation is often more art than it is science. Psychology has always played a role in money and investing — and there have always been bubbles, too, where the price of an asset takes off at a rapid pace and disconnects from the fundamental value. As Jacob Goldstein wrote in Money: The True Story of a Made-Up Thing, all money is sort of a collective myth. “Money feels cold and mathematical and outside the realm of fuzzy human relationships. It isn’t,” he wrote. “Money is a made-up thing, a shared fiction. Money is fundamentally, unalterably social.”

If and when the bubble around some of these hyped investments bursts, a lot of people are going to get hurt and lose money. In NFTs, evidence suggests those who are already wealthy and powerful are the ones ruling the roost, just like in the stock market.

While there are true believers in crypto projects, so much of it is just speculation, and venture capitalists and hedge funds are more likely to win the speculation game than the little guys caught up in the mania.

Blue chip indexes appear to have topped in the first three trading days of January 2022. The Dow Jones Industrial Average and the NYSE Composite index each made a daily closing high on January 4 and an intra-day high on January 5 (at 36,952.65).

For cyclical reasons detailed in the June 2021 issue, I think 2022-2024 will witness the biggest bear market ever recorded.