The Bureau of Labor Statistics (BLS) reported on Friday that "the all-items Consumer Price Index (CPI) rose 6.8% for the 12 months ending November, the largest 12-month increase since the period ending June 1982.”

The spike in consumer prices could spell trouble for officials at the Federal Reserve and the White House, who are trying to calibrate policy at a moment when the labor market has yet to completely recover from the pandemic, but price increases are proving more persistent than policymakers had expected (Thank goodness that the term “transitory” inflation has been retired).

We take a close look at actual vs reported inflation and the new CPI adjustments starting next month.  There’s pressure on the Fed and the Biden administration to act.  Will they?

Finally, Victor weighs in with his thoughts on this troublesome topic along with his market comments. 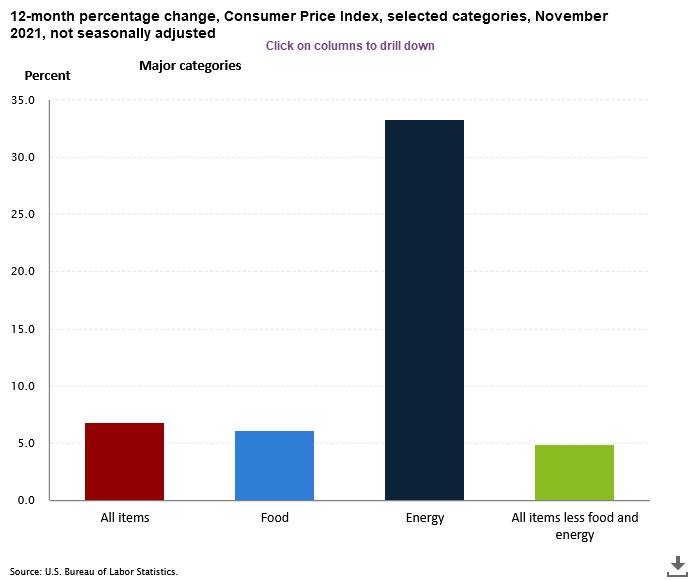 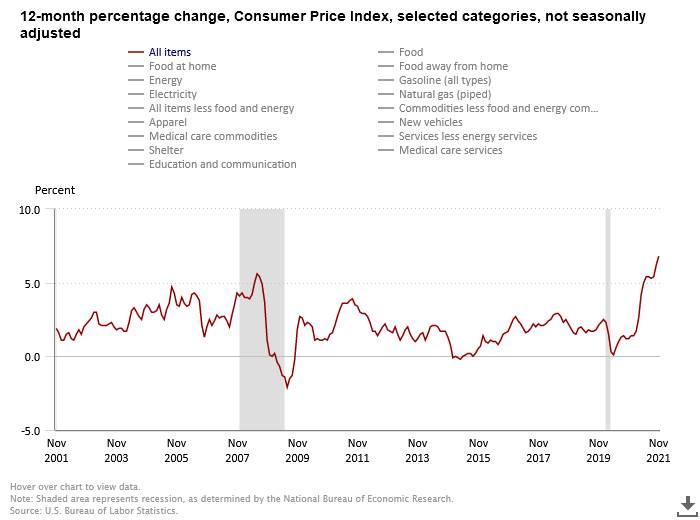 In reality, the CPI is much higher than reported by the BLS.  For example, the CPI calculation was changed in 1987 to substitute rent for house price inflation.  Home price pressures have been swept in the purposefully nebulous Owner-Equivalent Rent.  Furthermore, the reflected rent prices may be out of date, because the BLS CPI Housing survey collects rent data from each sampled unit every six months.

If today's CPI included house prices in its measurement, that would surely push the headline CPI (and core CPI) to double-digit gains.

ShadowStats’ John Williams had this to say:

Worst Inflation Since Harry Truman Was President -- Consistent with the Methodologies of Pre-1980 Headline CPI Reporting, the November 2021 ShadowStats Alternate CPI Annual Inflation at 14.9% Was the Worst CPI Reading Since 17.6% in June 1947, Just Topping the 14.8% Peak of March 1980.

The gap between real inflation and the reported CPI will surely widen in coming months.  That’s because the BLS will adjust the weights in its Consumer Price Index basket starting next month.  No details were provided other than this statement:

“Starting in January 2022, weights for the Consumer Price Index will be calculated based on consumer expenditure data from 2019-2020. The BLS considered interventions but decided to maintain normal procedures.”

We bet dollars to donuts that post-revision reported inflation will decrease, because of the yet to be disclosed “adjustments."

A chronology of historical CPI calculation changes can be found here.

Fed officials have become increasingly concerned about inflation, both because the uptick has lasted much longer than expected and because it shows signs of broadening to areas less affected by the pandemic.  That raises the risk that rapid price gains could become entrenched and create an “inflationary psychology” that will be difficult to reverse.

As costs rise across a wider array of goods and services, the Fed is growing more worried.  In past years, they would’ve stopped QE and raised rates months ago.

“Generally, the higher prices we’re seeing are related to the supply-and-demand imbalances that can be traced directly back to the pandemic and the reopening of the economy, but it’s also the case that price increases have spread much more broadly in the recent few months,” Fed chairman Jerome Powell, said during congressional testimony late last month. “I think the risk of higher inflation has increased.”

Economists expect the Fed to announce a plan to slow down its monthly bond purchases so that the latest QE program ends sooner than it originally planned.  Fed officials have been clear that they would prefer to finish buying bonds before raising short term (Fed funds) interest rates, which are set near zero, so that their policy tools are not working against one another.

Alan Detmeister, a senior economist at UBS and former chief of the wages and prices division at the Fed Board in Washington, thinks the Fed will accelerate their reduction of bond purchases.  “It seems pretty clear that they’re going to speed up the taper,” he said.

In the 1960s, the U.S. central bank failed to take decisive action to tamp down rising prices. Inflation soared, rising to double-digit levels during the 1970s, and Paul Volcker, then the Fed chair, pushed interest rates up sharply to get inflation under control in the early 1980s.  The hit to demand caused a painful recession before it brought price gains to single digit levels. That mistake, and its aftermath, has haunted central bankers ever since.

Yet the Fed seem to be more interested in keeping stocks and other asset prices up (via QE and ZIRP induced liquidity) than in taming inflation.

Inflation is also a political liability for the White House, because it’s making day-to-day life more difficult for many Americans, especially those (like the Curmudgeon) who rely on savings held in relatively low-risk investments like savings accounts or certificates of deposit. Those people are seeing the value of their holdings decrease and their future purchasing power decline sharply.

President Biden said in a statement on Friday:

“Today’s numbers reflect the pressures that economies around the world are facing as we emerge from a global pandemic — prices are rising.  But developments in the weeks after these data were collected last month show that price and cost increase are slowing (?), although not as quickly as we’d like.”

“Even with this progress, price increases continue to squeeze family budgets.  We are making progress (?) on pandemic related challenges to our supply chain which make it more expensive to get goods on shelves, and I expect more progress on that in the weeks ahead.”

Victor on the “new” CPI:

So instead of the Fed raising rates, the BLS will simply change the calculation of inflation to make it appear lower than it really is?

Instead of adjusting to the citizens’ desire for lower prices, the U.S. federal government tries to fool the people by changing the CPI metrics?

→ I don’t believe that trick will work.  The public will feel the bite of higher prices no matter how the BLS calculates the CPI.

1.  Things continue under an attempted cover-up of reality, which goes on longer than imaginable.

2.  The Fed does nothing but talk and threatens, while manufacturers hoard their production as inflation accelerates exponentially while the U.S. dollar crashes as hyperinflation begins.

3. The Fed stops lying and jawboning and ends QE, and then quickly raises the Fed funds rate.

→ It’s critically important for the Fed to decrease money supply growth to 6% annually. Note that Inflation was not stopped by raising rates in the 1970’s …it was stopped by Fed Chair Paul Volker cutting the growth of money supply in the 1980’s.

·        The S&P 500 Index currently has a real earnings yield of -2.9%, meaning that without continued growth in company earnings, investors would lose 2.9% when adjusted for inflation, B of A strategists led by Savita Subramanian wrote in a note on Wednesday. “The last time the real earnings yield was this negative was 1947.” 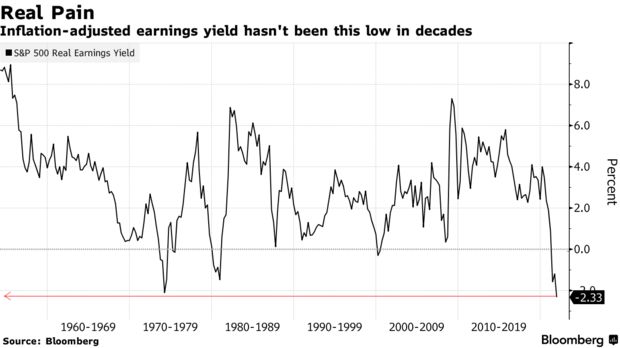 The Fed meets along with most of the world’s central banks will meet next week.  In the must read article, “Twenty Central Banks Hold Meetings as Inflation Forces Split,” Bloomberg says that the Fed will confirm a quicker withdrawal of stimulus than planned just a month ago. Fed chair Powell might even hint at being open to raising interest rates sooner than expected in 2022 if inflation persists. 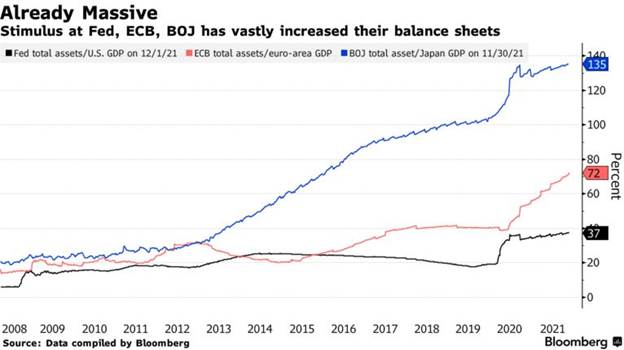 Perhaps this insight by a world class money manager is sobering:

“The object is to recognize the trend whose premise is FALSE; ride that trend and step off before it’s discredited.”         George Soros