Notes and quotes this week.  Enjoy!

Investors have poured almost $900 billion into equity exchange-traded and long-only funds in 2021 - exceeding the combined total from the past 19 years - according to analysts at Bank of America Corp. and EPFR Global.   The amount of money moving into the stock market dwarfed anything else this year. Bond funds attracted just $496 billion and money market funds received about $260 billion.

It’s a data point that underscores just how extraordinary and record-breaking this year has been. The combination of cheap money and an economy roaring out of the pandemic set the stage of an unstoppable rally, with frenzied retail trading and a lack of other good investment options adding fuel to the fire. 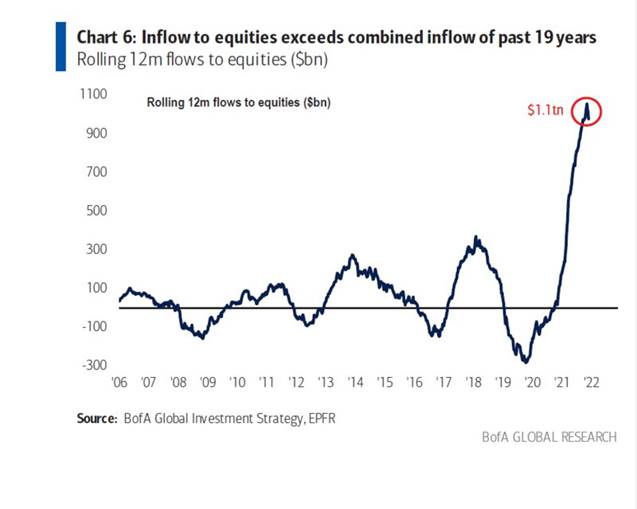 The rally has left U.S. stocks teetering at record valuations and even some Wall Street analysts, usually a bullish cohort, are turning bearish for next year. For investors, the debate continues to be about how fast central banks will raise rates to combat sticky inflation, and how badly it could potentially erode economic growth.

B of A Global Research:  Annual inflows to active equity funds since 2013 -Flows into actively managed global equity funds ($bn):

Friday’s global retreat from riskier assets exposes a vulnerability of the broad market advance of the past year and a half: the rising use of leverage or borrowed money.

Borrowings against portfolios of stocks and bonds, broadly called margin debt, have grown as individual investors have become major players in the stock market. So too have concerns that debt-fueled buying could be a sign of overexuberance, setting the stage for tumultuous trading periods such as Friday’s, when the Dow Industrials posted their largest-ever Black Friday decline and the U.S. oil price dropped 13%.

Investors who have borrowed heavily to fund investments in a rising market are more sensitive to such reversals, analysts and portfolio managers said. At the same time, the Covid-19 pandemic has made investors more vigilant about reducing risk whenever clear threats emerge and piling into Treasury’s, which posted one of their strongest rallies during the pandemic era on Friday.

Margin borrowings in October were up 42% from a year earlier to $935.9 billion, according to data from the Financial Industry Regulatory Authority, Wall Street’s self-regulator. Meanwhile a measure of cash holdings among individual investors fell to 46% of margin balances, said Sentiment Trader’s Jason Goepfert.  That’s the lowest reading in data going back to 1997.

Allianz SE’s Mohamed El-Erian urged the Federal Reserve to acknowledge that inflation isn’t transitory and “ease your foot off the accelerator starting now.”

“I think it’s time for a change in policy at the Fed,” he said. “I was of the view that this may be easier with someone who hasn’t repeated over and over again that inflation is transitory.  Inflation is not transitory and it’s really important for the Fed to realize this,” he added.

El-Erian has repeatedly said the Fed is underestimating inflation risks as the U.S. economic recovery from last year’s pandemic shock accelerates price increases for everything from energy and food to consumer items.

The transitory inflation debate in the United States is over. The upsurge in US inflation has turned into something far worse than the Federal Reserve expected. Perpetually optimistic financial markets are taking this largely in stride. The Fed is widely presumed to have both the wisdom and the firepower to keep underlying inflation in check. That remains to be seen.

With inflationary pressures now going from transitory to pervasive, the policy rate should be the first line of defense, not the final shoe to drop. In real (inflation-adjusted) terms, the federal funds rate, currently at -6%, is deeper in negative territory than it was at the lows of the mid-1970s (-5% in February 1975), when monetary-policy blunders set the stage for the Great Inflation. Today’s Fed is woefully behind the curve.

My advice to the Federal Open Market Committee: It is time to up the ante on creative thinking. With inflation surging, stop defending a bad forecast, and forget about tinkering with the balance sheet. Get on with the heavy lifting of raising interest rates before it is too late. Independent central bankers can well afford to ignore the predictable political backlash. I only wish the rest of us could do the same.

Tweet by Cundill Capital about Bubbles and Value Investing

Seth Klarman and Stan Druckenmiller on bubbles and value investing: 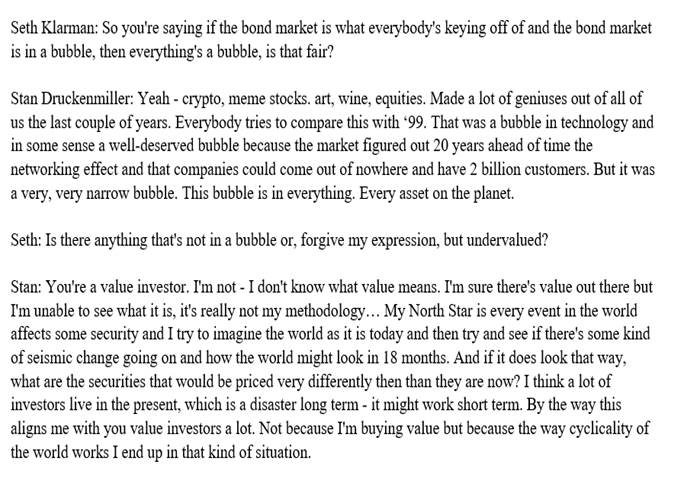 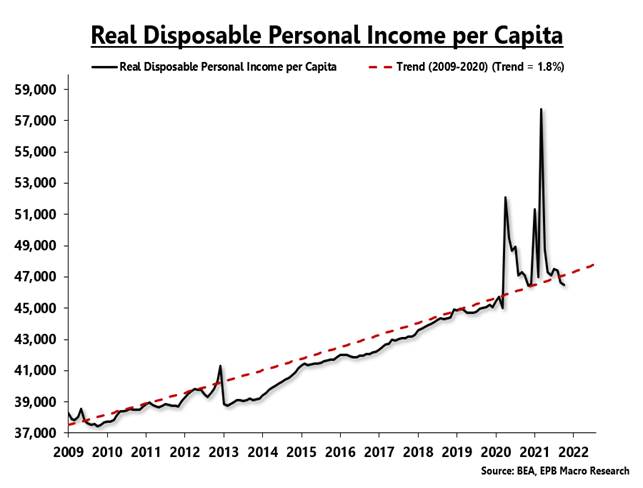 Nonfarm payrolls growth, the most lagging of the four coincident indicators, remains steady at 4.8%, down from a peak of 5.6% in April.

Real consumption growth has fallen from 15.5% in March to 6.2% in September when judged on a smoothed six-month annualized basis. 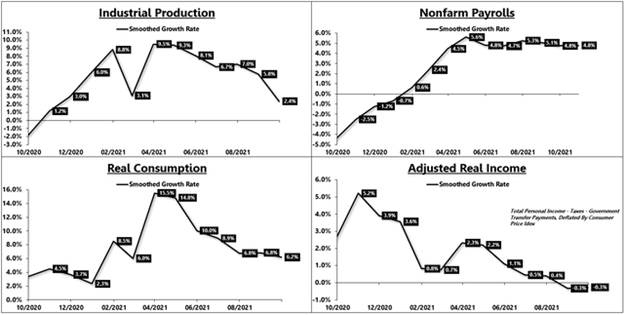 Across four decades of work in the financial markets, and over a century of historical data, I’ve never observed as many historical indications of a market peak occurring simultaneously. Noise reduction is always a process of drawing a common signal from multiple, partially correlated sensors, even if each individual sensor might be imperfect. The reason that we follow boatloads of these syndromes is the same reason we base our gauge of market internals on thousands of securities – uniformity conveys information.

Emphatically – and this is important – my intent here is not to “call the top” of this bubble. Yes, this is a bubble in my view. Yes, I believe it will end in tears. Yes, the price investors pay for a given stream of future cash flows is inseparable from the long-term returns they can expect. Yes, if this bubble is ever to have a top, this would be a perfectly reasonable moment to expect one. 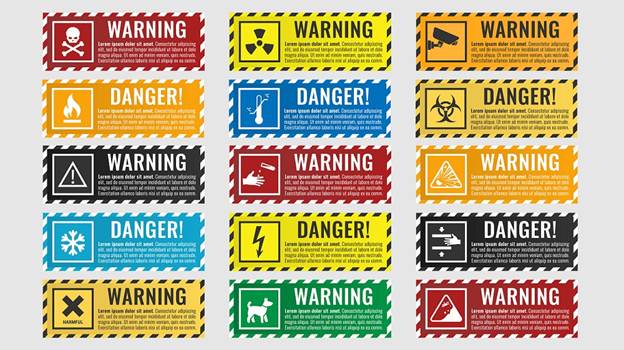