Why are Gold and Silver Lagging Inflation?

For decades, gold and to a lesser extent silver, were seen as the best inflation hedges.  As inflation has surged this year, the precious metals have not kept pace.  Part of the reason is gold’s correlation with stocks and interest rates which Victor explains in this article. The Curmudgeon has a somewhat more sanguine outlook for the yellow metal.

Happy Thanksgiving to all U.S readers!

When stocks go up gold generally does not. Why?  Stocks are now perceived to be a better inflation hedge.  Companies often raise prices on goods and services they sell when inflation is increasing.  Most stocks also pay a dividend, but gold does not.   Add manipulation by banks, which have sold gold and bought stocks over the past ten or more years.

This correlation clearly shows that investors have preferred stocks to gold for the last 10 years- a period of ultra-low interest rates.

“Gold is really not a perfect hedge,” said Arnott, who analyzed the returns of various asset classes during periods of above-average inflation. 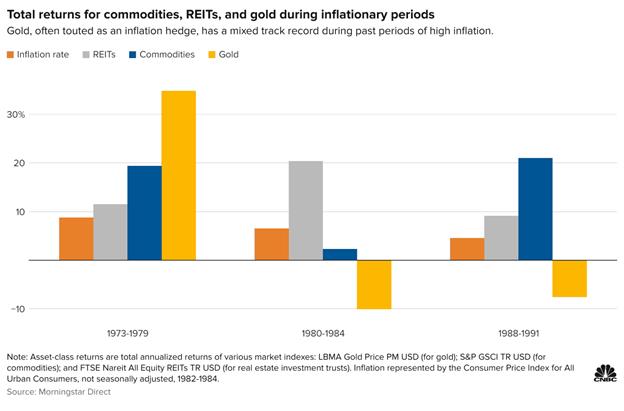 If the 1973 -1976 period would repeat, then as inflation accelerates interest rates would increase, the U.S. dollar would decline, and gold prices would rise substantially.

GraniteShares founder and CEO Will Rhind told CNBC earlier this month: “We have real inflationary pressures that, the longer they persist, the more of a problem that causes, and the more people will look for inflation hedges.  There just aren’t that many places to hide and gold is one of those places that people have always gone to in times of stress, and I think this data’s a reason for still believing that gold is going to be there next year if there’s an official acknowledgment that inflation is a (real) problem.”

Gold will continue to lag inflation until interest rates rise significantly and the S&P 500 starts to decline. Note also that when the Fed raises rates in small increments, stocks continue to advance.

The tipping point comes when both short- and long-term interest rates rise enough to offer stiff competition for stocks. At that time, money will move from stocks to gold and the yellow metal will once again be deemed the best inflation hedge.

My opinion is that “until” the Fed raises interest rates significantly, it is far better (all things being equal and relative) to own stocks rather than gold.

By keeping Jerome Powell as the Fed chairman, while elevating progressive favorite Lael Brainard to vice chair, President Biden may think he’s deftly straddled the Democratic politics. Instead, he is buying their monetary policy and inflation.

Neither deserves reappointment on their record of the last four years (we completely agree!), as inflation has risen three times above the Fed’s 2% mandate to the highest rate in 30 years.

The Fed has maintained the loosest monetary policy in history despite strong economic growth and a 4.6% jobless rate. Real interest rates are still negative, and Mr. Powell has given no public indication of having second thoughts.

In anointing the duo, Mr. Biden will now own future inflation. Perhaps there’s rough justice to having Mr. Powell stick around to fix the problem, but only if he does fix it. One lesson of the long fandango over his reappointment is that Washington and Wall Street will apply intense pressure to keep the easy money running as long as possible.

A vote in the Senate to confirm Powell is also a vote for the inflation status quo. Mr. Biden has concluded that this is a good political gamble, but Republicans can take the opportunity to distance themselves from the failing economic policies on which voters have soured so rapidly.

The current spike in inflation is no accident. It's the result of reckless policies that squeeze the supply of goods and services—notably energy.