Is Risk a Thing of the Past? Markets Don't Grow Old if They're Manipulated!

Quick takes this week followed by Victor's quotes from 1992 and November 19,  2021.  Stay tuned for a post expressing Victor's opinion on why gold and silver have lagged surging inflation.  Enjoy!

Again, comments, concerns, opinions are welcome. Email the Curmudgeon at ajwdct@gmail.com.  Thanks.

WSJ: How the Fed Rigs the Bond Market

Inflation hasn’t been this high relative to Treasury bond yields since the 1970s. Then as now, real bond yields—the gap between the 10-year Treasury and inflation—signaled distress for policy makers and market participants.

Since 1970, negative real Treasury bond yields typically have corresponded with a plunging stock market. Example: Yields reached a low of negative 4.9% in 1974. During that year, the S&P 500 fell 37%. Today, real yields of negative 4.7% are the second-lowest since 1970, yet the S&P 500 has risen nearly 30% over the past year.  What is different today?

First, the U.S. Treasury bond market has been rigged and manipulated (see End Quote below) since the Federal Reserve’s second quantitative-easing program began in 2010. Since then, Fed purchases of Treasury debt have funded as much as 60% to 80% of the entire government borrowing requirement. In other words, Fed actions have crowded out private-sector price discovery for more than 10 years, pushing yields to lows and stock prices to record highs. The consequence of this blurred line between Fed and Treasury responsibilities—“monetizing the debt”—is inflation.

Second, the infamous bond vigilantes, who sold bonds to protest inflationary policies, are relics of the past. They were driven by opportunity, not ideology. These investors voted on government budget deficits and debt management by buying or selling bonds every day. But active Fed intervention has silenced them. “Fighting the Fed” has always been fraught with risk, but fighting a Fed operating with such force will result only in big and consistent losses.

WSJ: Tweedledum and Tweedledee at the Fed- Powell and Brainard have both presided over the inflation breakout.

Neither one deserves the job if you judge them by how well they have performed in their main duty of maintaining price stability. The Powell Fed has presided over inflation that it failed to predict and has been slow to address. The Fed’s professed inflation target is 2%, but the consumer price index rose 6.2% in October above a year earlier.

By any measure this is an historic failure. Mr. Powell’s credibility has been damaged with his persistent refrain, until recently, that inflation is “transitory.” His new monetary policy framework of average-inflation targeting, unveiled in August 2020, has been a bust.

If Mr. Biden wants to distance himself from this inflation failure, he’d nominate a critic of current Fed policy (Curmudgeon: that would be a smart choice).

If the choice is Tweedledum or Tweedledee (Powell vs. Brainard), Mr. Biden should understand that he is embracing their monetary policy as his own. He’ll own inflation even more than he already does.

Goldman CEO David Solomon, speaking at the Bloomberg New Economy Forum in Singapore, said “greed has far outpaced fear” in markets and investors could face a rocky period as the global economy emerges from the pandemic.

“When I step back and think about my 40-year career, there have been periods of time when greed has far outpaced fear -- we are in one of those periods,” Solomon said in an interview at the Bloomberg New Economy Forum in Singapore. “My experience says those periods aren’t long lived. Something will rebalance it and bring a little bit more perspective.”

“Chances are interest rates will move up, and if interest rates move up that in of itself will take some of the exuberance out of certain markets,” Solomon said.

“Concerns particularly relate to pockets of exuberance in credit, asset and housing markets, as well as higher debt levels in the corporate and public sectors as a legacy of the pandemic,” it said Wednesday in its Financial Stability Review, echoing former Federal Reserve Chairman Alan Greenspan’s description of the dot-com bubble in the 1990s. 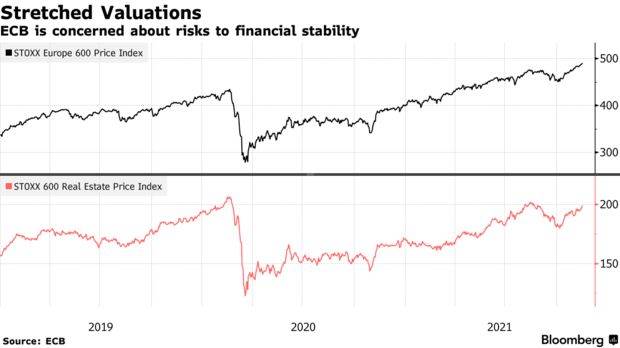 ECB said that the real estate market is “more prone to a correction,” while also warning that investment funds, insurers and pension funds could face “substantial credit losses” if their exposure to lower-rated corporate debt sours.

“The markets for equity and risky assets have maintained their striking buoyancy, making them more susceptible to corrections,” ECB Vice President Luis de Guindos said in the report. “There have been examples of established market players exploring more novel and more exotic investments. In parallel, euro-area housing markets have expanded rapidly, with little indication that lending standards are tightening in response.”

Pockets of Exuberance- Here are some of the risks the ECB sees for financial stability:

“The pandemic continues to be one of the main risks to economic growth,” the ECB said.  Beyond Europe, uncertainties include a slowdown in China, even if problems experienced by indebted property developer China Evergrande Group have only had limited effects on the outlook so far, according to the report.

“If persistent bottlenecks feed through into higher-than-anticipated wage rises or the economy returns more quickly to full capacity, price pressures could become stronger,” the ECB said. “A more-persistent high-inflation scenario could translate into an untimely tightening of financial conditions, weighing on the economic recovery.”

“A correction in markets could be triggered by a weaker than expected economic recovery, spillovers from adverse developments in emerging market economies, a re-intensification of stress in the non-financial corporate sector or abrupt adjustments in market expectations regarding the prospective path of monetary policy normalisation,” it said. Eurozone inflation rose to a 13-year high of 4.1% in October, well above the ECB’s 2% target. The central bank, however, has predicted inflation will fall back below its target in the next few years and said it did not expect to raise rates next year.

Curmudgeon Comment: It's somewhat disingenuous for the ECB to warn of asset bubbles it has directly fueled with its egregious, easy monetary policy.

The chart below shows the ratio of trading volumes of leveraged long vs leveraged short US equity ETFs. It’s basically a sentiment indicator where spikes indicate excessive risk taking on the long side. 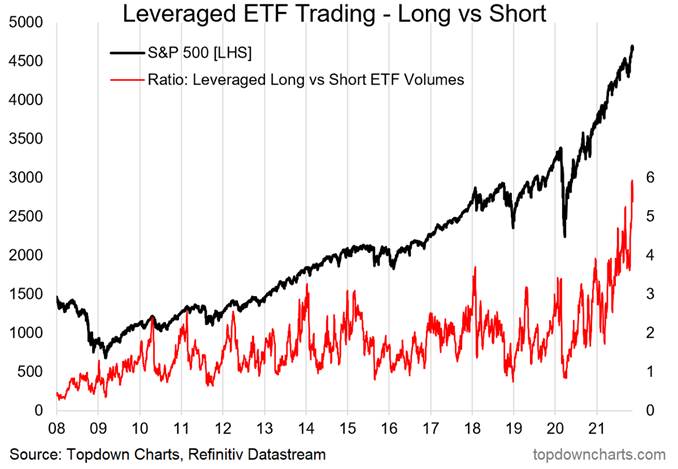 Global initial public offerings have smashed their previous record this year, propelled by a blank-check boom and companies cashing in on high valuations.

With six weeks to go, about 2,850 businesses and special purpose acquisition companies (SPACs) have raised more than $600 billion in IPOs, leaving the records for both deal count and proceeds reached in 2007 in the dust, according to data compiled by Bloomberg. 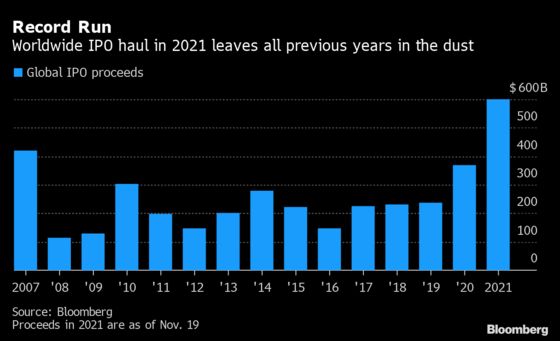 These companies took advantage of record-high stock prices, as central bank support kept investors flush with cash. And the economic recovery from the pandemic along with stimulus measures helped boost corporate earnings.

A retail-buying frenzy that sent stock markets on a rollercoaster ride this year, along with investor appetite for hot sectors has fueled some dizzying post-listing pops. Rivian, which has yet to generate revenue, more than doubled in its first few sessions, briefly surpassing Volkswagen AG in market value, while Korea’s SK Bioscience Co. surged 160% in its debut.

These outsized gains have fanned worries of a bubble. The S&P 500 Index is trading at more than 21 times projected earnings in the next year (we don’t believe in forward earnings estimates because they are almost always overstated), well above its 10-year average. Stocks are near their most expensive level since the dot-com bubble of 2000 (by some measures stocks are MORE expensive than the dot-com bubble peak).

“As monetary stimulus programs are scaled back, and if global growth slows sharply, markets could be heading for a correction,” said Susannah Streeter, senior analyst at Hargreaves Lansdown Plc. “Over-valued companies will feel the pain much faster than others.”

A simple question right now that’s on everyone’s mind is: are stocks in a bubble? And it’s really a complicated question. This is going to sound unusual, but I can make the statement that at the same time, stocks are both as expensive as they’ve ever been and as cheap as they’ve ever been. So how do I get to that statement? If I look at the price-earnings ratio on the S&P 500, it’s in the 99th percentile compared to the last 30 years. But if you think stocks are expensive, have you looked at bonds recently?

Curmudgeon Comment: Comparing one bubble (stocks) to another (bonds) is a fools game. Why not compare TSLA stock to bitcoin?  Or IPOs to SPACs? Or Meme Stocks to Home Flipping?

"Market price movements are like people – they have statistically significant life-expectancy profiles. In a market that is in a stage of old age, it is particularly important to be attuned to symptoms of a potential end to the current trend."

"Trading the market without knowing what stage it is in is like selling life insurance to twenty-year-olds and eighty-year-olds at the same premium."

Above quotes from "Victor Sperandeo: Markets Grow Old Too" interview by Jack Schwager in New Market Wizards, orignially pulbished in 1992.

"There are no markets (anymore); only manipulation."  Email to Curmudgeon on 19 November 2021.