Consumer prices rose at the fastest pace in 30 years in September while workers saw their biggest compensation boosts in at least 20 years, according to new government data released Friday.

In this week’s column, we take a closer look at BLS reported inflation vs an alternate inflation gauge.  Then we examine who’s buying oil futures and the much-improved energy stock sector.  Finally, we look at the gold to U.S. government debt ratio to get a clue to the yellow metal’s future prices.

WSJ - Price and Wages Increase at a Rapid Pace:

U.S. government reports on Friday point to an economic recovery (?) caught between robust consumer demand and severe supply shortages, leading to a rapid uptick in inflation.  Persistently high inflation could offset the increase in wages and make households worse off.

It could also force the central bank to raise interest rates to keep prices in check. Such a move also risks slowing the U.S. economic recovery when the unemployment rate remains higher than it was before the pandemic.

The Fed’s preferred inflation gauge, the personal-consumption- expenditures price index, rose 4.4% in September from the previous year, the fastest pace since 1991, the Commerce Department said Friday. The index was up 0.3% in September from the previous month.  Excluding food and energy categories, which tend to be more volatile, the index rose 0.2% over the month and 3.6% over the year.

An index of consumer sentiment also released Friday by the University of Michigan showed Americans remain in a glum mood. The index fell to 71.7 in October from 72.8 in September. It remains well below the level of 101 registered in February 2020, before the pandemic hit.  John Williams (see ShadowStats below) says, “University of Michigan’s October Consumer Sentiment Continued to Hold Near Its New Pandemic Trough.”

Consumers in October also anticipated the highest year-ahead inflation rate since 2008 at 4.8%, according to the sentiment survey. Higher consumer inflation expectations are a concern for policy makers because they could prompt firms and workers to raise prices and salary demands in the future, making the expectations self-fulfilling.

Shortages throughout the supply chains on which corporate America depends are translating into widespread inflationary pressure, a string of US companies revealed this week, disrupting their operations and forcing them to raise prices for their customers.

Whirlpool on Friday blamed “inefficiencies across the supply chain” for “pretty brutal” increases in prices for steel, resin and other materials, saying these would add almost $1bn to the appliance manufacturer’s costs this year.

“On any given day, something is out of stock in the store,” said Vivek Sankaran, chief executive of Albertsons, likening the grocery chain’s efforts to respond to successive challenges to a game of Whac-A-Mole.

Asked this week which ingredients and supplies Chipotle had found difficulty securing, Jack Hartung, the restaurant chain’s chief financial officer replied: “All of them.”

Pressure on every link in the supply chain, from factory closures triggered by Covid-19 outbreaks to trouble finding enough staff to unload trucks, is rippling across sectors, intensifying questions about the threat that inflation poses to robust consumer spending and rebounding corporate earnings.  In recent days the largest US airlines have all complained about the surging costs of jet fuel, toy manufacturer Mattel has spelled out the challenge of higher resin prices and Danaher has joined the list of manufacturers struggling to source electronic components.

On Wednesday the Federal Reserve’s Beige Book summary of economic conditions reported that supply chain bottlenecks and labor shortages had slowed the pace of economic growth in much of the country. “Most districts reported significantly elevated prices, fueled by rising demand for goods and raw materials,” it noted.

Annual inflation is climbing at the fastest pace in three decades in the United States, keeping pressure on the Federal Reserve and the White House as they try to calibrate policy during a tumultuous period marked by widespread supply shortages, solid consumer demand and quickly rising wages.

Prices climbed by 4.4% in the year through September, according to the Personal Consumption Expenditures price index data released Friday. That beats out recent months to become the fastest pace of increase since 1991.

The current pace of inflation has become an uncomfortable political problem for President Biden and has created a delicate balancing act for the Fed, which is still trying to coax the labor market back to full strength. Employers may be struggling to fill jobs today and raising pay to compete for workers, but that seemingly tight labor market belies a more complicated reality. Many would-be employees remain on the labor market’s sidelines, likely because of concerns about the virus and child-care issues, and policymakers want to make sure that the economy is strong, and jobs are available when they are ready to return.

Irrespective of GDP Reporting Gimmicks, Real Third-Quarter 2021 Economic Activity Is Turning Down Anew as the Inflation Surge Continues. Third Quarter ShadowsStats Corrected GDP Contracted by 0.05% (-0.05%).   Amidst surging inflation, the “advance” estimate of Third-Quarter 2021 Gross Domestic Product softened to an inflation-adjusted annualized “real” growth of 2.02%, down from 6.73% in Second-Quarter 2021, yet all that GDP “growth” was in inventory buildup, not in sales (Bureau of Economic Analysis – BEA). 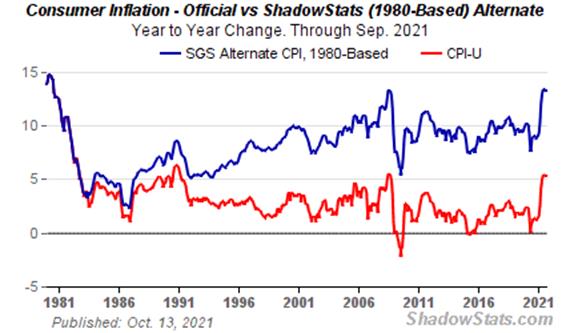 Fund managers like Luc Filip, head of investments at SYZ Private Banking in Switzerland, are contributing to a rally that has pushed oil prices to their highest level since the 2014 energy bust. While energy-futures markets are more typically the province of producers and commodities-focused hedge funds, an oil rally that shows no signs of slowing is now exerting a pull on traditional money managers who run portfolios of stocks and bonds.

Because commodities prices tend to rise alongside inflation, they can protect investment portfolios against its erosive effects. When combined with other commodities like copper and gold, energy is “quite a decent hedge,” said Mr. Filip, who has been buying energy futures and selling longer-dated bonds that will lose value if inflation turns out to be high for longer than expected.

Traders and analysts say that some of the recent oil gains could be explained by inflation worries, especially on days with no news about supply that might drive trading by the usual players such as commodities brokers and oil producers.

Unlike other sectors, energy's correlation to inflation is consistent. This shows the rolling five-year correlation between year-over-year sector returns and the year-over-year change in the CPI. Energy is the winner in the structural inflation-hedge department. 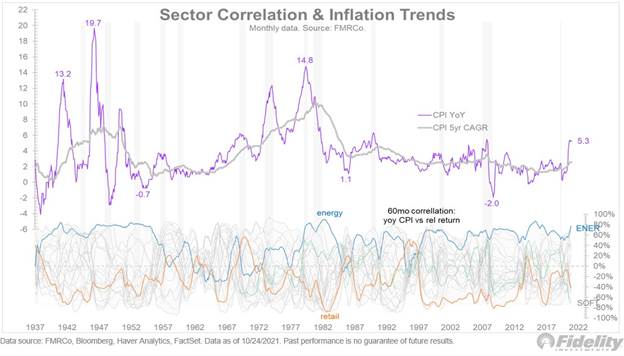 The energy sector is moving up!  It’s remarkable how the energy earnings estimates have been upgraded so dramatically. 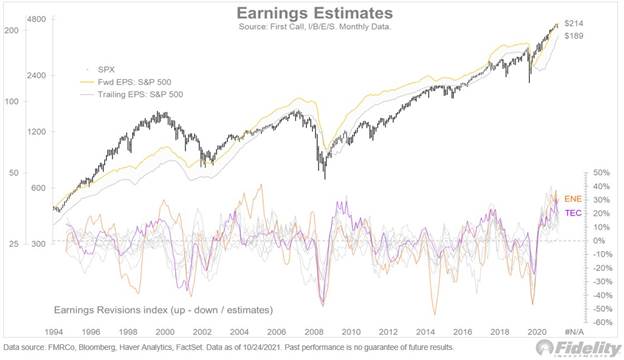 Peter Thiel said Sunday at the second National Conservatism Conference that the high price of Bitcoin indicates the economy is facing real inflation.

The tech billionaire said price rises aren’t transitory and criticized the Federal Reserve for not addressing inflation and failing to recognize its seriousness.

The Fed isn’t even acknowledging the problem, Thiel said, and is guilty of embracing the theory that it could print money without triggering inflation. He said the Fed is in a state of “epistemic closure,” a philosophical term that means close-mindedness.

Gold fell more than 1% toward the $1,775 a troy ounce level on Friday, moving away from a 6-week high of $1,807 hit on October 25th, as the U.S. dollar index rebounded from a 1-month low and Treasury yields climbed higher. Among US data, personal spending beat market forecasts and core PCE inflation came in in line with expectations while the employment cost index rose at a record pace.

Elsewhere, the European Central Bank (ECB) pledged to continue with the pandemic-era asset purchases program until at least March 2022 and left its rate hike outlook unchanged, even as the Eurozone economy is faced with multi-year high inflation rates. Investors now look forward to the Federal Reserve interest rate decision next week for further guidance on policy outlook. 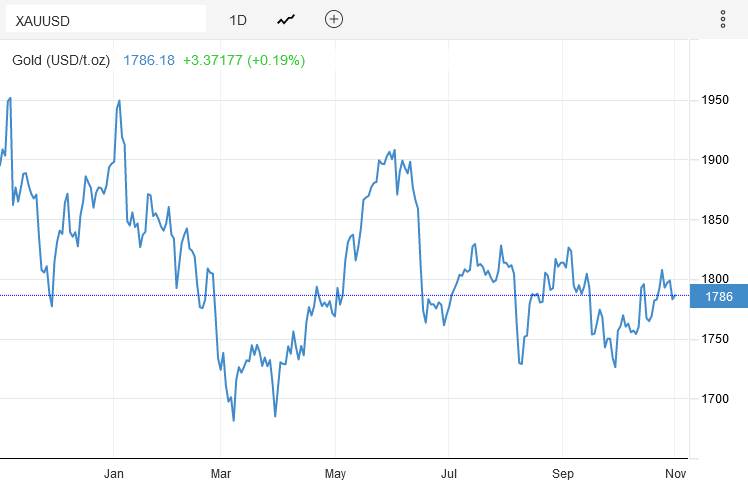 Where's the glitter? If both nominal yields and inflation breaks their rise from here, it may leave gold pretty much where it has been: going nowhere. Gold follows real rates, and real rates haven’t budged in over a year. 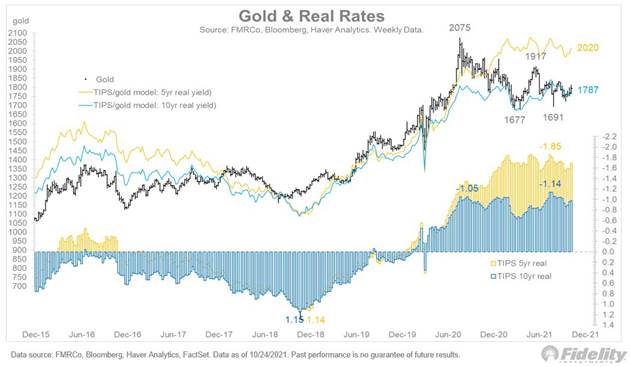 Interestingly, as the government has continued to pile on more and more debt, gold has underperformed.  Such a phenomenon is unsustainable in our view. 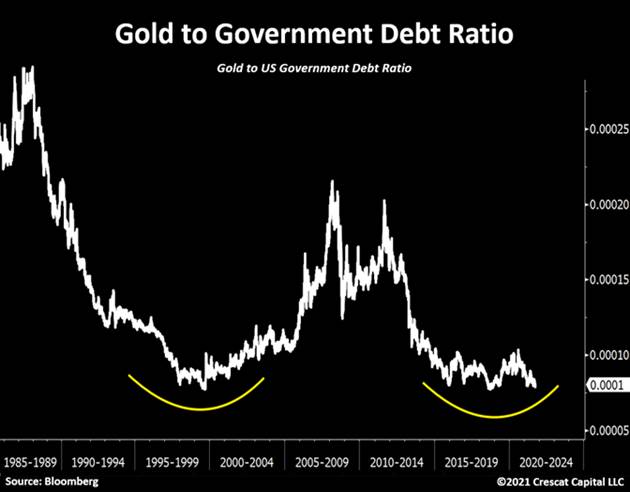 Today, the setup today looks just like it did in the early 2000s ahead of a 10-year precious metals bull market.

End Quote (repeated from last week as it’s so apropos):

Frederick Bastiat was a French economist, writer, and a prominent member of the French Liberal School.