Once again, we bring you the best from financial and economic thought leaders via commentaries and charts/tables.  Victor’s comments are inserted Enjoy!

WSJ Opinion - Does the Fed Have the Will to Fight Inflation? By  Jason De Sena Trennert [Please refer to Curmudgeon’s Conclusions below for additional clarity on this topic]

The Fed’s policy of quantitative easing (QE) injures middle-class savers. People without financial assets get kneecapped by the policy known as “financial repression”—purposefully attempting to pay for government spending by keeping interest rates below the rate of inflation. This policy has been a boon for the wealthy but a disaster for average people, who earn no return at all on their savings.

While the Fed has talked about slowing down the pace of its asset purchases (known colloquially as tapering), it is important to remember that it is still technically easing. This leads us to wonder whether the Fed can raise rates again without significant pain and major dislocations in the global economy.

The sheer size of financial assets today relative to the size of the economy suggests that the tail may be wagging the dog. Any significant decrease in the price of securities is likely to damage consumer confidence. A reported 56% of U.S. households hold common stocks either directly or through retirement accounts, and the correlation between confidence and stock prices has grown. Total financial assets in the U.S. now represent 565% of gross domestic product.

Victor says:  With the Biden administration’s $3+ Trillion spending program in the works, the Fed must print more dollars (QE) to buy the additional U.S. government debt that will result from increased deficit spending.

Bloomberg - Stagflation Fear Is Having a British Renaissance, by John Authers:

The “panic/euphoria” model, which I have followed quasi-religiously for longer than I care to contemplate, is the ultimate contrarian sentiment indicator. You should buy when the market is in panic and sell when it is euphoric. Here it is, with the levels of the “P/E” over time, and the subsequent 12-month performance by the equity market: 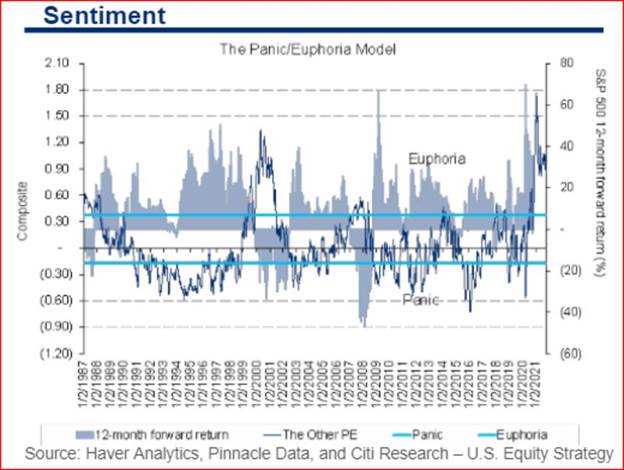 This was the verdict from last week’s Panic/Euphoria index, presumably written by a Citi Research analyst: “Panic/Euphoria declined but remained in euphoria territory this week and is generating a 96% historical probability of down markets in the next 12 months at current levels. This week’s Panic/Euphoria was 0.85 compared to an upwardly revised 0.91 in the prior week. Panic territory is defined as -0.17 and lower, while euphoria is 0.38 and higher…. Nasdaq Volume as % NYSE (though volatile), margin debt, gas prices, and put/call premiums all contributed to the elevated reading.”

Whether ironically or appropriately, this favored contrary indicator has been sending some of its most bearish signals ever in the last few months. This should be taken seriously.

Bespoke Commentary and Charts (via email): 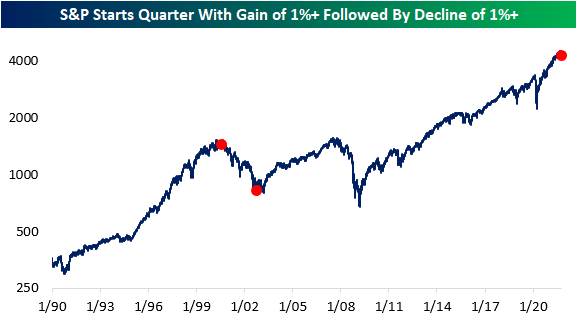 As of October 5th, the Energy sector was up 14% while the S&P was down over the prior 10 trading days. This is only the second time this has happened since 1990. The other occurrence was in March of this year.  With the Energy sector's weighting in the S&P 500 now below 3%, it can experience big moves without moving the broad market hardly at all. 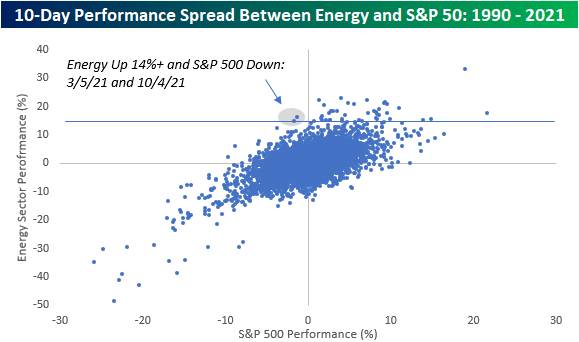 Oil and gas prices remain very elevated relative to where they started the year, and prices have continued to rise recently which is normally a time of year when prices begin their seasonal downtrend. 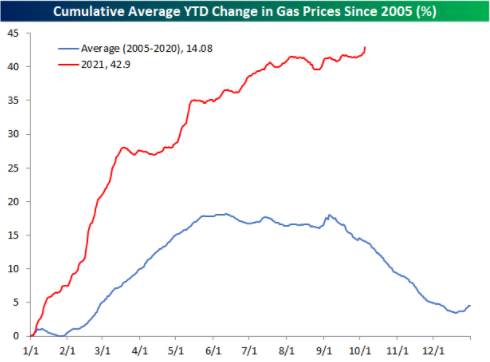 Victor says: Energy prices have been rising at an outstanding pace this year (+63.4% YTD as of October 8, 2021).  Of course, this was to be expected as the Biden Administration canceled the XL Pipeline in his first week in office along with federal leases for exploring and developing  natural gas.

B of A Global Research concurs: High energy prices are likely to stick, with upside risks in both the short and medium term.  They are part of a larger "inflation tax" that is slicing roughly 1.5% off real household incomes.

The energy price increase has been broad based. Oil, natural gas, and coal account for a large majority of the world's energy consumption. Of these, Dutch natural gas futures have seen the most dramatic spike as per this graph (courtesy of BoA Global Research):

The 2-year rolling return for the Bloomberg Commodity Spot Index recently crossed above the 50% level. If we use history as a guide, should we expect a new secular commodity bull market? The outlook suggests commodities have entered a new secular uptrend. 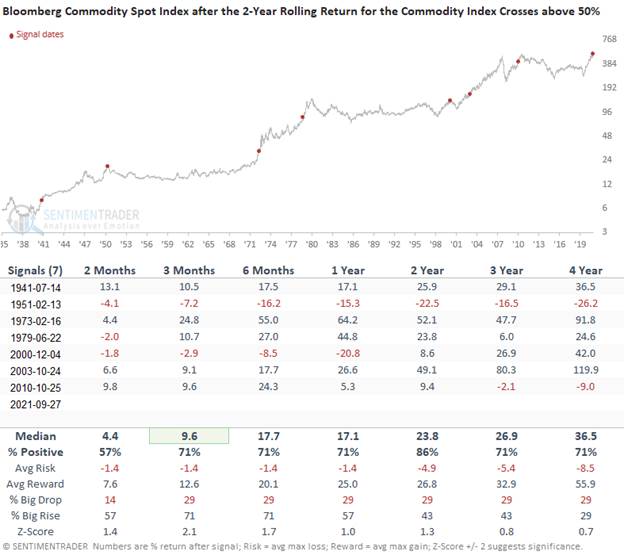 The following table provides the rolling returns for the S&P GSCI Commodity Spot Indexes. The current uptrend in commodities is an everything rally. Each component has a positive two and three-year rolling return, and only two maintain a negative one and five-year return.  The rank measures the current rolling return relative to all other values in history-100 highest to 0 lowest. 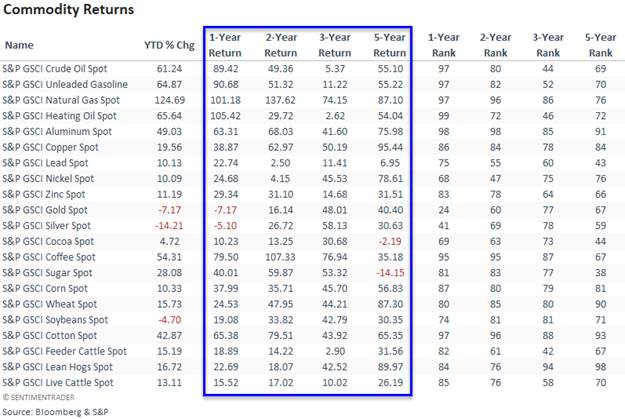 The weight-of-the-evidence is building to suggest that we should be mindful that the current uptrend in commodities may not be a cyclical phenomenon but rather a new secular trend.

If commodities are indeed in a new secular uptrend, the implications for portfolio positioning are at a critical juncture. Mind the opportunity.

Curmudgeon Says:  Any commodity bull market will be kept in check by a continued high in the U.S. dollar.  The DXY dollar index made a new 52 week high this past Wednesday, October 6th at 94.44.  It closed the week on Friday, October 8th down a few ticks at 94.10.

With the S&P 500 trading at 20x forward earnings (estimates are almost always too high), cash flows come at a price. The free-cash-flow (FCF) yield is now a mere 3.3%, with most of that going to dividends (1.3%) and buybacks (1.5%). Remember, FCF is after capex and before dividends. 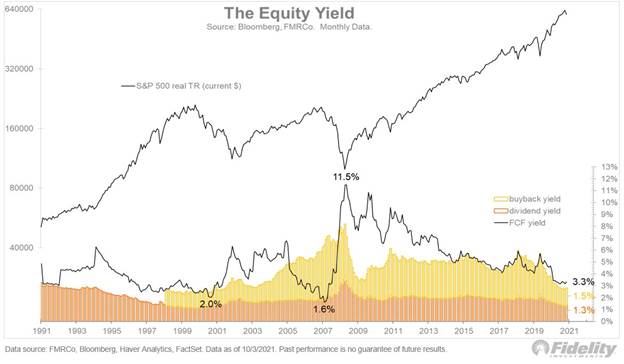 Valuation vs earnings growth: We seem to be revisiting 2010, a year into the post-GFC bull market, when QE1 ended while expected earnings growth peaked. That’s what’s happening now. Back then it produced multiple-compression. We’re seeing that again as per the chart below: 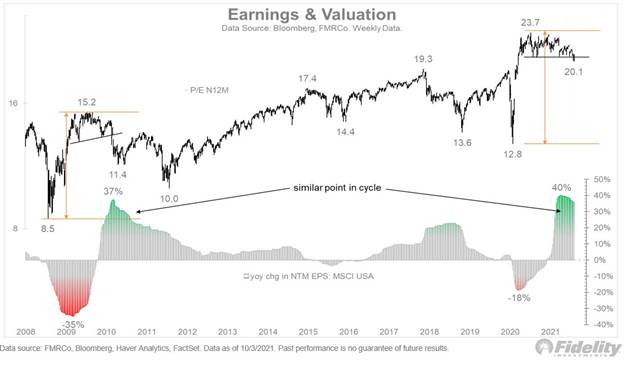 1.  It's truly amazing that the Fed has ignored their favorite inflation guage (PCI) by continuing QE and ZIRP. A taper announced at the November FOMC meeting will be too little and  too late to stop inflation from accelerating!  Check out this graph from the St. Louis Fed: 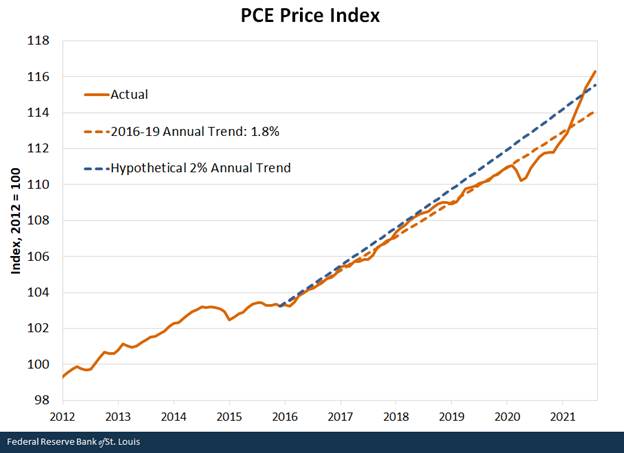 Victor says:  Energy prices are going up. At the same time, the U.S. federal government continues to spend. President Biden seems determined to keep his ambitious social spending plan close to $3 trillion, which will increase aggregate demand and result in higher inflation in the U.S.  Hence, inflation will not be "transitory," as Fed Chairman Jerome Powell has often claimed.

Demand for shares in this 11+ year old bull market came mostly from  corporate buybacks/M&A. Since the March 2009 low, $2.2 trillion of supply from IPOs and secondary offerings were more than offset by $7.2 trillion of buybacks & $9.3 trillion from M&A activity. That’s an 8-to-1 demand/supply ratio! 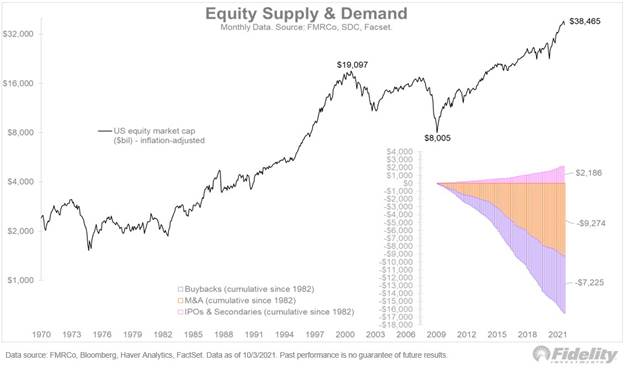