More quick takes and graphs this week.  Please let us know what you think.

Victor is still unpacking in his new apartment.  Please send him your best wishes!  He is researching a significant topic that we’ll reveal if you email the Curmudgeon (ajwdct@gmail.com).

It’s critical to understand just how extreme valuations have become. The chart below shows the valuation measure that we find best correlated with actual subsequent S&P 500 total returns over a century of market cycles: the ratio of nonfinancial market capitalization to corporate gross-value added, including estimated foreign revenues. 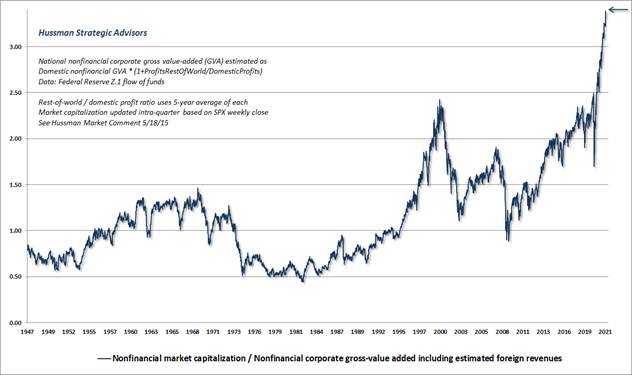 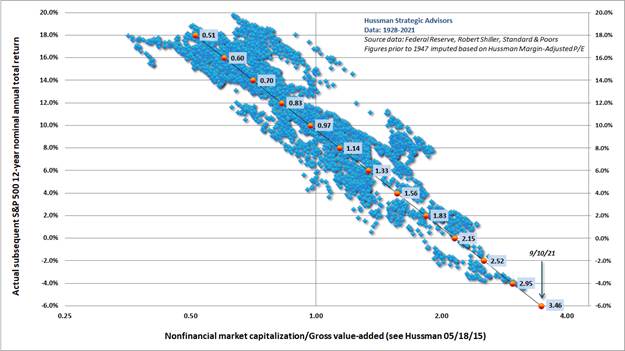 An investment security is nothing more than a claim to some expected stream of future cash flows. Elevated valuations do two things: they reduce the long-term return that one can expect from a given stream of future cash flows, and they increase investment duration – the sensitivity of prices to small changes in expected return. Depressed valuations create a margin of safety in the form of higher expected return and lower duration. Extremely elevated valuations do exactly the opposite.

The S&P 500 has risen 19% YTD, led by stronger-than-expected EPS (fwd EPS +29% YTD). However, we see both cyclical and secular risks ahead for earnings: (1) margin pressure from inflation (see our report entitled When good inflation goes bad), (2) peak globalization, where globalization has been a big driver of margin expansion over the last few decades, and (3) potential for corporate tax hikes, which could wipe out much of earnings growth next year.

The market is statistically overvalued vs. history on 15 out of the 20 metrics we track, and our long-term valuation model (r-sq: 80%) is suggesting negative 10-yr returns for the S&P 500 for the first time since 1999. The only valuation reads that favor stocks are relative to bonds, and relative to long-term growth expectations (which are at risk). TINA ("there is no alternative") remains a compelling argument for income-investors to buy stocks, especially amid rising inflation where bonds offer no inflation protection.

BofA - It's different this time:

"BofA’s private clients have never had this much exposure to stocks." That’s shown in this graph: 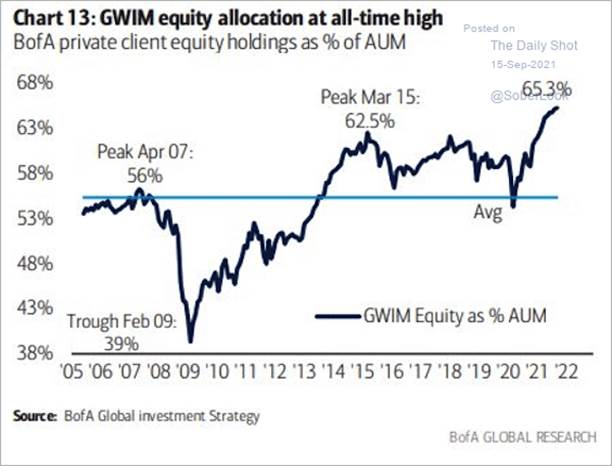 The $3 trillion market for low-rated companies’ debt is having its best year ever, powered by a rebounding economy and investors’ demand for any extra yield.

Low rated U.S. companies have sold more than $786 billion of junk-rated bonds and loans so far in 2021, according to S&P Global Market Intelligence’s S&P. That tops the previous high for a full year in data going back to 2008.

The record issuance marks a notable rebound from March 2020, when investors’ worries about widespread bankruptcies and defaults sent prices for low-rated debt slumping. Now, low interest rates and a stimulus-fueled economic rebound that has supported companies with weaker credit ratings have boosted the appeal of riskier debt.

Junk bonds and so-called leveraged loans are typically issued by companies with significant debt relative to their earnings, making them more sensitive to the economy’s trajectory. Economists surveyed by The Wall Street Journal expect the U.S. to grow around 6% this year and 3% in 2022.

In the junk-bond market alone, U.S. companies have issued more than $361 billion of bonds with speculative-grade credit ratings through Sept. 14, according to S&P Global Market Intelligence’s LCD. That is the second-most junk bonds ever sold in a single year and on pace to surpass 2020’s $435 billion record, analysts say.

“This is still likely to be one of the lowest periods for spread volatility on record and will continue to help support the relative appeal of high yield to investors,” Deutsch Bank analysts wrote.

Earlier this week we learned that the European Central Bank (ECB) has been hiding its long-term inflation forecasts. Yes, you read that right—hiding. Their forecasts completely contradicted their nonsensical “transitory” inflation lie.

We’re caught in a nefarious news cycle of monetary and fiscal officials acting against the public good. They’re selling snake oil to the people as inflation poisons the well.

Narratives and stories abound, numbers and data be damned. The Fed and ECB deliberately turn a blind eye to the data. The Old Wall is clueless on how to interpret it.

Meanwhile, narrative-sellers spin data in whatever way generates the most clicks.   Here’s an illustration of that: 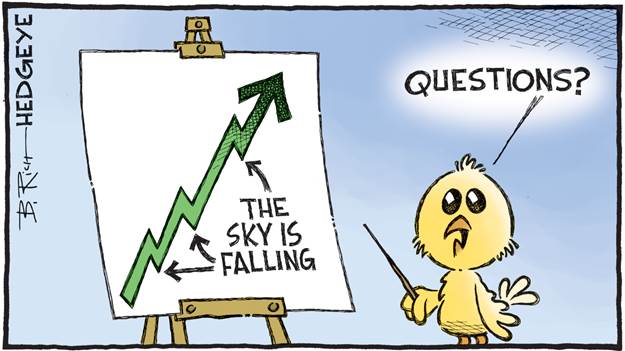 Doomberg - We Are Running Out of Some Stuff:

Sometimes I think I’m taking crazy pills. In my real life, everywhere I look I see less choice and higher prices. Everybody I talk to has a story about something they need to buy but can’t. Many big-ticket items have unprecedented lead times, assuming you can get them at all. My friends in the corporate world are focused on raising prices ahead of their increasing input costs. They are also staying up at night worried about accessing supply altogether – be it parts, materials, or even labor. I see “shrinkflation,” both in the size of the consumer goods I buy and in the level of service provided, compared to the pre-Covid period. 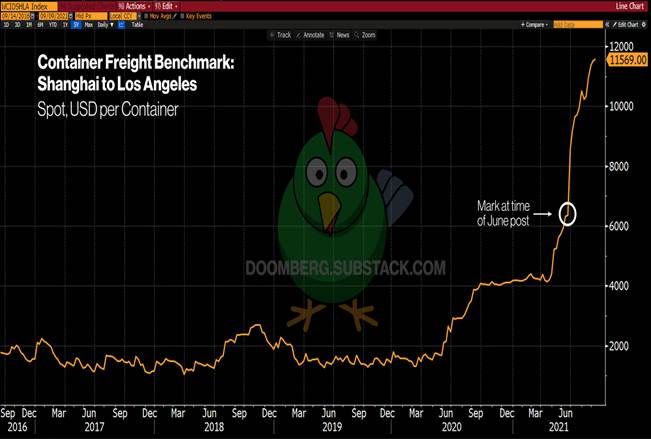 Get ready to keep paying more for less during the Thanksgiving/ Christmas shopping season. These shipping costs will be passed on to the consumer. How long before Biden shakes his angry fist at pandemic profiteering by the dirty shipping cartel?

The One Thing That Matters Is Inflation, Gavin Baker:

Gavin Baker thinks that inflation will become the key factor determining the direction in financial markets.

If you go back to 2010-11, the last time there was significant quantitative easing, there were two remarkable open letters to Fed Chairman Ben Bernanke in the Wall Street Journal, signed by the world’s greatest macro investors and economists. Both said basically the same thing: QE is a terrible risk, you’re going to unleash hyper-inflation, and you have to stop. These op-eds were written with a lot of conviction, and they were dead wrong. I think because of that, almost no one is really pushing back on what the Fed is doing today. At the same time, unlike in 2010-11, very few people in the United States Congress are pushing back against stimulus programs, and today the stimulus is a lot bigger. To me, that lack of real pushback is concerning, just because inflation and deflation are the two things that financial markets cannot abide.

“When the public woke up to the historical merits of common stocks as long-term investments, they soon ceased to have any such merit, because the public’s enthusiasm created price levels which deprived them of their built-in margin of safety, and thus drove them out of the investment class.

Then, of course, the pendulum swing to the other extreme, and we soon saw one of the most respected authorities declaring (in 1931) that no common stock could ever be an investment. Precisely because the old-time investor did not concentrate on future capital appreciation, he was virtually guaranteeing to himself that he would have it.

And, conversely, today’s investor is so concerned with anticipating the future that he is already paying handsomely for it in advance. Thus, what he has projected with so much study and care may happen and still not bring him any profit.

If it should fail to materialize to the degree expected he may in fact be faced with a serious temporary and perhaps even permanent loss.”