Cost of Money at 5,000 Year Lows Even as Inflation Surges

We provide another “food for thought” column which we hope you find informative and useful.

Wish Victor good luck in his new apartment which he moved into this past week!

Fed’s Kaplan, Rosengren to Sell All Stocks Amid Ethics Concerns:

Boston Fed chief Eric Rosengren and Dallas Fed’s Robert Kaplan were actively trading in a range of investments during a year in which the central bank took sweeping policy actions to protect the U.S. economy from Covid-19.

Rosengren and Kaplan’s trading activities – revealed among the annual disclosures filed by all 12 regional Fed presidents last month – drew sharp criticism at a time the Fed is already under fire from some quarters for monetary policies that have elevated asset prices, which disproportionately benefit wealthier Americans.

“At a time when they are being roundly criticized and to the extent to which the policies have made the rich richer, you need to question the optics of what these guys were doing,” said Mark Spindel, chief investment officer of Potomac River Capital in Washington. “It doesn’t shed positive light on them.”

Bond Bubble- Biggest of All Time?

Being at a multi-millennia low in rates means that bonds are also at a 5000-year peak in valuation.  Now, I think that qualifies as a top contender for the biggest bubble ever! 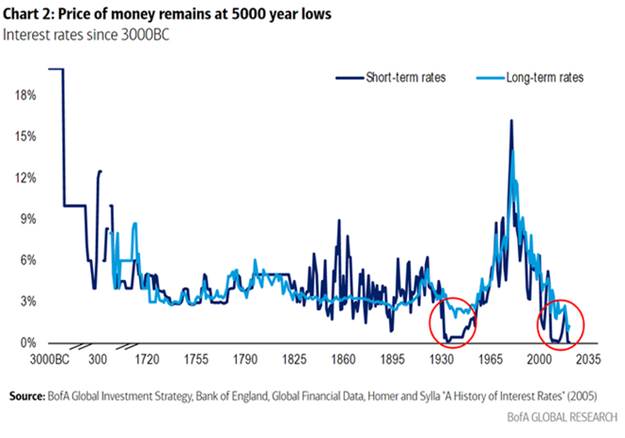 In many ways, conditions today seem the opposite of what they were forty years ago as bond and stocks were poised to make their historic runs. Yet, investors are positioned as if it’s 1982 all over again.

The highly respected and closely watched Atlanta Fed’s GDPNow forecast for the third quarter has been slashed by 41% since August 2nd – from 6.3% (annual seasonally adjusted) GDP growth to a tepid 3.7% projected GDP growth as of September 10th.

The GDPNow forecast is constructed by aggregating statistical model forecasts of 13 sub-components that comprise GDP. Other private forecasters use similar approaches to “nowcast” GDP growth. However, these forecasts are not updated more than once a month or quarter, are not publicly available, or do not have forecasts of the sub-components of GDP that add “color” to the top-line number. The Atlanta Fed GDPNow model fills these three voids.

Absolutely Everyone is Buying Stocks, For Now:

On Tuesday I wrote about the spectacular surge of investor flows, particularly retail investor flows, heading into stocks. Here is yet another chart, this one from Strategas, that indicates how extraordinary the trend is. It compares flows into equity exchange traded funds for each of the past 15 years.

And this is happening at a time when equity mutual funds are not losing assets to ETFs as quickly as in most years, making it even more remarkable. Here is how Todd Sohn of Strategas described the phenomenon to me: “It’s the persistency of the equity rally, up 100 per cent since last March with barely a pullback. It’s everybody into the pool, it’s everything, every region, every sector.”

Nikolaos Panigirtzoglou, the JPMorgan strategist’s estimate of the composition of the global portfolio, that is, all the stocks, relative to all the bonds and cash:

“If you look at this chart there have been diminishing peaks. Yes, there is a lot of liquidity in the system, but relative to the size of the equity market, it is pretty low, and that is a warning sign. [The share of wealth in equities] can keep going up, but we are reaching territory where if sentiment changes for retail investors the vulnerability is very high.”

Analysts at firms including Morgan Stanley, Citigroup Inc., Deutsche Bank AG and Bank of America Corp. each published notes this month cautioning about current risks in the U.S. equity market. With the S&P 500 already hitting 54 records through Thursday this year—the most during that period since 1995—several analysts said that they believe there is a growing possibility of a pullback or, at the least, flatter returns.

Behind that cautious outlook, the researchers said, is a combination of things, including euphoric investment sentiment, extended valuations, and anticipation that inflation and supply-chain disruptions will weigh on corporate margins. In a Wednesday note, strategists at BofA Securities said they saw little to be excited about, asking, “What good news is left?” They added, “A lot of optimism is already priced in.”

The analysts’ cautious outlook for U.S. stocks presents a contrast to the so-called TINA—or “There Is No Alternative”—motto that has dominated investors’ outlook for much of the past year. Because yields on other assets such as bonds have been so low, many investors have justified their continuous bullish positioning in stocks. Accommodative monetary policy from the Federal Reserve has provided a continuous boost for equities this year, too, as has the lure of big investment returns from a swath of companies, ranging from meme stocks to Covid-19 beneficiaries.

In a note last week, Morgan Stanley strategists wrote that they were downgrading their rating on U.S. equities to “underweight,” saying they prefer stocks in Europe and Japan and view cash as increasingly attractive to hold.

“We expect an understandable level of eye-rolling as we move overweight cash,” the Morgan Stanley team including Andrew Sheets wrote in the note, adding the caveat that select international equities and other assets are attractive relative to cash. The note continued, “Morgan Stanley strategists forecast cash to outperform U.S. equities, government bonds and credit over the next 12 months.”

“The trouble with the world today is that the intelligent people are full of doubts while the stupid ones are full of confidence.” – American poet Charles Bukowski

“Macro conditions are deteriorating, and Bear Market Probability is rising. The trend of the dollar bears watching as it's in a poor cyclical and seasonal window.” – Jason Goepfert, Sentiment Trader