With all the noise about the stock, bond, and crypto-currency manias, the residential real estate bubble (if there is one?) has been mostly neglected by the mainstream media.  That’s despite a red-hot U.S. housing market.

The S&P CoreLogic Case-Shiller Index, the leading measure of U.S. home prices, posted a 16.6% annual gain in May, up from 14.8% in April.  That’s the highest reading in more than 30 years of data and the 12th straight month of accelerating prices. The 20-City Composite posted a 17% annual gain, up from 15% a month earlier. The 20-City results surpassed analysts’ expectations of a 16.3% annual gain, according to Bloomberg consensus estimates.

Is that a healthy price rise based on fundamentals or is it yet another Fed created bubble?

Let the reader decide, but you already know our opinion.

It’s been reported that home price bidding wars have become common, with many buyers forced to pay all cash.  Some bids are coming in $1 million over the asking price.  Stories abound of buyers signing contracts on homes without even doing a walk through. Some real estate agents are advising buyers to forgo inspections, saying they will just slow the process.

“I witnessed the price rise firsthand. I recently returned from a family vacation in the North Carolina mountains, where many homes now sell for double or triple the price compared to just a couple of years ago,” wrote Lisa Brown, CFP®, CIMA® in a Kiplinger article titled, Red-Hot Housing Market Today Could Burn Real Estate Professionals Tomorrow.

Industry executives and economists agree this explosion in home values is unsustainable, as home prices can't go up 20% year-over-year forever, especially with the below 3% trend GDP growth the U.S. has experienced for many years.

“The market’s strength continues to be broadly-based.  Housing price growth set a record for the second consecutive month,” said Craig J. Lazzara, managing director and global head of index investment strategy at S&P Dow Jones Indices, in a press statement. “A month ago, I described April’s performance as 'truly extraordinary,' and this month I find myself running out of superlatives."

“This month's S&P Case Shiller Index highlighted a housing market in full swing during May 2021, when strong demand and insufficient supply pushed home prices up at a record-breaking pace,” said Realtor.com Senior Economist George Ratiu in a statement prior to the results. “The combination of historically-low mortgage rates, business re-openings and the lifting of pandemic restrictions fueled a buying frenzy with multiple bids, price escalation clauses and contingency waivers. The summer buying season is fully underway, with many families seeking to take advantage of the current market and favorable financing to find their next home before the start of the school year.”

“Despite home prices skyrocketing, the acceleration in home price growth has not deterred prospective buyers’ desire for ownership,” CoreLogic Deputy Chief Economist Selma Hepp said in a press statement prior to the results. “In fact, the number of homes selling over the asking price continues to rise with more than half of homes sold now closing above the original listing price.”

“I expect that home price growth will continue to inch upwards until more existing homeowners choose to sell their homes and more new homes come on the market,” said Bill Dallas, President of Finance of America Mortgage, in a statement prior to the results.

"We have a housing shortage. In shortages, prices don't decline," said Lawrence Yun, chief economist at the National Association of Realtors. "Some buyers are simply being priced out," he added.

“It’s making me nervous that you’ve got this incipient housing bubble, with anecdotal reports backed up by a lot of the data,” James Bullard, the president of the Federal Reserve Bank of St. Louis, said during a call with reporters Friday. He doesn’t think things are at crisis levels yet, but he believes the Fed should avoid fueling the situation further. “We got in so much trouble with the housing bubble in the mid-2000s.”

"In some ways this is an even hotter housing market than before the Great Recession," said Aneta Markowska, chief economist at Jefferies. "But the risk of this turning into a bubble is much lower."

The graphs below tell the story better than words: 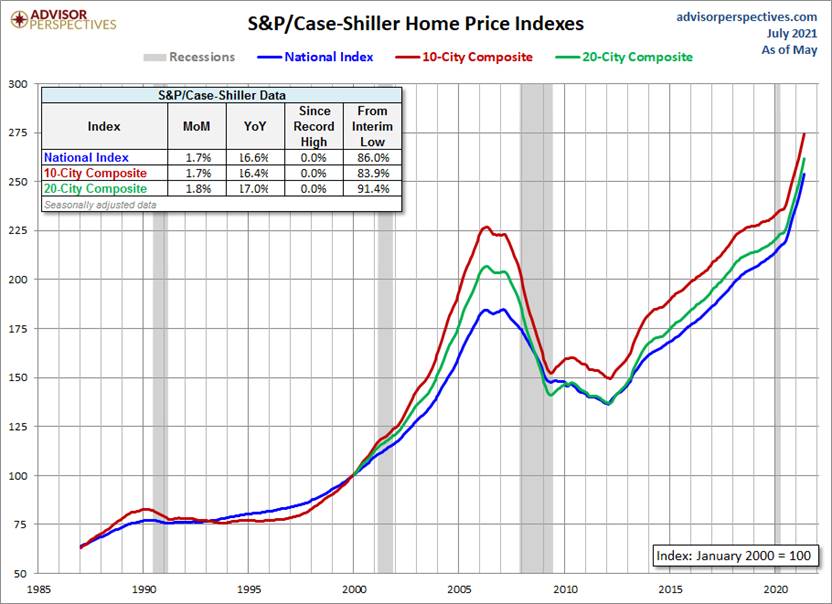 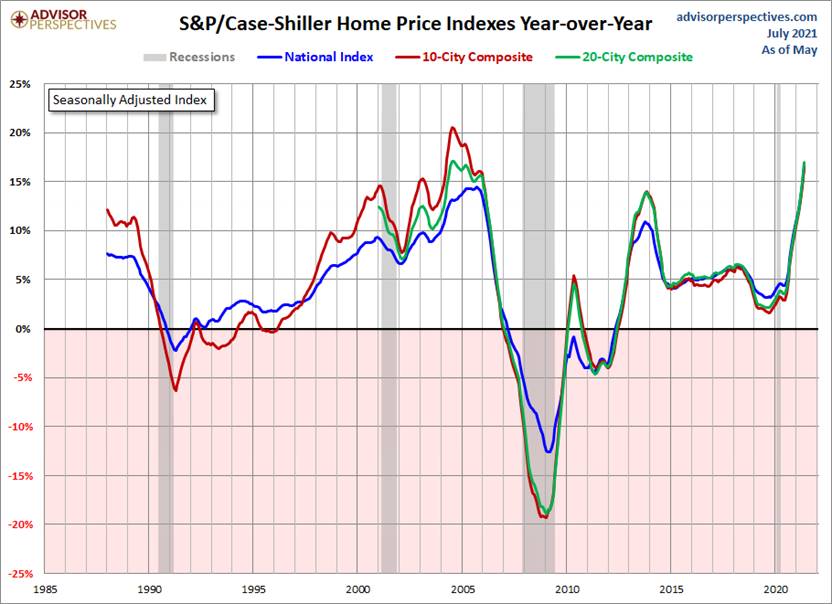 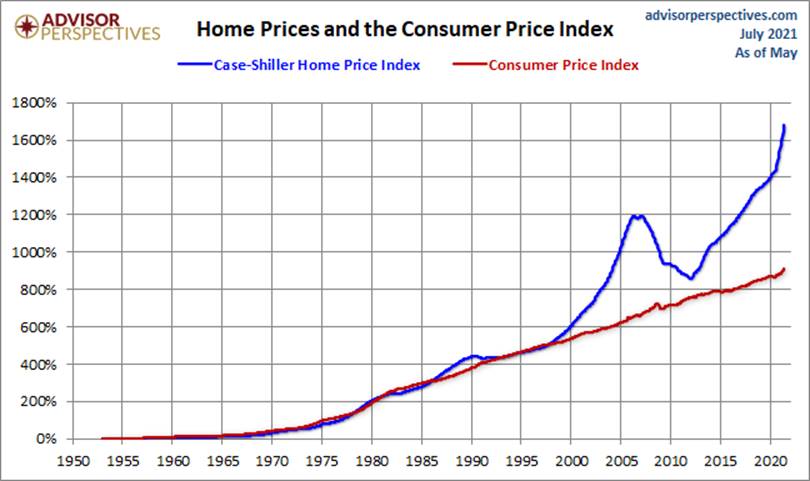 Elliott Wave’s Robert Prechter says the trends of the real estate and stock markets tend to be strongly correlated. That’s shown in this chart: 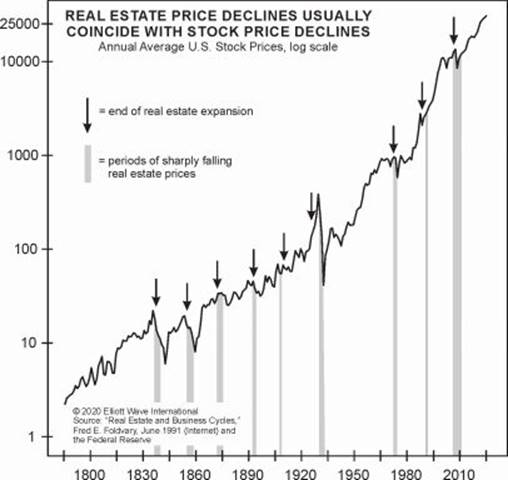 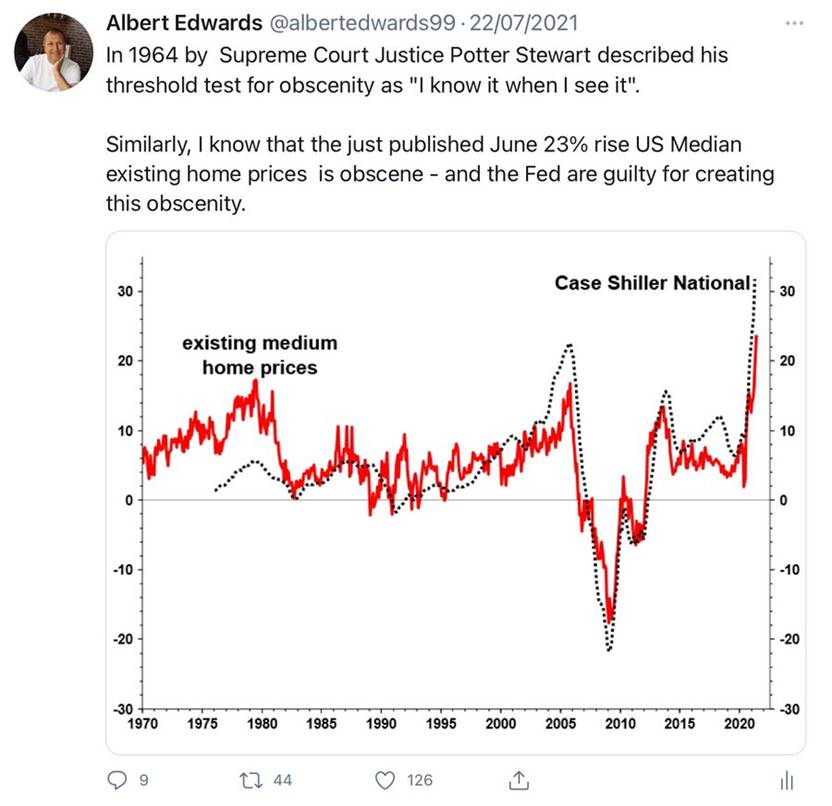 The alternative for companies to effectively raise prices is to shrink the size of what’s in the bag.  So, the price stays the same, but you have to buy more in order to get the same quantity. The same is true for real estate, as per the real-life problem I’m now dealing with.

[The Fiend first moved to a small town in California 15 years ago and rented a small one-bedroom apartment for $600 a month. The same apartment today (if you are lucky to find one available) is going for $1,550 a month. Of course, wages are higher, but I don’t believe they have matched the increase. People don’t seem to understand that it isn’t how much money you have but what you can buy with it.]

Due to a fire in my apartment building, I have to move out and am now urgently searching for a new place to live. I can rent a two-bedroom apartment for $3,350 without utilities, but I’d only get a “whopping” 1,330 square feet! To get the 1,980 square feet I’ve had for years, it would cost me $6,900 a month WITHOUT utilities.

This is a classical “get less for more money” situation.  Do you get the picture?

Watching Fed Chair Jay Powell explain inflation was hilarious. It was like an Abbott and Costello “Who’s on First” baseball routine.  Powell says inflation can run over their arbitrary 2% target, because it was lower than 2% before?  I wonder if Powell ever thought of starting his base from 1970, when inflation was 3.92%?  Better yet, from 1913 at 3.09% inflation?

The Fed’s goal is apparently to move the middle class into higher tax brackets via inflation, so that they pay higher taxes which would partially reduce future budget deficits.  In 24 years at the current 5% (and heading higher) inflation rate, combined income tax rates of 50% (including Federal, State and City taxes) would be common.

Assuming ONLY a 5% compounded inflation based wage increase, an individual making an income today of $65,000 (Median household income was $68,703 in 2019 – the latest number available), would be making over $200,000.  That would put that individual in today’s 37% federal income tax bracket.  But it’s worse than that, because income tax rates will surely increase with massive government spending needing to be offset by additional tax revenues.

[The Curmudgeon believes the Fed’s hidden agenda for continued QE is to monetize the huge federal government budget deficit].

About half of small bankers in a recent industry survey said the current state of the housing market poses “a serious risk” to the United States economy.

“Interest rates are one factor that’s supporting (real estate) demand, but we really can’t do much about the supply side,” Jerome H. Powell, the Fed chair, explained during recent congressional testimony.

The Fed’s policy-setting committee voted Wednesday to keep monetary policy set to full-support mode, which includes buying AT LEAST $40B of mortgage-backed securities each month.

To the Curmudgeon, the Fed is like the guy who poured gasoline on an out of control blazing fire, as it continues to buy mortgage bonds while the residential real estate market is soaring.

Bank of America acknowledged that "bubbles are notoriously difficult to identify in real time." They only become obvious in hindsight, or so it seems?

“We felt a little bit more comfortable paying more for the house to lock in low interest rates. Interest rates are so low, and money is cheap. Why not do it?”  David Pomeroy as reported in the NY Times.