According to the National Bureau of Economic Research (NBER), the "official" arbiter of U.S. business cycles, the coronavirus induced recession ended last April, ending the shortest economic downturn in U.S. history at only two months. What most analysts missed is that the recession was over two months BEFORE the NBER said on June 8, 2020, that the U.S. economy had peaked in February, marking the recession’s onset.

Isn’t a recession defined as 2 consecutive quarters of declining GDP?  Evidently NOT!

From February 2020 to April 2020, the U.S. economy fell by 31.4% (as measured by real GDP), while U.S. stock markets plunged by 33%.  Both of those declines are within historical norms as you can see from Table in the next section of this article.

In determining that a trough occurred in April 2020, the committee DID NOT conclude that the economy has returned to operating at normal capacity. The committee decided that any future downturn of the economy would be a new recession and not a continuation of the recession associated with the February 2020 peak. The basis for this decision was the length and strength of the recovery to date.

In case you’re puzzled (as we are), have a look at NBER’s FAQ’s.  Notably, the NBER stated that any subsequent downturn would get labeled as a “new” recession.

That begs the question is the economic growth we’ve seen in 2021 sustainable?  John Williams weighs in with his opinion, while Victor’s hard-hitting comments should shake you out of the complacency that’s so prevalent today.

Recession Tables and Charts with Commentary: 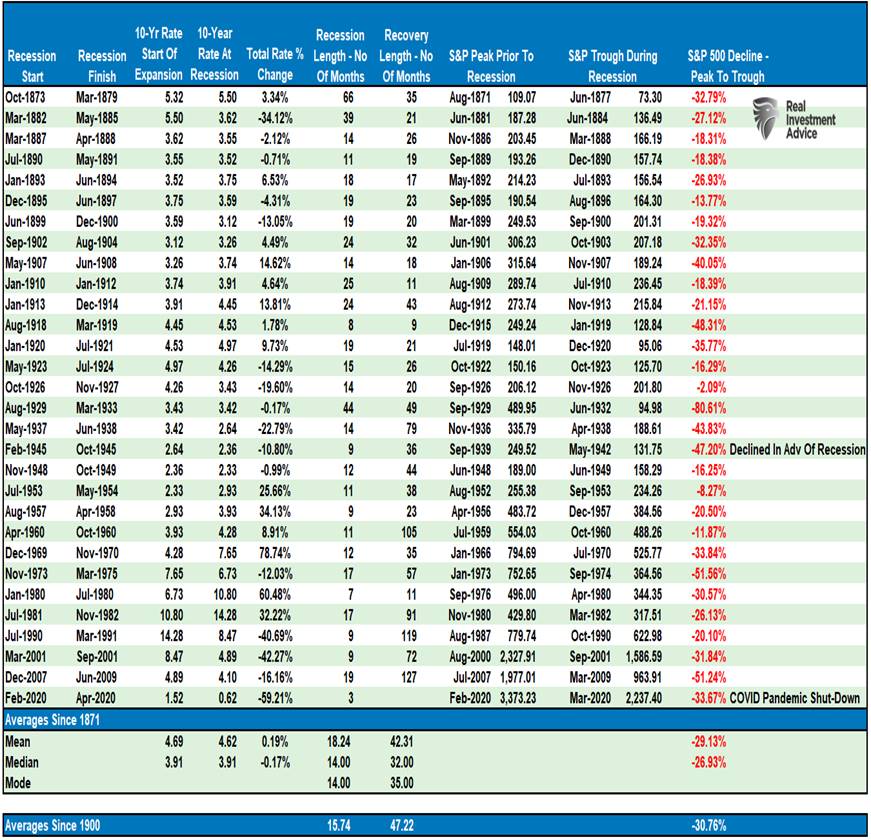 Below is a terrific chart showing how horrible the 5-year average real GDP has been since the 2008 great recession.  It’s still declining with a current reading of only 1%. 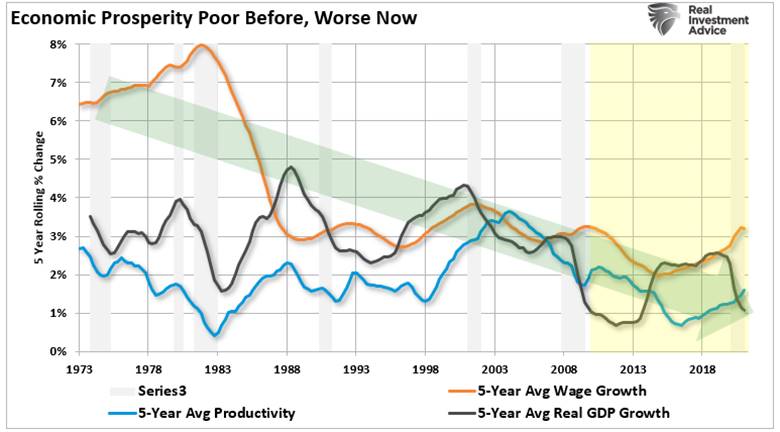 To be sure, the U.S. is the world’s largest economy. Yet, in the last two decades, its growth rates have been decreasing. In the 1950’s and 1960’s the average growth rate was above 4%, in the 70’s and 80’s dropped to around 3%. In the last ten years, the average rate has been below 2%.  Yet that hasn’t stopped the U.S. stock market from exponential rising prices (especially since the March 2009 bear market bottom).

Isn’t it ironic that as economic growth has slowed precipitously, stock prices have increased at a rate so much higher than when economic growth was much better?  We’ve explained this conundrum many times, but the Curmudgeon is still in disbelief.

Graph of S&P 500 with Recessions Shaded: 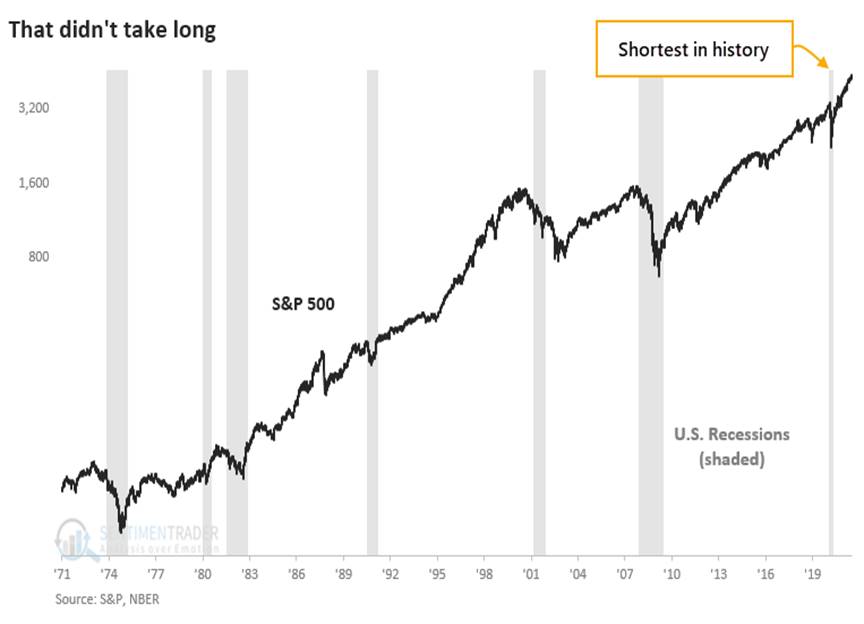 What Happens After the Recession Ends:

To see if there is any potential use in becoming more optimistic once a recession is officially declared to be over, Sentiment Trader looked at how various asset classes performed following a publicly declared end to a recession by the NBER.

In the very short-term of a couple of weeks, the S&P 500 dropped after each of the last five end of recession declarations.  However, stocks were mixed up to a year later, yields typically rose, and Growth stocks struggled.  Only over the next 2-3 years did the S&P show above-average performance, with low risk and high reward. 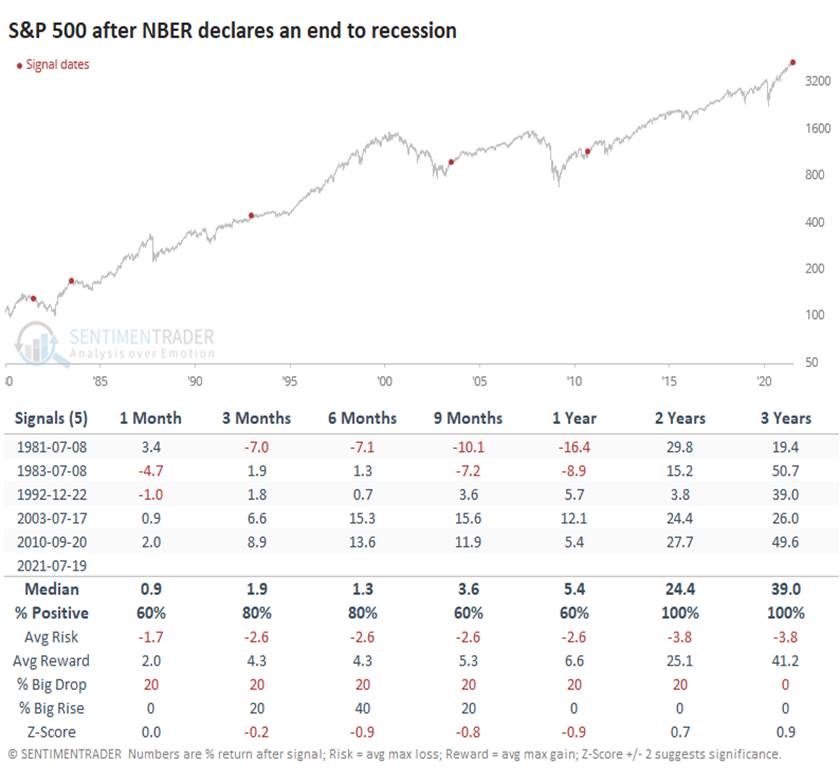 In a note to subscribers, Sentiment Trader’s Jason Goepfert wrote: “Now that headlines will be trumpeting an end to the shortest recession on record, we should be on guard that it doesn't necessarily mean clear sailing, especially for Growth stocks.”

“A Recession is just the first leg of a Depression. Recessions are measured only from Peak-to-Trough, while Recoveries are measured from Trough-to-Regaining-the-Pre-Recession-Peak, which is not at hand and never has been recognized formally by the NBER. Thereafter, an Expansion is in Place until the next formal Peak, which, again the NBER does time.

The timing of the release of NBER’s announcement is curious, just 9 days before the July FOMC announcement and 10 days before likely major downside GDP benchmark revisions. It shall be interesting to see how the NBER handles the lowered GDP circumstance.”

Williams also notes that the U.S. monetary base (“high powered money” that is now mostly used to fuel speculation and gambling in various asset classes and other things) has hit an all-time high.

The Currency in Circulation component continued hitting successive, historic all-time high dollar levels and record-high growth rates (against the PPT) of 17.8%, 19.9%, 20.7%, 21.2% and 21.6% in March, April, May, June, and late-July 2021. The June 2021 and Late-July data were estimated from the weekly reporting of the related series by the Federal Reserve Board.”

The NBER says the last U.S. recession was only two months. What does that tell you?

I’m a complex, but very logical thinker. To discuss this or any other topic one must know what you’re talking about and therefore we must define our terms. Without definitions we do not have concepts. Without concepts we are without identifying words. Without concepts or definitive words “anything can mean anything,” which means nothing!  Let’s have a closer look.

The NBER was founded in 1920 and has classified recessions and recoveries from 1854. This is their policy statement:

The National Bureau of Economic Research (NBER) is a private, nonprofit, nonpartisan research organization dedicated to undertaking and disseminating unbiased economic research to public policymakers, business professionals, and the academic community. The NBER's greatest asset is its reputation for scholarly integrity. Affiliated researchers are expected to conduct their research in ways that adhere to the highest standards of scientific conduct and that will not reflect adversely on the integrity of the NBER. The NBER has established policies that cover research conduct, participation in NBER conferences, employment-related interactions, and the professional conduct of NBER affiliates more generally.

Here’s what they say about recessions (emphasis added):

“A recession is a period of falling economic activity spread across the economy, lasting more than a few months (?), normally visible in real GDP, real income, employment, industrial production, and wholesale-retail sales. The trough marks the end of the declining phase and the start of the rising phase of the business cycle."

As the Curmudgeon points out, a recession had been typically recognized as two consecutive quarters of economic decline, as reflected by GDP in conjunction with monthly indicators such as a rise in unemployment.

However, the NBER now says that two consecutive quarters of a decline in real GDP is NOT how a recession is defined anymore.  Also, does two months meet the criteria of “more than a few months?”

In other words, there is NO clear definition of a recession anymore. This lack of clarity also extends to U.S. laws.  For example, the Fed is prohibited from purchasing Corporate Debt as per the 1913 “Federal Reserve Act.” But in the past year, the Fed has bought corporate bonds as well as junk bond ETFs.  No amendment was passed to allow that.  Yet no one seems to care?  Why not?

-->One must conclude that U.S. laws have become meaningless!

The NBER, which has defined recessions for 166 years (from December 1854) now identifies a recession as whatever seems to fit its agenda or narrative.

That certainly causes many questions to arise.  What it shows to me is that several state Governors ordered pandemic closures of businesses and severe restrictions that caused a steep U.S. economic decline, while the Fed went way beyond its twin mandates (stable inflation and maximum employment) to prop up bond and stock markets.

In addition to Fed “printing” trillions of dollars, there was also several rounds of stimulus checks from the U.S. Treasury Dept. All that enabled those who have substantial financial assets (the rulers/controllers of our society) to double or even triple their net worth since markets bottomed in March 2020!

Yet none of the Fed’s recent actions are permitted by the U.S. Constitution.  Here’s why:

Article One, Section 8 and Section 10 of the U.S. Constitution does not allow printing fiat paper money (aka “Bills of Credit”).  [Reference: Juilliard vs Greenman -1884].

Moreover, the Federal Reserve Board and its banks are not a part of the federal government. They exist because of an act of Congress.  In reality, they are a bunch of self-interested bankers.  It appears the FED wants to serve the interests of the wealthy and politicians desiring to be re-elected, rather than the man on the street.

Also, State Constitutions only give the Governors emergency powers for a short period of time (usually 30 days).  After that they would need to pass a law through the state legislature on shutdowns. Astonishingly, they never did that!

The obvious conclusion of all of this is that at least since 1982, the U.S. economic system is NO LONGER based on capitalism!  If not capitalism, what then is the U.S. system of government today?

I submit that it’s Fascism with a twist, in which Multi-National Corporations dictate the terms, because they have “bought” our elected officials (who our citizens voted to represent them).

·       Fascism in economic terms (as Mussolini created it) is when the title of the property still belongs to its owners, but the government can dictate what they can do with it.

·       Socialism is where the government has the title of the Property.

·       Corporativism is the dominant structure of who controls what today, i.e., the wealthiest, who buy the lawmakers to get what they want! This is the system and the NBER has evidently adopted it.

Sadly, laws mean nothing anymore and the power has moved from the individual to the government, the Fed, and the biggest multi-national corporations.

I defer to the reader to picture the end game, but it won’t be pretty.

For those confused by why the markets are making new highs:

“Economic history is a never-ending series of episodes based on falsehoods and LIES -not truths. It represents the path of big profits! The object is to recognize the trend, whose premise is false, ride that trend, and step off before it is discredited.” George Soros.

“I believe the Federal Reserve has already made a significant policy error that can lead directly to recession. Even more egregious is the Fed seems to have assumed a third mandate: keeping the stock market rising. Not only does this exacerbate wealth disparity, but it also borders on malpractice because, at some point, the Fed will have to take its foot off the accelerator. When that happens the potential for another “taper tantrum” is significant. The Fed absolutely should not think the stock market is its responsibility. To do so (as I believe they are) sets up all of us for extreme future volatility.”

“Now, you might say Fed officials surely know this. Why are they still pumping? An excellent question. We may get an answer someday, years from now, when the people making those calls are able to talk more freely. For now, we can only guess, and my best guess is that the Fed is effectively monetizing the giant and fast-growing government debt. They aren’t technically monetizing because they don’t have that authority, but it amounts to the same thing.”