U.S. technology deals have boomed months into the COVID-19 pandemic. Tech merger and acquisition (M &A) transaction volumes in 2020 increased by 72% (year over year) to $383 billion, according to financial data provider Refinitiv.  The first quarter of 2021 produced the highest tech deal volume ever, with over 700 deals totaling $155 billion announced.

The technology sector dominated global deal activity for the seventh month in a row, with $87 billion worth of deals struck in February 2021.

Reuters reports that close to half the U.S. tech sector deals last year included stock compensation.  That’s the highest percentage since 2016, versus only 27% in 2019, Refinitiv said.  In comparison, 39.5% of deals across all sectors used corporate stock for financing in 2020.

The tech trend continued into 2021 as half of the deals in the sector announced in the first quarter also used stock.  Let’s take a closer look at some tech sector M & A deals and how they were financed.

GlobalData’s latest report, “M&A in TMT – 2020 Themes,” notes that there were a total 702 M&A deals announced with a transaction value greater than or equal to $50m in the global TMT (technology-media-telecom) sector in 2020. The combined transaction value of $903bn was a 25% increase on 2019, when there was $723bn worth of deals.

The market research firm believes M&A activity will continue at a very high level throughout 2021 as companies focus on their key technologies and adjust to the realities of the COVID-19 pandemic.

Deloitte agrees: “Conditions are ripe to support M&A activity into 2021, including low interest rates, middle market resurgence, the need to deploy over $1.7 trillion in private equity dry powder, and a growing sense of clarity around the path to pandemic and economic recovery. The stronger

than anticipated rebound in global TMT M&A since July 2020 looks primed to continue into 2021.”

As you might have expected, acquisitions of the hottest (“on fire”) artificial intelligence (AI) startup companies were dominated by U.S. tech giants, according to GlobalData.

“Apple, Google, Microsoft and Facebook collectively undertook 60 acquisitions in the AI tech space during 2016–2020, while Apple led the race with 25 acquisitions. AI has remained a key focus area for tech giants and growing competition to dominate the space has resulted in an acquisition spree among these companies,” said Aurojyoti Bose, Lead Business Fundamentals Analyst at GlobalData.

The popularity of stock as currency for deals has been fueled by the soaring valuations in the tech sector, deal makers said. The NASDAQ 100 Index trailing price-to-earnings (P/E) ratio is 37.55 (according to the WSJ), the highest since 2000.  Speculators and traders (there are really no investors left) are throwing money at anything related to tech which has caused a stupendous rise in tech stock prices and valuations.

This has made tech company acquirers keen to use their highly valued shares, rather than cash, to pay the frothy premiums that acquisition targets demand. While an all-stock or cash-and-stock deal may dilute the shareholders of the acquirer through the issuance of new shares, it reduces the risk of it overpaying because it hinges more on the relative valuation of the two companies, rather than the absolute valuation of the target, investment bankers said.

“It allows buyers and sellers to participate equally in the upside or downside, as opposed to getting cashed out,” said Mike Wyatt, Morgan Stanley’s global head of technology M&A.

“Some people think the deal overvalued Auth0, but it is actually lower than our multiple,” Okta CEO Todd McKinnon said in an interview, adding Auth0 was also growing faster than Okta.

San Jose, CA laser maker Coherent Inc. said Thursday morning that it has agreed to a cash-and-stock buyout deal estimated to be worth about $7.01 billion from Pennsylvania-based engineered materials and opto-electronic components maker II-VI.

Coherent common stockholders will get for $220 in cash for each of their shares and 0.91 of a share of II-VI stock at the deal's completion, expected in the fourth quarter of 2021. The deal must still get regulatory approval and agreement by both companies' shareholders.

Stock deals can also come with tax benefits for the acquisition target. Deal proceeds are not taxable at the corporate level in the United States as long as stock makes up at least 40% of the purchase price consideration.

Hark Back to the Days of Yore- the Dot Com/Fiber Optic Boom:

In the first quarter of 2000, now bankrupt Nortel Networks acquired optical networking company Qtera, digital subscriber line (DSL) developer Promatory, and paid $3.25 billion in STOCK for photonic switch start-up XROS.  The latter company did not even have a working prototype optical switch, let alone any sales or earnings.  Nortel at that time was said to be: “accelerating its attempts to produce the world's first all-optical wide area network.”

Guess what?  Twenty-one years later, there is still no all-optical network! [1.]  As a result, almost all of the optical networking start-up companies acquired by Nortel, Lucent, Alcatel, and Cisco were shut down and written off.

Could the same thing happen with many of the corporate acquisitions now being made in AI & Machine Learning, blockchain, fintech, biotech, greentech, software, space exploration, satellite communications, etc. also go bust?  What do you think? 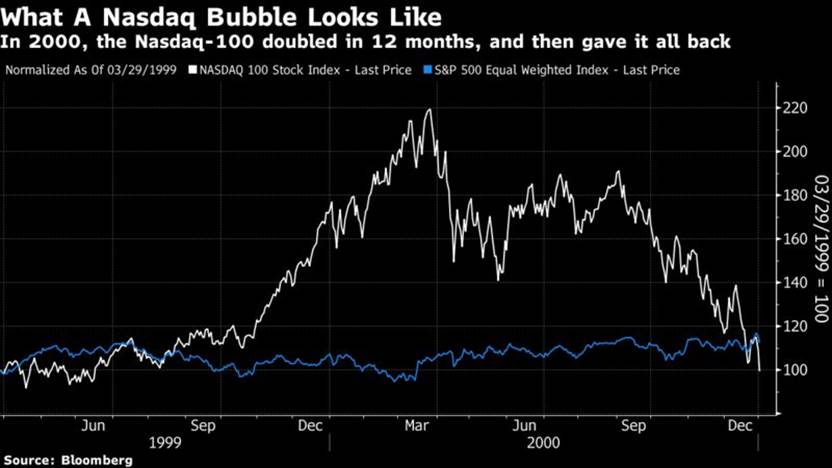 Note 1. Even though almost all global network operators use a fiber optic backbone (many cellular networks use microwave transmission for backhaul), there are ZERO photonic/ all optical switches deployed in commercial optical networks. Instead, the actual switching of optical signals from input to output ports is done via an electronic (NOT photonic) switching matrix in a O-E-O switch (optical-to-electrical-to-optical).

For 12 years now, central banks have set short term interest rates below the rate of inflation (or even negative nominal rates overseas). As a result, negative real interest rates on safe assets, like CDs and savings accounts, have pushed large institutional investors (and small specs) into riskier assets yielding higher potential returns.  But that is in large part based on the “greater fool theory” --what is going up will continue to go up because there will be a greater fool that will be buying that risky asset in coming days, weeks, and months.

The motivation for many of today’s tech stock deals is reminiscent of the late 1990s- early 2000 period, just before the dot com bubble burst.  Just like 1999 and early 2000, expensive stock is being used as the capital to close many tech acquisitions.  That is yet another warning sign, that this long, speculative bull market is coming to an end.

Despite the stimulus inspired pop expected for U.S. GDP, we urge readers to be cautious and careful with their money.  That’s especially true with long and intermediate interest rates rising and in a strong uptrend.  Buyer beware.

Stay calm, be well, life will get better, and till next time…...