This is the first article of a two-part series on excessive government spending, ballooning deficits/debt, and guaranteed income aka “free handouts.”  The latter topic will be covered in tomorrow’s Curmudgeon post.

On Friday, the U.S. Senate passed the bipartisan debated $1.9 trillion COVID-19 aid bill.  One of the biggest criticisms of the bill is that it is too large overall at a time when the Congressional Budget Office (CBO) projects the economy is running roughly $700 billion below potential.

“I don’t think there’s any justification from an economic standpoint or a bottom-up standpoint for $1.9 trillion in further Covid relief. A package half that size would still be a safe boost to the economy,” said Marc Goldwein, senior policy director for the Committee for a Responsible Federal Budget who was quoted in the Washington Post.

“To me the part that’s the hardest to justify is the $1,400 checks to everyone,” said Greg Mankiw, a Harvard University professor who served as President George W. Bush’s chief economist from 2003 to 2005. “They are making large payments to people who don’t need them.”

Mankiw noted that two of his adult children have not lost jobs have but have nonetheless been receiving stimulus checks. A family of four who didn’t lose any income in this coronavirus crisis would still receive an additional $5,600.

Many economists are also concerned that the money, along with enhanced unemployment benefits until early September, are discouraging some people from returning to work.  Many are making as much now as they did when they were employed.  And there’s more government transfer payments to come!

“Many small businesses complain they are not able to reconnect with employees because of these benefits,” said Lindsey Piegza, chief economist at the investment firm Stifel. “We want to be leery of getting a short-term boost that ends up creating longer-term roadblocks.”

Another objection to the new $1.9 trillion aid bill was the aid to state and local governments. The bill would provide $350 billion to state and local governments which have been hit by a loss of tax revenue during the pandemic, causing many to plan cuts to services and warn of tax increases to allow them to balance their budgets. Republicans have slammed the aid as “blue state bailouts,” rewarding Democratic states for poor financial decisions that predated the pandemic and note that many states’ tax revenues have exceeded expectations.

The new bill contains the largest overhaul to the Affordable Care Act in years. It expands eligibility for subsidies to purchase insurance to people of all incomes and caps the maximum premium at 8.5% of a person’s income. It also takes steps to lower, or even zero out, premiums for people making less than 150% of the federal poverty line.

The total numbers are staggering. Cumulatively, the government will hand out $2.2 trillion to workers and families between the two relief bills passed last year and this latest bill, according to the Committee for a Responsible Federal Budget, a nonpartisan group. That’s equivalent to what the government spends annually on Social Security, Medicare and Medicaid combined!

Here’s a breakdown of where that $2.2 trillion has and will go to: 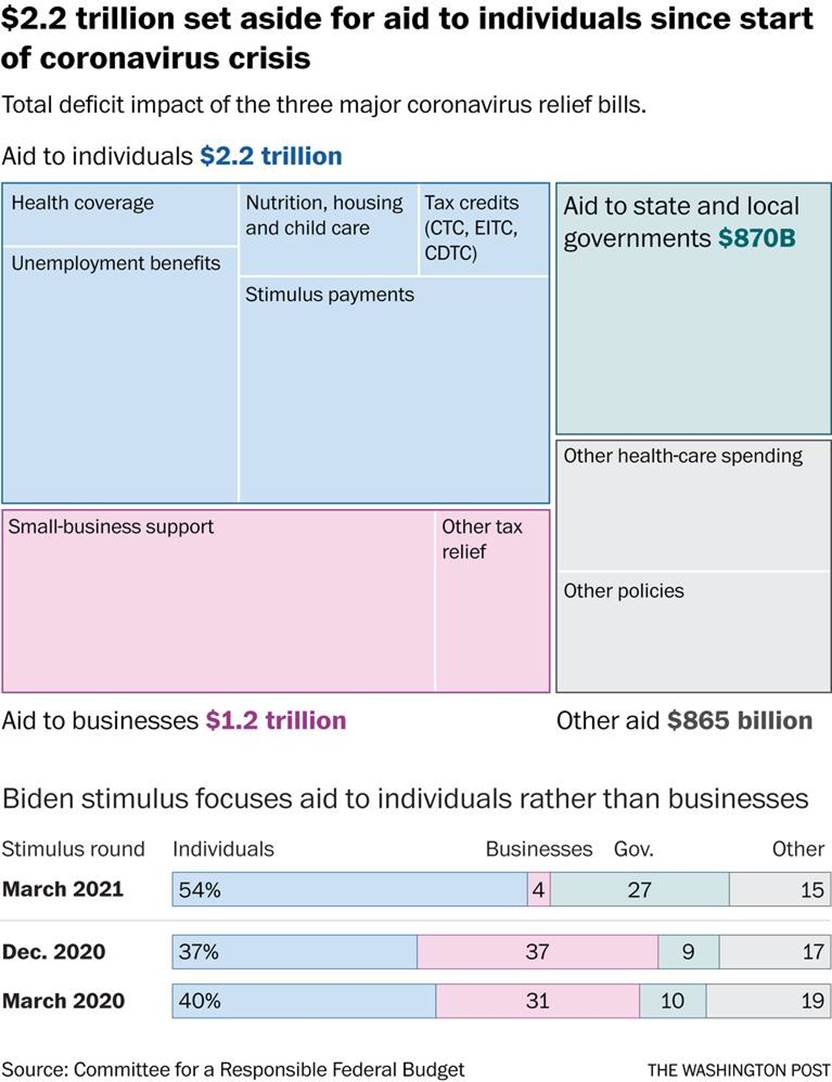 Do you actually think that $1.9 trillion will increase the U.S. federal government deficit? Or will it be funded by new tax revenues in 2021-2022?

Note that 57% of all federal government spending over the last 12 months was unfunded, i.e., deficit spending. That percentage is growing rapidly.  On the current trajectory it would be 80% in 5 years.

U.S. debt will be equivalent to 202% of gross domestic product by 2051 the nonpartisan CBO said on Thursday in its long-term budget outlook.  The forecasts don’t take into account the $1.9 trillion in the new federal spending bill.   It’s important to note that the U.S. debt to GDP ratio has only exceeded 100% twice before in U.S. history.  That was in 1945 and 1946, following a surge in federal spending as a result of World War II.

The U.S. economy is projected to grow 1.8% a year during the next three decades, according to the CBO.  As usual the budget office forecasts NO RECESSIONS over the next 30 years!

A New Era Arrives for Budget Deficits and Debt to GDP Ratio:

Budget deficits will widen to 13.3% of GDP in 2051, from 5.7% in 2031, driven largely by increasing costs of servicing the debt, the CBO said. Net spending on interest will triple relative to GDP in the two decades leading up to 2051, and spending on programs such as Social Security and Medicare will also rise.

However, no Democratic congress members listened to Victor, who in numerous posts cited the dangers the U.S. Treasury would face in servicing the debt via higher interest payments if rates were ever normalized to their multi-decade averages.  Could that ever happen in our lifetimes?

Michael Hartnett, Chief Investment Strategist, BofA Global Research (UK), wrote in a research note to clients that a one-percentage-point rise in Treasury yields would increase the U.S. Treasury’s annual interest expense by the equivalent of double NASA’s budget (which is $23.271 billion in fiscal 2021). Interest costs at one percentage point above the CBO’s baseline estimate would add $9.7 trillion—more than 10 times the annual U.S. defense budget—to the budget deficit from 2021 to 2030. Such worrisome possibilities, the BoA strategists conclude, make some form of Fed yield curve control inevitable.

Hartnett further states that the pervasive and addictive Wall Street-Fed dependency culture (everyone bullish) is extending to a Main Street-U.S. Treasury dependency culture which is increasing with a total of $8 trillion U.S. government spending for stimulus checks, and welfare.  It’s all financed by deficit spending courtesy of the ballooning Fed balance sheet which will soon exceed $8 trillion.  That means asset price inflation mutating into Main Street inflation. This suggests rates are no longer "anchored."

BoA’s conclusion is that the Fed’s financial repression, with low and stable interest rates since the September 2008 Lehman bankruptcy, is about to end.  A new era of financial market volatility is set to begin. Markets will now likely push the Fed via higher yields, according to Harnett.

Chart of the Day: