The closely watched (but mostly wrong) Federal Reserve Bank of Atlanta GDP Now estimates the U.S. economy to grow 7% (or at an annualized rate of 30.8%) in the 3rd quarter. 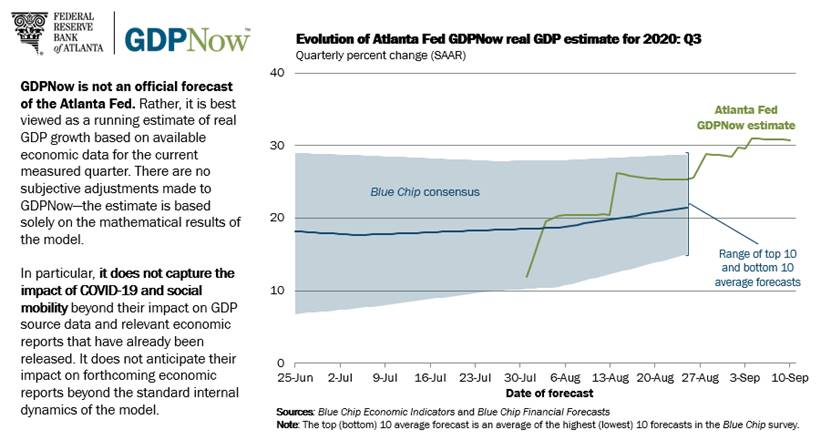 NOTE: GDPNow is NOT an official forecast of the Atlanta Fed. Rather, it is best viewed as a running estimate of real GDP growth based on available economic data for the current measured quarter. There are no subjective adjustments made to GDPNow—the estimate is based solely on the mathematical results of the model.

Victor notes that Goldman Sachs (“the God of Wall Street) is forecasting a 35% annualized GDP growth rate for the 3rd quarter.  "We upgraded our near-term growth forecasts based on the much stronger-than-expected August jobs report and the solid summer data more generally, and our forecast of 35% is now nearly 14 percentage points above consensus," Goldman said.

While the 3rd quarter U.S. GDP growth forecasts look quite good, it comes after a 9.1% non-annualized contraction in the 2nd quarter.  U.S. GDP decreased at a 34.3% or $2.15 trillion last quarter.

After the 3rd quarter rebound, economists expect the U.S. economic recovery to slow to a crawl, with the U.S. economy not returning to pre-coronavirus levels until early to mid 2022.

The picture is similar elsewhere. The United Kingdom reported 6.6% GDP growth in July relative to June but noted that output was still 11.7% lower than in February.  Economists are warning that recapturing all the growth lost in the lockdown will take months as the recovery slows into year-end.

"With most sectors of the UK economy now open, the prospect of large bounces in activity is low. Meanwhile, the fallout from the Chancellor’s plan to end the furlough scheme and the recent pick-up in Brexit anxieties suggest the headwinds to the recovery are beginning to increase," said Nikesh Sawjani, UK Economist at Lloyds Bank.

ING Economics anticipates the U.K. reaching pre-pandemic economic growth levels no sooner than late 2022. The U.K. suffered the most severe decline in output among developed countries during the 2nd quarter, but the month-to-month sequence of decline and recovery has been broadly similar in other “rich” countries.

The global economy contracted for a second straight quarter in the three months through June, with widespread lockdowns and individual efforts to avoid infection dealing a severe blow to activity.

Across the Group of 20 leading economies, the 3.4% decline in output recorded in the first three months of the year was already the largest since records began in 1998, but the second-quarter drop was without precedent in the decades since the end of World War II. 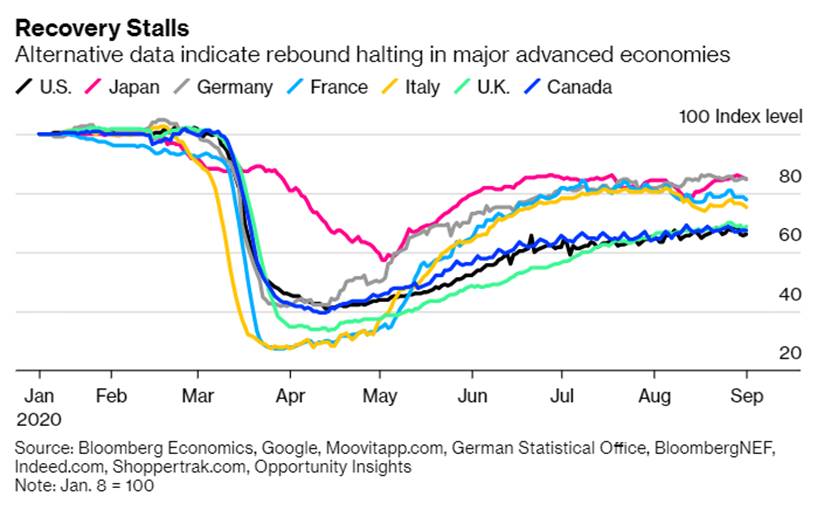 In a blog post Friday, Philip Lane, the European Central Bank’s chief economist, sounded a cautious note on Europe’s stuttering economic recovery and weak inflation rate, leaving open the door to a fresh burst of stimulus in the coming months.

Worldwide, airlines are under tremendous pressure from global government travel curbs and fear of air travel:

• The CEO of Qantas Airlines says flights are operating at only 20% of normal capacity.

• Singapore Airlines is poised to trim another 4,300 jobs as the carrier struggles to recover from the drop in international air travel. The airline’s operations remain in the single digit percentages relative to 2019.

• Lufthansa may further trim its twin-aisle fleet, with the A380, 747-400 and A340 now seen at risk of not returning to service. The carrier could shed 100+ aircraft overall as part of the move, with jobs also at risk thanks to reduced operations.

• Many flights have been cancelled, especially international flights to and from the U.S.

Other Signs of Economic Weakness:

There were signs of economic weakness elsewhere, as fresh outbreaks of the virus prompted new restrictions and additional caution among consumers, with declines in activity recorded in Japan, India, Australia, Kazakhstan, Spain, and Italy. Between them, those countries account for 15% of world output.

While developed nations economies are likely to experience mostly flat growth in 2021 and then recover in 2022, the developing world will take longer to rebound to pre-coronavirus growth readings.

For example, Mexico’s GDP is expected to take between two and six years to recover, according to the deputy governor of Mexico’s central bank.

India’s economic recovery could be stalled for a prolonged period of time, due to the severe lockdowns in that country. The outbreak hit the Indian economy just as it started to witness the start of a recovery from a growth slowdown originating in 2018. Covid-19 restrictions may accentuate this situation.

The prospect of emerging nations lagging industrialized countries in the current coronavirus crisis is an outcome of volatile capital flows along with deterioration in macro indicators in several of those countries.  It remains to be seen when such capital flows will return to pre-crisis levels.

Navigating the immense social, monetary, and financial pressures of such prolonged recoveries will obviously be a major challenge for all governments going forward.

World economies are facing a long slog of retooling businesses, reallocating resources, and retraining workers in industries that are no longer viable. That kind of restructuring could play out for quite some time before we see the sharp economic rebound the global bourses have already discounted in stock prices.

Bloomberg says that “stock markets are vulnerable to disappointment in economic numbers in the coming months amid a gradual curbing of emergency fiscal support.”

“We have seen (the) peak rebound. From now on, the momentum is fading a little bit.”

"Longer term is not looking good right now in terms of support for consumption, and therefore business investment and growth in the U.S. economy.”

Good health, good luck and till next time….