U.S. employers added 1.4 million non-farm payroll jobs in August, the Labor Department's Bureau of Labor Statistics (BLS) reported on Friday. That was lower than the gains of the three previous months (two of which were revised down).

The unemployment rate fell to 8.4% but is 4.9% higher than in February 2020 (before the lockdown took effect in the U.S.). The U.S. economy is operating with about 11.5 million fewer jobs than in February.

The slowdown would have been more pronounced without the hiring of nearly a quarter-million temporary census workers.

The mainstream media failed to report that jobs added the past two months were lower than originally reported:

-->With these revisions, employment in June and July combined was 39,000 less than previously reported.

Note: Monthly revisions result from additional reports received from businesses and government agencies since the last published estimates and from the recalculation of seasonal factors.

Applications for unemployment benefits rose last week, while data from Homebase — which provides time-management software to small businesses — shows that the number of people working has declined since early August.

State reopening of their economies boosted employment this summer, but the gains have cooled in recent months.  Economists expect the initial hiring spurt from business reopening to ease as state restrictions are lifted at a slower pace than earlier in the summer. Further, the number of unemployed individuals saying their layoffs are permanent rose last month to 3.4 million, a headwind to the pace of recovery in future months.

“We’re in a very deep hole, and we’re working our way out of it,” said Gus Faucher, economist at PNC Financial Services Group. “We continue to see very good improvement in the labor market, but I think the improvement is going to be slower going forward.”

The economy continues to face uncertainty with an average of 36,000 new Covid-19 cases a day and an increase ahead of Labor Day weekend, prompting warnings from some governors about persistent risks from the virus.

An increasing number of people reported in the Labor Department’s August survey that they had lost their jobs permanently, rather than being temporarily laid off or furloughed — a sign that the COVID-19 lockdown is doing lasting damage.

“There’s a fragility in the numbers,” said Diane Swonk, chief economist at the accounting firm Grant Thornton. “There are cracks in the underlying foundation.”

Economists suggest that job growth could turn flat or negative in the fall, especially without a new fiscal stimulus.

Fiscal Stimulus Needed, but on HOLD:

Those cracks are appearing as trillions of dollars in federal spending, which helped sustain many households and businesses early in the pandemic, are drying up.  The August jobs data was collected early in the month and might not reflect the full impact of the loss of benefits, economists warn.

While consumers and small businesses urgently need more fiscal stimulus, talks between the White House and Democrats over possible further coronavirus aid have stalled, and as Congress faces an approaching deadline to keep the government running after its current funding expires Oct. 1st.

“I don’t know if there will be another package in the next few weeks or not,” Senate Majority Leader Mitch McConnell (R., Ky.) said at a Kentucky event this week.

Economists warn that without another fiscal stimulus package there likely will be a big drop in consumer spending in the fall, leading to more job losses and a wave of small-business failures. Corporations including American Airlines, United Airlines, Ford Motor and MGM Resorts all announced they are laying off more workers.  Big name department stores like J.C. Penney and Lord & Taylor are going out of business.

Meaningful quality and credibility issues continue to plague the “improving” headline labor numbers. The August 19th preliminary annual downside benchmark revision of 173,000 (-173,000) to March 2020 payrolls will not be adjusted into headline monthly reporting until February 2021.

While August Payrolls gained month-to-month for the fourth month, the monthly slowing in annual decline is taking on the form of an “L”-shaped recovery.

The BLS acknowledged that continued misclassification of “unemployed” persons as “employed” persons in the Household Survey might have reduced a potential headline July U.3 unemployment rate of 9.1% to the headline 8.4%.

“For March through July, BLS published an estimate of what the unemployment rate would have been had misclassified workers been included. Repeating this same approach, the overall August unemployment rate would have been 0.7 percentage point higher than reported. However, this represents the upper bound of our estimate of misclassification and probably overstates the size of the misclassification error.”

Whatever the difference, official headline unemployment was understated meaningfully for the sixth straight month, due to survey “misclassifications.” Headline U.3 unemployment dropped to 8.42% in August, from 10.22% in July, headline August U.6 declined to 14.24% from 16.53%, with the headline August ShadowStats Alternate Measure, on top of U.6, at 28.0%, down from 30.0%

The BLS unemployment numbers are not at all reliable. One could say they are “made up” to paint a positive political picture. (You all know this is an election year).  Permit me to cite one example of obvious questionable truth: the number of jobs added by new businesses.

The monthly payroll numbers and unemployment stats are reported on a “seasonally adjusted basis.”  According to BLS, that’s to smooth the reports for public consumption.

The reported jobs “created” for August were 1.371M, but the NOT Seasonally Adjusted (NSA) new jobs were actually a little higher that month at 1.535M.

More importantly, the “assumption” of new jobs created from NEW businesses is estimated (never counted), according to the “Birth Death (BD) Model,” developed in the 1980s.

It gets even more convoluted. The BLS has recently made changes to the BD Model to reflect the widespread disruption to labor markets due to the COVID-19 pandemic.  The August 2020 BLS estimates for BD Model jobs added are: 154K with adjustment vs 104K without adjustment.

That is a difference of 50K new non-farm payroll jobs supposedly added in August AFTER ADJUSTMENT.

In other words, the BLS adjustment to correct the BD Model “jobs added,” has made it even more incorrect!

I leave it to the reader to decide if the reported BLS job numbers are accurate.  My personnel belief is that the numbers are almost completely contrived. To think that entrepreneurs would START NEW businesses, ADDING an average of 111,700 NSA jobs per month (?) when the economy is in lockdown seems extremely farfetched.

This seems to be an example of “fake news,” or disinformation from the U.S. government (rather than from social media sources or Russia).

This quote captures the essence of the BLS’s inaccurate reporting of the jobs numbers:

“We’ll know our disinformation program is complete when everything the American public believes is false” — William Casey Director of the C.I.A. (1981-1987) at an early February 1981 meeting of the newly elected President Reagan in the Roosevelt Room of the WH with his new cabinet secretaries.

A corollary quote, from Thomas Sowell, is depicted in this graphic: 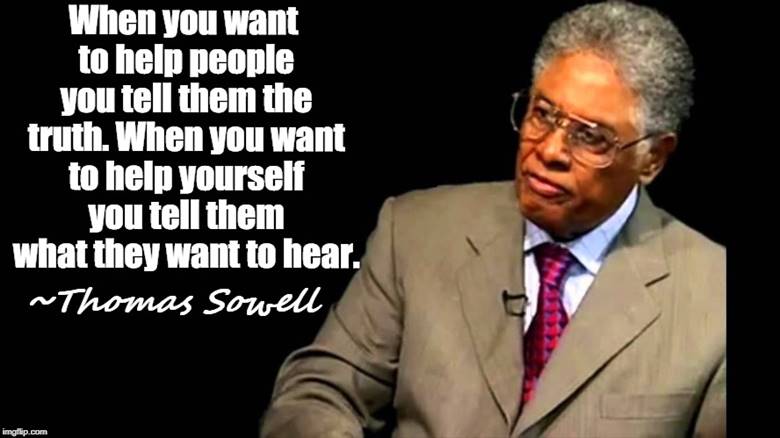 Thomas Sowell is an American economist and social theorist who is currently a senior fellow at Stanford University's Hoover Institution.

Be well, healthy, and safe. Good luck and till next time……..