Today was truly momentous regarding the many coronavirus related announcements that show the U.S. and the global economy will be hit much harder than previously thought. The IMF once again downgraded its global growth forecast.

·      At last count, there were 196,030 COVID-19 cases in California, including 5,724 deaths. CA infections are speeding up:  more than 190,000 people in CA have tested positive for the coronavirus, with nearly 28% of the total cases reported in the last 14 days. John Swartzberg, an infectious disease expert at UC Berkeley, said increased testing accounts for part of it, but that “testing alone is insufficient to account for the increase in the number of cases.”

Let us start out with U.S. government negligence, which seems pervasive. Nearly 1.1 million coronavirus stimulus payments — totaling nearly $1.4 billion — were sent to dead people, according to a congressional independent report released Thursday June 25th. The U.S. Government Accountability Office (GAO) said that U.S. Treasury and IRS officials did not use “death records to stop payments to deceased individuals for the first three batches of payments because of the legal interpretation under which IRS was operating.”

The report also stated: “The Internal Revenue Service (IRS) and the Treasury moved quickly to disburse 160.4 million payments worth $269.3 billion. The agencies faced difficulties delivering payments to some individuals, and faced additional risks related to making improper payments to ineligible individuals, such as decedents, and fraud. According to the Treasury Inspector General for Tax Administration, as of April 30, 2020, almost 1.1 million payments totaling nearly $1.4 billion had gone to decedents. GAO recommends that IRS should consider cost-effective options for notifying ineligible recipients how to return payments. IRS agreed.”

When the U.S. Treasury learned that payments had been made to dead people, Treasury and the IRS determined that people are not entitled to a payment if they are dead at the time the payment is made, and Treasury instructed the IRS to stop issuing payments to deceased individuals, according to the GAO report. The report says that the stimulus payments to dead people could be considered improper payments under a 2019 law.

The U.S. economy shrank at a 5.0% rate in the first quarter with a much worse decline expected in the current three-month economic period, which will show what happened when the pandemic began spread across the U.S. A revised government estimate found that consumer spending in the first quarter was weaker than previously thought.

The Commerce Department reported Thursday that the decline in the gross domestic product, the total output of goods and services, in the January-March quarter was unchanged from the estimate made a month ago.  The 5% drop was the sharpest quarterly decline since an 8.4% fall in the fourth quarter of 2008 during the depths of the worst financial crisis since the Great Depression.

Federal Reserve officials and private-sector economists believe that GDP plunged around 30% from April through the June (2nd quarter). Economists surveyed by MarketWatch expect a decline at a 29.5% annual rate. The data will be released on July 30th.

That would be the biggest quarterly decline on record, three times bigger than the current record-holder, a 10% drop in the first quarter of 1958.

2. California unemployment claims on the rise:

CA Gov. Gavin Newsom on Wednesday. June 24th declared a budget emergency to ensure the availability of funding for personal protective equipment, medical equipment and other expenses as the state continues grappling with the coronavirus. The proclamation “clears the way for the Legislature to pass legislation allowing the (largest populated U.S.) state to draw from the CA’s “rainy day” fund to help California continue to meet the COVID-19 crisis,” Newsom’s office said in a statement. The proclamation is needed so California can tap its contingency reserve funds, a key component of the state budget deal that Newsom and legislative leaders agreed to this week.

Texas Gov. Greg Abbott announced Thursday that the state will pause any further reopening as it continues to report record increases in Covid-19 cases and hospitalizations.

Businesses that were permitted to open under the previous phases can continue to operate at the designated occupancy outlined by the Texas Department of State Health Services, according to statement from Abbott’s office.

Texas is one of the states in the American West and South experiencing a recent surge in Covid-19 cases. On Wednesday, the state reported more than 5,500 additional Covid-19 cases.

The International Monetary Fund (IMF) has once again lowered its global growth forecast for this year and next in the wake of the coronavirus pandemic.  It now predicts a decline of almost 5% in 2020, substantially worse than its forecast only 10 weeks ago in April.

The recession caused by the pandemic - globally and in many individual countries - is likely to be deeper than the IMF previously thought. 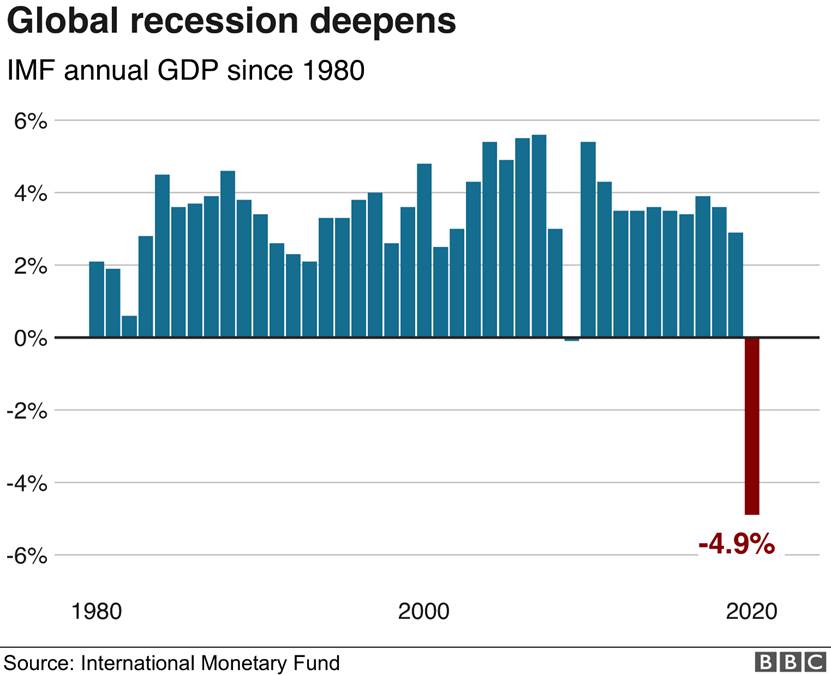 The IMF’s gloomier outlook partly reflects the fact that data since April have pointed to a sharper downturn than its earlier forecast envisioned.  The global central bank now expects a larger hit to consumer spending which is somewhat unusual. Consumer spending usually takes a much smaller hit in a downturn than business investment.  But this time, lockdowns and voluntary social distancing by people who are wary of exposing themselves to infection risks have hit demand.

The IMF also expects people to do more "precautionary saving," which will reduce their consumption because of the uncertain outlook ahead, especially for jobs and business re-openings and staying open.

More firms going out of business and people being unemployed for longer may mean that it is harder for economic activity to bounce back as quickly as many optimists had hoped.

There is also a danger that, the efficiency of surviving businesses is likely to be undermined by the steps they must take to improve safety and hygiene - to reduce the risk of workplace transition of the coronavirus.  (Restaurants implementing social distancing protocols and extra cleaning is the best example we can think of for such coronavirus impacted firms.)

The Fed on U.S. Economic Risks:

“One risk is that consumers and businesses react to the new uncertainty introduced by the virus by pulling back on consumption and investment with the goal of building precautionary buffers against future disruptions. While rational at the individual level, such a pullback can hamper growth across the wider economy.

Another risk comes from the global economy. Foreign demand for U.S. exports had already been weak for some time before the crisis. Now, with the virus rolling across foreign economies at varying times and intensities, it seems unlikely that we should expect much support from overseas as our economy picks back up.

Finally, while fiscal policy is currently providing substantial support for growth, there is a risk that the impetus from fiscal policy will turn negative before the recovery has been fully realized. The coronavirus pandemic has created serious financial consequences for state and local governments, which unlike the federal government, must balance their budgets. In the near term, governments are facing liquidity challenges, as many tax deadlines have been postponed, leading to massive drops in income tax collections this spring. Also, shelter-in-place orders have sharply reduced consumer spending, thereby lowering sales tax collections. While state revenues are under pressure, the demand for state services, including spending on medical supplies and temporary health facilities, is growing.”

While significant, all of what was reported today is just “a drop in the bucket.” The real concern is that this does not seem to be going away. My conference in San Diego is now virtual. We will be working remote until at least September. Travel is going to remain restricted so no vacationing.

I really do not think people realize how serious this virus is going to be once it really gets going (i.e. 2nd wave of cases). The Fed has done a great job propping up the stock and credit markets (see chart below), but the economy may be in trouble for years.

The disconnect between financial markets and the real economy can be illustrated by the recent decoupling between the soaring U.S. equity markets and plunging consumer confidence (two indicators that have historically trended together), raising questions about the rally’s sustainability if not for the boost provided by the Fed and other central banks.

This divergence increases the probability of another MAJOR correction in risk asset prices should investors’ bullish and complacent attitudes change. Such a negative wealth effect would pose a very real threat to any economic recovery.  As we’ve noted in many previous Curmudgeon posts (with tables) bear equity market rallies have occurred in the past during periods of significant economic pressures, only to unwind quickly and sharply (like a falling knife or waterfall decline).