In today’s financial markets, risk is now a thing of the past. Rather than buy cheap and sell what is dear, analysts today only know one word: BUY.  Let’s look at a few examples.

“All over the world, markets are falling in love. Buy it. Buy it all,” reads the headline of his note.

Stimulated by the never-ending hype of the U.S.-China trade deal and Boris Johnson’s election victory in the U.K. (which presupposes that Brexit will get done by January 31st EU extension deadline), Rupkey wrote:

“There is some smoke and mirrors here, but it looks like this is the time for investors around the world to throw months of caution to the winds and take risk off the table, and they are, buying stocks and selling bonds with abandon, as the economic outlook brightens and central banks shelve their plans to cut interest rates further.”

Rupkey says investors piling into stocks will be armed with a 2020 outlook that “looks better than it has in months,” as he thinks the U.S. manufacturing recession possibly closer to ending that beginning. Equally, he thinks the world economic outlook looks good for next year and beyond.  “Take risk off the table as a concern to be hedged. There is no risk. Bet on it,” he wrote.

The author of that piece, Jack Hough, wrote: “The broader record suggests that when it comes to price action alone, “buy high, sell higher” is probably better advice….. So don’t feel the need to ignore a vast universe of rising stocks now, and focus bargain hunts on a small bunch of stinkers.”

He goes on to list seven stocks that gained significantly more than the S&P 500’s median advance of 4.3% over the past three months and have free-cash-flow yields safely above the index’s median of 3.7%.  (We don’t recommend buying any individual stocks so are not listing the names).

This afternoon’s MarketWatch lead story is titled: “Why Wall Street sees the stock market on the verge of a ‘melt-up’.”

Analysts at Bank of America Merrill Lynch, led by chief strategist Michael Hartnett, described the market as “primed for Q1 2020 risk asset melt-up,” with the Federal Reserve and the European Central Bank still providing ample support to portions of the market and economy that have shown some signs of softness. Hartnett expects that the S&P 500 will hit a target of 3,333 by March 3, 2020 in what he calls a “front-loaded” 2020. 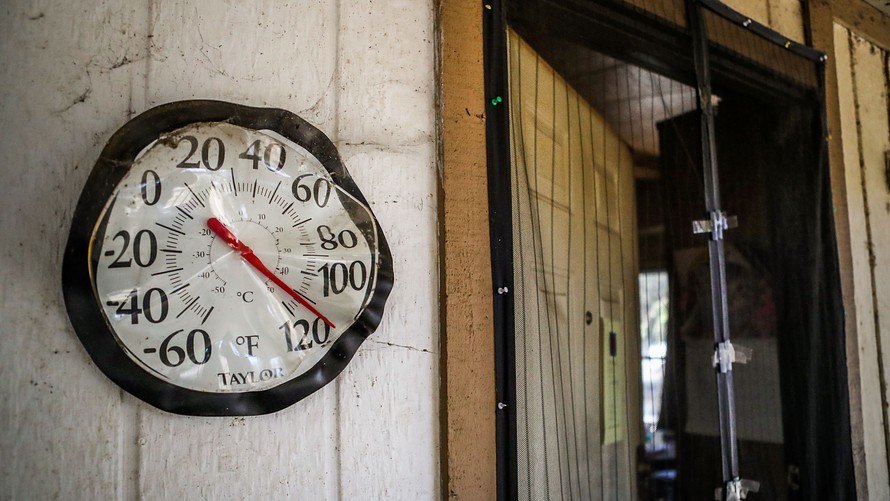 UBS Global Wealth Management Chief Investment Officer Mark Haefele said that a partial Sino-American trade resolution contributes mightily to the bullish thesis that a number of strategists have adopted. “This could unlock further upside for equity markets, driven by an improvement in business confidence and a recovery in investment,” Haefele wrote.

The "melt up" chatter is ramping up. A few more days like this and we could challenge the early '18 euphoria. 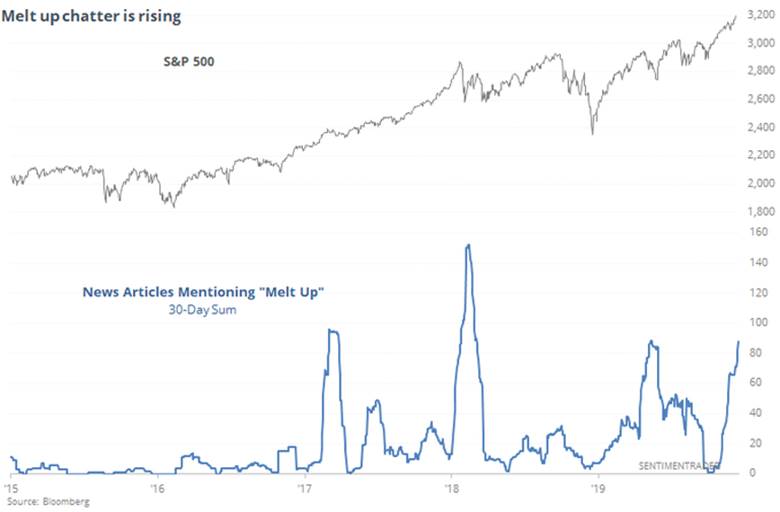 A call by some market participants and strategists/analysts for further gains for equity indexes comes as the S&P 500 has gained nearly 27.3% in the year to date, the Dow has returned about 21% so far this year and the Nasdaq has produced a year-to-date return thus far of about 33%, according to FactSet data.

A so-called melt-up is considered by market pundits as the end phase of an asset bubble and is usually, but not always, followed by a significant downturn in stock values. Strategists have predicted melt-ups a number of times over the past 18 months, despite concerns growing about slowing U.S. economic growth in its record-setting 11th year of expansion and weak corporate profits (see below).

Big investor complacency is clearly illustrated by the huge fall in the VIX this year.  The CBOE Volatility Index (VIX) is on track for a 54% decline in 2019, which would mark the gauge of coming volatility’s worst yearly drop on record. The index tracks bullish and bearish options on the S&P 500 for the coming 30-day period and has tumbled below a reading of 12, well below its historical average of about 19. The index tends to rise when stocks fall and vice versa.  The VIX closed today at 12.14 which is close to a multi-year low.

Conversely, the S&P 500 and Nasdaq closed at yet another all- time high today. They are on track to notch their best annual gains since 2013, despite the fact that YoY profits are down for both indexes!

“However, the percentage of S&P 1500 (large-, mid- and small-cap) companies with positive forward EPS growth has deteriorated meaningfully since 2018,” Morgan Stanley analysts wrote.

“Further, the current level of this measure is worse than it was during the 2015–2016 manufacturing recession, a trend driven mainly by smaller-capitalization companies which are struggling with higher labor costs,” the investment bank said.

We could go on and on about the disconnect between earnings (and other economic fundamentals) vs stock prices, but we’ve already pounded the table so much on that topic it is about to break.

"It's fair to say that [the rally] may be more due to the balance sheet reversal [i.e. "NOT QE"] than fundamentals since the real signs of bottoming have come from international PMIs (Purchase Manager Index) rather than the US."