In last week's Curmudgeon article we forecast that U.S. GDP growth would not top 2% and that corporate profits would not increase significantly next year, even if the fiscal cliff were to be avoided. We left it to the reader to determine how that might affect stock prices, with the assumption that the GDP growth rate influenced corporate profits which in turn drove stock prices. Growth in profits along with expected return from alternative asset classes, especially fixed income, are commonly thought to be the main drivers of equity prices.

But recent studies show that corporate profits really don't have a significant effect on stock prices- at least not during any period less than an entire decade (or longer)!

Take this past year as an example. The domestic economy has grown at an annual pace only slightly above 2%, quite subpar by historical average of 3.5%. Overseas, the picture is worse: Japan is teetering on the brink of yet another recession, Europe is burdened with a sovereign debt crisis and the Euro-zone's economies are contracting (Greece and Spain are in a depression). China’s growth has slowed markedly; raising concerns about global growth in the future. Yet against this bleak backdrop, United States stocks, as measured by the S&P 500 have returned 15 percent this year. Stocks traded in Europe have gained 18 percent and Asian stocks are up more than 12 percent (more if Japan is excluded).

That seems like a huge disconnect, but only if you believe that earnings drive stock prices. Let's look at a few studies that show that's not the case.

1. Gerstein Fisher of Real Life Finance analyzed the historical relationship between GDP growth and stock price performance in eight major developed and developing countries between January 1, 1993 and December 31, 2010 (see charts in this article).

2. Roger Aliaga-Díaz, senior economist at the Vanguard Group recently studied returns on equities going back to 1926, looking specifically at the predictive power of important variables. Those include market price-to-earnings ratios, growth in gross domestic product and corporate profits, consensus forecasts for GDP and earnings growth, past stock market returns, dividend yields, interest rates on 10-year Treasury securities, and government debt as a percentage of GDP.

Their conclusion was that none of these factors came even remotely close to accurately forecasting how stocks would perform in the coming year. "One-year forecasts of the market are practically meaningless," Mr. Aliaga-Díaz says. Even over a 10-year time horizon, considered by many investors to be long term, only P/E ratios had a meaningful predictive quality. Over an entire decade, economic fundamentals like G.D.P. and corporate earnings growth had even less predictive power over future returns.

Since 1926, those ratios, based on 10 years of averaged earnings — a gauge popularized by the Yale economist Robert J. Shiller — explained roughly 43 percent of stocks’ performance over the following decade. Of course, "that means about 55 percent of the ups and downs in the market can’t be explained by valuations," Mr. Aliaga-Díaz says.

3. Longtime colleague Mike Dever of Brandywine Asset Management writes that the apparent intrinsic return from investing in U.S. stocks over the past 100+ years was really just the result of two primary factors: 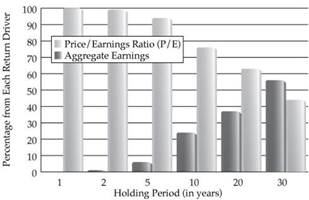 The graph above shows that in any period of less than ten years, earnings accounted for less than 25% of the price change in the S&P 500 Total Return index, while changes in the P/E ratio accounted for more than 75% of this price change. It is only over the longest periods of time that earnings become the dominant return driver for equities.

For more on this, please see:

With more and more of the volume on various stock exchanges dominated by hedge funds, HFT firms and various other financial institutions, their collective sentiment (or short term market mood) has become the primary factor that determines stock prices in the short and intermediate term. With seemingly inexplicable short term up and down moves, increased correlation between individual stocks and asset classes, the equity market has become more and more of a "crap shoot" or casino for individual investors. Recognizing that reality, individual investors have substantially cut back on their stock and equity mutual fund ownership over the last several years.

Apparently, it is more important to ascertain the mood of the market than any other variable or potential determinate of stock prices. And that market mood or collective sentiment can turn on a dime, with no trigger, catalyst or logical explanation. Once again, caveat emptor.